Only 50% of the workers at three major CSSC yards have returned to work amid the impact of the spreading disease, while the ratio at their smaller peers may be even lower. No wonder Cansi, China’s shipbuilding association, is warning of the risk of delivery failures 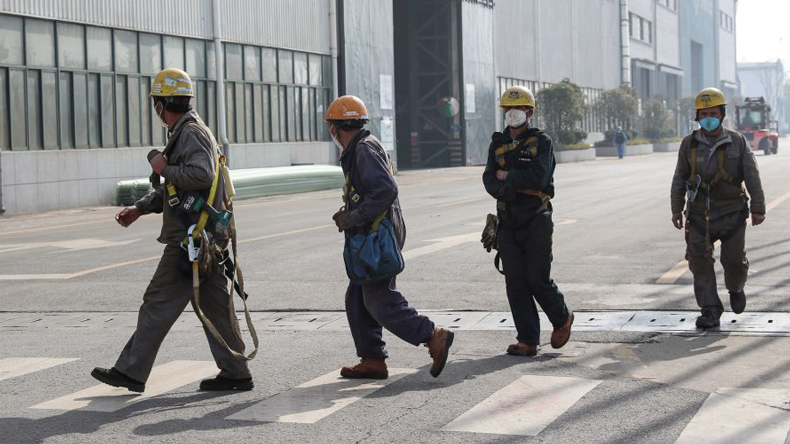 Source: STR/AFP via Getty Images Masked shipbuilding employees at Nantong on Tuesday: Yard workers have been slow to return to work after an extended Chinese New Year holiday amid the impact of coronavirus.

WITH the coronavirus fears, you may wonder how many shipyard workers in China have returned to their positions after the holiday extension.

Even so, this figure is likely to be better than lots of their domestic peers. As the major units under state conglomerate China State Shipbuilding Corp, the trio are equipped with abundant anti-virus provisions. And an array of vessels on their orderbook make them high on the government agenda that seeks to minimise economic impact while curbing infection.

Jiangnan, for example, was said to have prepared more than 500 isolated rooms to quarantine suspected patients. By comparison, some smaller privately-run yards cannot even garner enough facemasks.

Nevertheless, delays in delivery seem inevitable, even for the big players.

Chen Jun, general manager of Hudong-Zhonghua, told China Ship News, an internal publication of CSSC, that schedules of the company’s 18 vessels being built (including a number of ultra-large containerships and large liquefied natural gas carriers) are affected by the disease outbreak.

What is worse, some newbuilding contracts may be scrapped for regulatory reasons.

In an advisory to member companies on Tuesday, the country’s shipbuilding association, known as Cansi, warned of the incompliance risks in relation to the Goal-Based Standards.

But some of these non-GBS ships at Chinese yards that are reeling from the virus onslaught may fail to beat the delivery deadline this year, said Cansi.

These vessels will be required to make changes in designs and construction and “may enter a severe situation where they cannot be delivered”, the group added.

Recommendations by Cansi include timely reports to the shipowners and seeking protection from force majeure or “Act of God” clauses.

The same advice has also been given to domestic ship repair yards that are also feeling the impact of the epidemic. This is revealed in a recent Cansi survey over 200 ship repairing/retrofitting projects in China.

Foreign owners are behind more than 90% of these projects, and they do not appear to compromise easily.

Less than 1.5% of the owners have modified the contracts to ensure the fulfillment, the results showed, while the other 1.5% explicitly rejected the force majeure argument. The remaining majority have shown sympathy, yet are lacking commitment.

A bigger trouble will derive from “a tradition” between yards and their “old friend customers” that the contract for repairing a single ship is normally signed upon the delivery, Cansi noted. The situation obviously will leave many Chinese yards unprotected if the owners choose to walk away from delayed projects.

It is time to review the old saying: a friend in need is a friend indeed.

But Cansi seems not to be optimistic. It has asked the repair yards to be braced for a “heavy blow” in the coming three months.