As much as 1m barrels per day was shipped out of Iran in January, mostly via under-the-radar shipments, according to data monitored by oil traders

Large gaps in a tanker’s automatic identification signal in areas and over periods where it could have called in Iranian waters remain unaccounted for. Its flag registry has decided to de-flag the vessel

Ships suspected of carrying Iranian energy cargoes, such as oil, are under intense scrutiny.

THE Emirates-based Gabon registry has deflagged the aframax tanker Nadezhda (IMO 9254915) for shipping sanctioned Iranian oil, saying the shipowners had failed to fully answer questions about the vessel’s suspicious movements.

Intershipping Services, which operates the registry on behalf of the Gabonese Republic from headquarters in Amjan, is the newest flag of convenience used by owners and operators of a subterfuge fleet of Iranian-controlled foreign-flagged tankers.

It received the concession in September 2018, and has 97 vessels registered. The vessel Nadezhda was its biggest of the four tankers flying the Gabonese flag.

There is no suggestion other vessels in the registry are linked to Iran.

Some 100 tankers, including about 60 flagged by Iran or owned by the National Iranian Shipping Co, are at the centre of an international logistics chain that is funnelling under-the-radar exports of crude and condensate to its main customers, Syria and China.

The foreign-flagged, Iranian-controlled tankers and liquefied gas carriers have reflagged to Panama, Honduras, Pilau, and Belize in addition to Gabon in the past two months, while also changing vessel names and ownership along the way. The flag-shopping, name-changing tactic is one of many used to evade scrutiny of shipments as the US steps up its “maximum pressure” rhetoric on the Islamic Republic.

“The response we received from the owners was not compelling,” technical manager Capt Karan Kapoor told Lloyd’s List about large gaps in the tanker’s automatic identification signal in areas and over periods where it could have called in Iranian waters. The vessel’s managers had signed an agreement to comply with all sanctions, Capt Kapoor added, with the deflagging decision made on February 7.

As much as 1m barrels per day was shipped out of Iran in January, mostly via under-the-radar shipments, according to data monitored by oil traders and also imagery from Tankertrackers.com, which released one satellite photo on February 7 showing the tanker Nadezhda undertaking ship-to-ship transfer off Kharg Island on January 13. 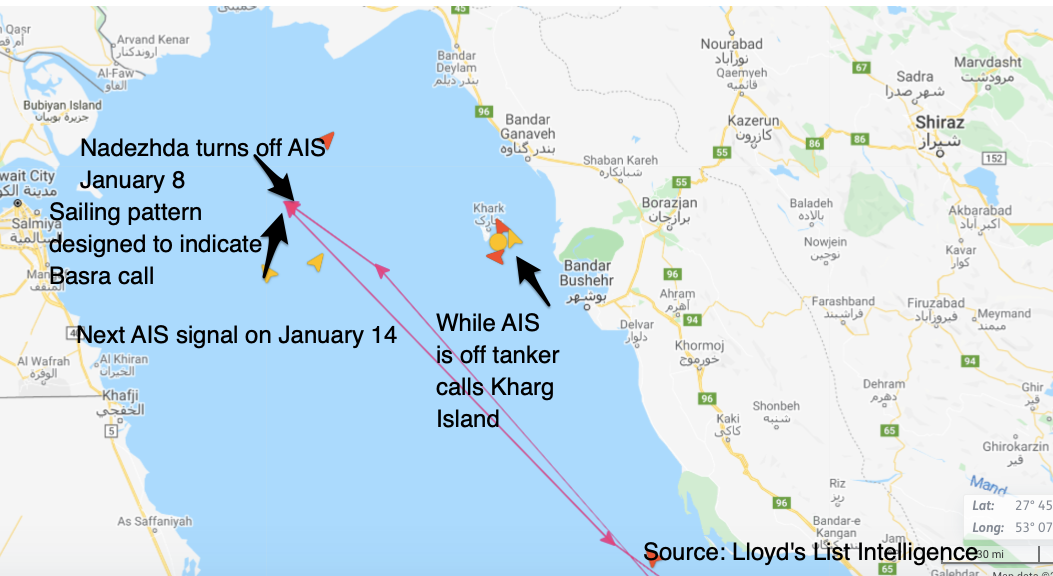 Without this technology to detect subterfuge shipments, conventional estimates would place exports at some 200,000 bpd based on movements of the NITC tanker fleet — a fifth of what is being shipped.

That same company also managed Grace 1, the very large crude carrier detained controversially in Gibraltar over July for shipping Iranian crude to a Syrian refinery in breach of European sanctions.

Last November, the registered owner changed along with the tanker’s name, to Nadezhda Tankers Incorporation, with Apex Tanker Ship Management taking over technical management. The flag switched to Gabon from Panama and the vessel was no longer entered with P&I insurers Swedish Club.

Some 60 are either owned by NITC, or flagged in Iran, and are therefore sanctioned. But the remaining 40 or so ships, including the tanker Nadezhda are still plying Iran-to China or Iran-to-Syria trades, switching off AIS and conducting a complex range of ship-to-ship transfers in order to disguise the origin and destination of cargoes.

At the time of writing, Nadezhda was off the coast of China, signalling Qidong as its next port call. It’s unclear whether its reflagged or is able to discharge.