Iran calls for review of tanker safety after Sanchi report

In a submission to the International Maritime Organization, Iran is calling for a review and update of tanker safety after carrying out a simulation of the conditions on board Sanchi following the vessel's collision with a bulk carrier in January 2018

The fire and thick smoke that engulfed the tanker within minutes would have made it impossible for any crew member to survive, Iran says in submission to IMO ahead of a sub-committee meeting in March 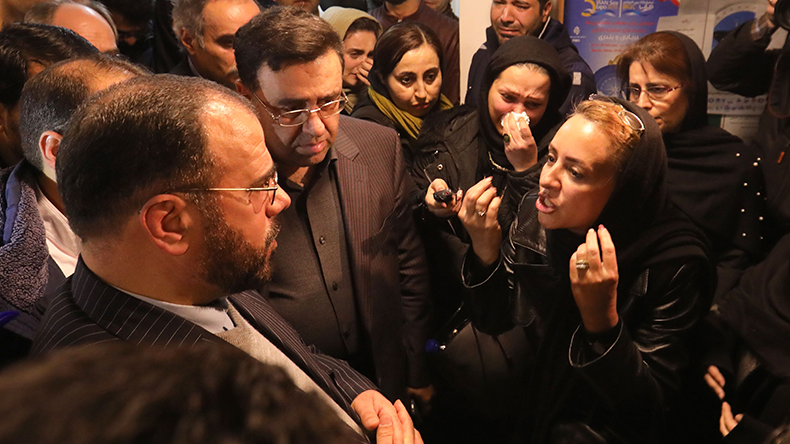 Source: ATTA KENARE / AFP via Getty Images Iranian friends and relatives of the Sanchi crewmen, who were aboard it when it collided with a cargo ship off China, react inside Iran's International Oil Tanker Central building in the capital Tehran following news of its sinking, on January 14, 2018.

IRAN is asking International Maritime Organization member states to review and update tanker safety following a study conducted by the University of Tehran into the conditions aboard Sanchi after it collided with a bulker two years ago.

In a submission to the IMO ahead of a sub-committee meeting on ship systems and equipment being held in London in early March, Iran said the fire and thick smoke that engulfed the vessel within minutes meant it was impossible for any of the crew members to survive.

The collision between the Panama-flagged Sanchi and the Hong Kong-registered CF Crystal bulk carrier on January 6, 2018, was said to have claimed 32 lives — 30 Iranians and two from Bangladesh — who were working on the tanker. Three bodies were retrieved in the aftermath of the incident.

The collision in the East China Sea left the tanker, which was carrying gas condensate from Assaluyeh in Iran to Daesan in South Korea, in flames for more than a week following an explosion from leaking cargo.

Iran said in its submission to the IMO that the “supporting evidence and technical facts do not support survival of the crew on board Sanchi”.

Late last year, families of the victims claimed that they had been contacted by some survivors who were being held involuntarily. They were filing a lawsuit in the US against Iran's national tanker company for what they called a cover-up.

The study, which used fire and smoke modelling in simulation scenarios, was carried out by the University of Tehran and the tanker's operator, the National Iranian Tanker Co. It showed that the engine room would have filled up with smoke and soot in less than three minutes. This was “not a safe place” for crew members who were breathing toxic air.

The “intolerable breathing conditions” will have caused choking and unconsciousness, it said.

Likewise, the high temperatures from the fire and the thick smoke would have reached the accommodation space within minutes, depriving the crew of any response time, it added.

The IMO’s Safety of Life at Sea convention requires smoke detectors and alarm systems to be installed in stairways, corridors and escape routes in accommodation spaces.

In the case of Sanchi, there were no sensors in the outer space adjacent to the accommodation, making it difficult to identify “safe” zones.

Data acquisition sensors currently installed in safety systems in accommodation spaces of ships, as well as new sensors, could be connected to the Voyage Data Recorders, which would be useful in casualty investigations, the study revealed.

Iran is asking member states to consider the information in the study and the lessons learned from the accident investigation report and direct the relevant working groups “to conduct risk assessment and upgrade the safety conditions on board tankers and other ships of similar nature, in order to prevent such tragic loss of lives”.

Families of Sanchi victims file lawsuit in US against NITC

A year on, have Sanchi lessons been learned?