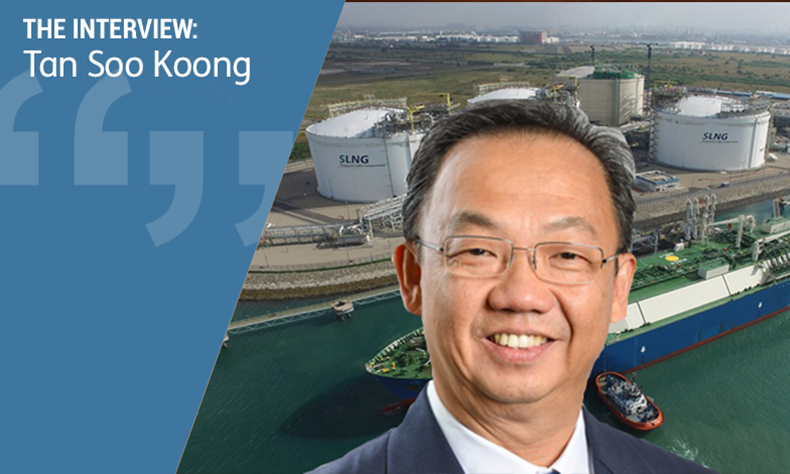 Having built an illustrious career in the oil and petrochemical trade, SLNG chief executive Tan Soo Koong has moved on to invest time in boosting LNG adoption in maritime and other sectors aside from power generation. He is confident the lack of gas resources would not hold back Singapore from asserting its claim as Asia’s LNG trading hub.

AS with many veterans within the energy trade, Tan Soo Koong has spent most of his decades-long career honing industry know-how in the oil and petrochemical business before moving on to the liquefied natural gas sub-sector.

Mr Tan crossed over from Vopak Singapore to helm SLNG, the operator of Singapore’s only LNG terminal, about nine months ago.

Jurong Island at Singapore hosts Vopak’s largest tank terminals by capacity outside of the Netherlands.

The experienced oil man has no qualms about acknowledging that he has mostly been exposed to “liquid bulk storage” business in the past 10 years.

But he also makes clear the decision to leave Vopak Singapore for SLNG was motivated by a new career goal.

“It is my ambition to support and contribute to the adoption of LNG as a cleaner-burning fossil fuel,” he tells Lloyd’s List.

The former Vopak senior executive is echoing sentiments of other business leaders shouldering the same responsibility of guiding the oil and gas industry through a global green movement.

Mr Tan, like other veterans, certainly has a lot to offer even if the world at large is looking to eventually move on from dirty oil.

Take the mandatory low-sulphur transition that the International Maritime Organization imposed on shipping from January 1, 2020.

He certainly relishes this new challenge, which has arrived at a timely juncture.

Tasked to run the port nation’s sole facility of its kind, SLNG’s primary objective has been defined from the start as ensuring Singapore’s energy security by securing gas supplies, especially for the country’s power grid.

SLNG’s senior management are satisfied, though, that six years into its inception, the terminal operator has stabilised its operations.

So, it is time to look at how the terminal can pursue the second goal of asserting its position as a prime LNG trading hub in Asia.

SLNG’s terminal stands out as the first large-scale tank storage in Asia to have offered multi-user access.

One method to boost LNG trade volume is to develop the use of the supercooled fuel outside of the power generation sector.

“Along with the energy security objective, we have also been considering what’s next for us especially looking at LNG as a transition fuel, Singapore’s role as a maritime hub and concerns over climate change.”

French shipping line CMA CGM may have named its home port, Marseilles, as the refuelling point for a series of newbuilding dual-fuel 15,000 teu boxships. But the December statement reiterating CMA CGM’s LNG marine fuel supply deal with Total has specifically mentioned that the latter would provide a similar bunker solution to the former in Singapore.

The International Maritime Organization’s secretary-general, elected for a second term until the end of 2023, has overseen an extremely busy four years that were spearheaded by the switch into a new low-sulphur era. He is confident the IMO has done well under his leadership, but the next four years will see even more straining challenges and will require him to...

Singapore-headquartered Eastern Pacific Shipping is the other major shipowner to have invested heavily in building LNG dual-fuelled boxships, a significant number of which have secured charters with CMA CGM.

SLNG completed the modification of one jetty early last year to supply LNG bunker barges and other small carriers.

In hindsight, its decision to proceed with this modification work back in 2017 has paid off and now puts it in a legitimate position to beat rival LNG terminal operators in the region to bunker ocean-going cargo ships.

Still, to put things in perspective, LNG-fuelled fleet development has not really taken off.

Like many of his industry peers, Mr Tan holds an optimistic view of LNG adoption as marine fuel.

“LNG offers much better carbon credential compared with presently feasible alternatives shipowners may have to comply with IMO 2020.

“The challenge of finding a solution to properly dispose of waste water — a by-product from using scrubbers — is a big one, so explains the general view that this abatement technology is good only for the interim.”

Critics of LNG have questioned whether its use as a marine fuel may deliver a halving of carbon dioxide as outlined in IMO’s emission reduction goal for 2050.

But the regulatory watchdog for international shipping has also spelled out the aim of lowering carbon intensity by at least 40% from the industry by 2030.

LNG proponents have alluded to this 2030 target as one goal international shipping can achieve by switching to the supercooled fuel.

To Mr Tan, LNG wins hands down over compliant fuel oil when it comes to meeting regulatory requirements set out for 2030.

He also flags fuel cost savings for shipowners that have gone ahead to build LNG-fuelled vessels.

“Everyone expects the LNG market will be long in the next eight to 10 years,” he says.

This consensual view builds on the massive volume of new LNG export capacity that has been sanctioned so far and a drastic slowdown in the expansion of world’s energy demand following years of trade tension between the US and China.

All these point to one inevitable consequence — LNG prices are likely to stay competitive vis-à-vis other fuel alternatives in the coming years, the SLNG executive suggests.

He also believes Singapore can develop into Asia’s LNG hub.

Resource-poor Singapore does not produce any natural gas or rank among top LNG exporters and importers.

But Singapore has emerged as the hub for Asia’s oil trade despite not having pumped out any barrels of crude oil.

The massive refining capacity on Jurong Island has no doubt helped bolster oil trades done out of Singapore.

However, Mr Tan points out that Singapore’s trade volume far surpasses its refining output because intra-Asia trades flow through the port nation, which has benefited for centuries from its good geographical location.

“Looking at LNG, I foresee it as a trend in terms of Singapore being a trading and bunkering hub because all the major trades pass by Singapore.”