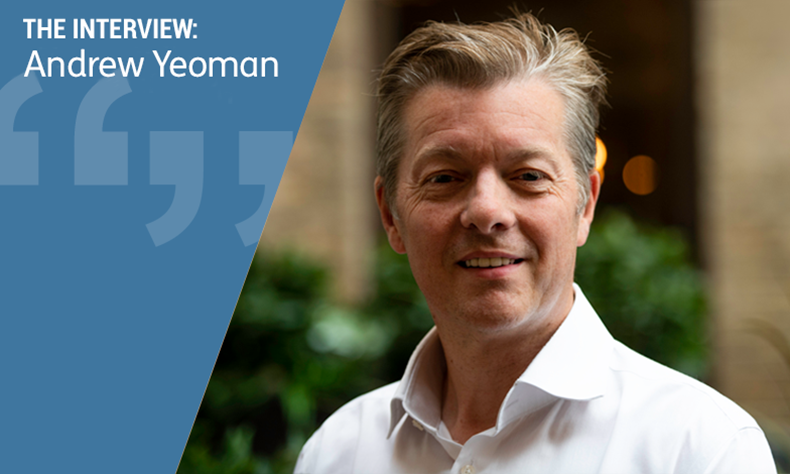 Insurtech Concirrus has gone from a standing start in 2016 to build a customer roster that includes some of the biggest names in marine insurance. Chief executive Andrew Yeoman explains how he came to shake up an entire sector.

IF ONE company has taken marine insurtech by storm, it has to be Concirrus. And as a salesman by background, chief executive Andrew Yeoman can scarcely be accused of false modesty when asked to talk about his product.

But while it’s entirely proper to discount a clearly practiced and somewhat enthusiastic sales pitch, there’s no denying the impact his outfit has made in a short space of time.

In just four years, Concirrus’s Quest Marine software has secured numerous big-name users in the hull and machinery and P&I spaces, including Chaucer, Hiscox and Skuld, along with a number of Lloyd’s syndicates that prefer not to go public.

Mr Yeoman’s plans for 2020 include rolling the package out to cover cargo, the largest single marine line. So why the widespread interest?

“We have 500 billion records in our platform, with over two trillion data points. And we have now ingested, analysed and understood everything about this industry. Everything you can possibly imagine about the marine insurance industry,” Mr Yeoman argues.

“Where it has been every 15 minutes for the last seven years, and what was the weather at that time. Which direction was it facing, what was the tidal pattern there. What was its average speed. We have everything; we’ve codified the entire industry.”

The platform will include a new predictive pricing module, which Concirrus says will enable Hiscox to analyse existing portfolios in greater detail

The age of experience is over, he contends, and mere humans can’t beat the power of algorithms. London cabbies might have memorised all the best routes, but it’s Google Maps that knows which are congested or closed at right this minute.

Insurtech, he believes, can do a similar job for insurers, and deliver the kind of underwriting nous that betters even the judgement of seasoned industry veterans.

“We are giving the underwriters superpowers they’ve never had before, to actually understand the historic behaviour of risk.”

Mr Yeoman has enjoyed an unorthodox career, and shaking up marine insurance was never the original game plan.

He grew up in High Wycombe in Buckinghamshire, the son of an engineer, whose company made the world’s first automated glass-cutting tables. His first job was working there as a storeman when he was 16.

His teenage ambition was to become a professional golfer, and he was only put off the idea when he realised that his best friend was outpacing him without putting in too much effort. But the whole experience left Mr Yeoman well aware of just how competitive he is by nature.

“Nigel didn’t even practice and he just got better and better, much quicker than I could. I thought, ‘Well, if I’m not going to win, then I’m not going to do it’. And I literally downed tools from the age of 17.”

Turning down an offer to read maths with statistics at Leeds University, he took a job with a construction company as a computer operator. After that, he began programming.

Indeed, if you go into a Safeway supermarket, you may notice the labelling on the shelf ledges that reduces goods such as Heinz baked beans to abbreviations like ‘HZBBNS’. Mr Yeoman wrote the algorithm that does that.

The logical progression was into software sales, selling accounting and knowledge management software. That saw him work in the US, eventually in a general management capacity.

For seven years from the turn of the century, he worked for Nasdaq-listed Trimble, where he was responsible for its transport technology division.

Trimble attempted to sell data gleaned from the black boxes the firm fits in heavy goods vehicles to vehicle insurers. The only trouble was that the insurers weren’t buying.

“I spent two years of my life and went back to report about it to my board. I said, ‘I think we’ve overestimated the willingness of this industry to change’. We just couldn’t get any traction.”

Mr Yeoman founded Concirrus in 2012, initially with the idea of orienting it to the then fashionable notion of the internet of things. The name, in case you are interested, is derived from the Greek prefix ‘con’, meaning with, and ‘cirrus’, a type of cloud formation.

By 2015, all Costa Express coffee vending machines and Heathrow airport’s baggage system were connected to its platform.

Following an injection of venture capital in 2016, it was decided to divest existing business, and to focus on one market specifically. Despite his earlier negative experiences attempting to sell to insurers, he chose marine insurance, in the belief that it was underserved by technology, while having lots of data available.

“I wouldn’t say I met resistance. I met absolute rejection,” he now quips. “People don’t want to change. People have been doing business, being effective in their work for the last 10, 20, 30, 40 years. And their methods of work are ingrained, they’re institutionalised.

“We studied marine for about a year and a half. And I became deeply suspicious of the marine market, because I couldn’t understand why, if there was loads of data, nobody was using it. Nobody was making any money. And nobody wanted to change. And I couldn’t couldn't understand it.

“So as a technology vendor, we came into the market and said, ‘Hey, we think we can help you change’. It took us a while to understand that what we were selling was efficiency, not effectiveness.”

Concirrus built its sales case on such quantifiable inefficiencies as acquisitions costs in the order of 40% and marine insurance’s collective combined ratios of 126% in 2017 and 118% in 2018, which created the kind of climate that generated the now infamous Decile 10 program to cull underperformers.

The aim was to demonstrate — on the basis of a customer’s own data — that Quest could improve ratios by anywhere between 10 to 25 percentage points by superior segmentation, risk selection and risk management.

“Whereas many people view what we do sometimes as a threat, what we do is probably the biggest single opportunity for the industry, because we will help people understand risk, create new policies, understand how risk crystallises. I genuinely think that will help the help the industry.”

At this point I pose the $64,000 question for a tech company. Is Concirrus actually making money?

“Absolutely, wholeheartedly not,” he admits. “We’re a venture capital-backed company. We absolutely do have significant revenues and an organisation

“We have an investment cycle which has ambitions that run into multiple years. We have enough funding to keep us going until our plan gets our business there.

“Investors [in tech companies] generally don't care about profits. They only care about the equity value of the company.”

Andy Yeoman, as he is to friends, is aged 55 and lives in Hampshire with his wife and three teenage children, one of them working and two still at school.

In terms of his management style, he tries to limit himself to being a Monday to Friday workaholic. The company culture discourages people from working weekends, although he concedes that he doesn’t live up to his own stipulations.

He took up running a few years ago, beginning with park runs before challenging colleagues to see who could achieve the fastest time over 5 km.

“My theory was that I could lose weight quicker than they could get fitter. I managed to beat the fastest person in the office by one second. Yeah, in a gargantuan effort.”

He also enjoys wine. Nearby Basingstoke is home to the warehouse of upmarket wine dealers Berry Bros & Rudd, which Mr Yeoman describes as “an adult pick and mix”.

His tastes in music are eclectic, to say the least, ranging from 1970s middle of the road duo the Carpenters to grime star Stormzy, somehow incorporating classical music as well.

In sports, he follows English premiership rugby union side Harlequins, where his friend David Ellis was until last year chief executive, and watches football and athletics on television. He is also an avid reader of business books.