The challenges faced by cruise sector executives like Carnival's Arnold Donald, currently at the cutting edge of environmental compliance, should be taken as a warning to the rest of the sector that such issues are only going to increase as scrutiny from regulators increases 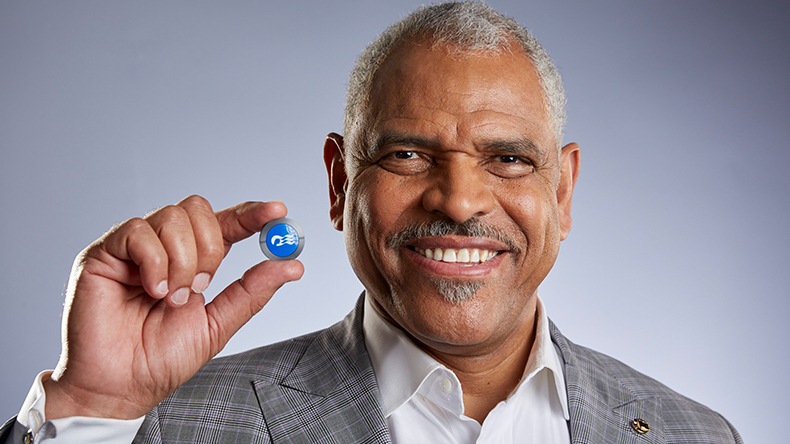 Donald: has introduced new technology like the Ocean Medallion, a smart wearable badge for cruise customers.

LACK of public perception is an issue for many of the executives in our ranking. That is not a problem currently bothering Arnold Donald or any of the other cruise industry chiefs.

Viral footage of the bloated floating hotel MSC Opera steaming into a small pleasure cruiser in Venice, sending petrified tourists fleeing from the dockside in early June, was an unfortunate image for a sector already struggling with sustainability.

The crash triggered a minor scandal in Italy and potentially ended cruising’s love affair with Venice.

However, safety, sustainability and environmental protection is by no means a local issue for the cruise operators.

The entire sector is under scrutiny and Carnival and its chief executive Mr Donald — our chosen cruise proxy for the purposes of this Top 100 list — is facing intense heat from the regulators, many of whom are vocal detractors.

The US Department of Justice has effectively required a restructure at the top of Carnival to overhaul its compliance culture.

This process has seen the company quadruple the size of its environmental compliance team and hire a chief ethics officer, Peter Anderson, who now reports directly to Mr Donald.

While the slew of green initiatives that have been emitted from Carnival HQ this year may indicate progress in this regard, the reality is that this has been forced upon them.

Some of this is historical, but the problems have come back to haunt them with a vengeance this year.

Carnival is still on probation for illegally dumping oily waste from its Princess Line ships in 2017, when it was fined $40m for environmental crimes — the largest-ever fine at that point for crimes involving deliberate vessel pollution.

However, in June this year, the company was fined a further $20m for violating the probation agreement for those offences.

Carnival’s C-suite was asked by the DOJ “to personally pledge their commitment to correcting the company’s compliance issues and corporate culture” and the creation of the chief compliance officer role was a term of the company’s settlement agreement.

If Mr Donald was hoping that would draw a line under the issue, he was wrong.

In October, the same federal judge who issued the $20m fine pushed Carnival to accelerate its promised overhaul, telling executives she expects more concrete action and fewer promises from Carnival.

Mr Donald has publicly explained that the company is doing a lot, but he argues it takes time to implement real changes at a company with 120,000 employees, more than 100 cruiseships and nine different brands.

That is not an unreasonable position to take and, to be fair to the cruise sector, much of the environmental advances for the wider shipping sector are being rapidly road-tested in cruise lines first.

Yet with regular court-imposed status hearings now set to become part of the corporate calendar for Carnival in the near term, progress will have to be visible, tangible and swift.

We included Mr Donald on this list for the first time last year, arguing that in terms of environmental technology, safety innovation and their approach to design and operational efficiency, cruiseships were leading (and influencing) the market.

Ironically for Mr Donald, that is still true, but his ranking on the list this year is more to do with his position at the vanguard of compliance tightening.

The scrutiny currently being applied to Mr Donald’s operations should not be taken as an anomaly of his status as a cruise leader, but rather as a warning of what is coming to the rest of our more anonymous list of executives and the pace of change that is now required to avoid similar pitfalls.