Container lines suffer equally from rogue shippers misdeclaring cargoes. But efforts to share information between themselves are being stymied by the fear of breaching antitrust rules

Carriers need to be alerted quickly to rogue shippers, but they fear breaching competition rules if they share information with rivals 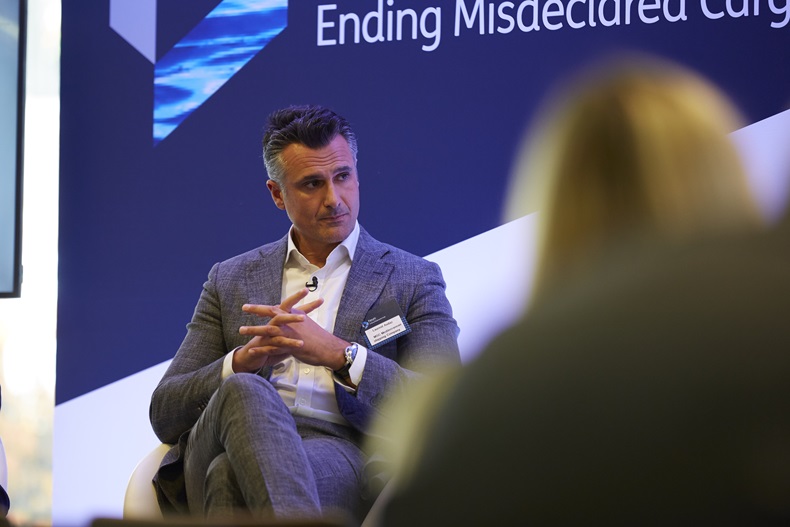 Laurent Audaz, head of insurance and legal at Mediterranean Shipping Co, said there needed to be better sharing of information about bad customers in order to fight the problem of misdeclared cargoes being loaded on to ships.

An increase in dangerously mislabelled containers had been behind a rising number of fires on containerships.

TT Club head of risk management Peregrine Storrs-Fox said that fires on ships had traditionally occurred once every two months, but that this year the figure had risen to once every 30 days.

In one sense, carriers are victims of their own success; ever more cargo is being transported in containers and the number of boxes transported rises every year.

But this makes it impossible for container lines to check that the contents of every box they load conforms with its bill of lading. Where boxes are checked, and misdeclared cargoes are found, there should be a mechanism available for alerting other carriers that the shipper in question should not be trusted.

“If I know a shipper has been misdeclaring cargo, I should be able to ring up my colleagues at Hapag-Lloyd, for example, and tell them,” Mr Audaz told the Ending Misdeclared Cargoes Forum, hosted by the TT Club.

But strict antitrust rules in Europe and the US make this impossible, he said. “If we breach these regulations, we could face fines of up 10% of the turnover of the company. No carrier is going to risk that.” He said the industry needed to be “more reactive”.

“If I have a rogue shipper on my ship, the same shipper will be on ships of Maersk, CMA CGM and Hapag-Lloyd. We should be able to send a message to a platform identifying the company so that everybody gets an alarm.

“If we move together, we can harm those that are shipping misdeclared cargo.”

The Cargo Incident Notification System, an initiative launched by carriers in 2011 to help reduce the number of incidents on board, played a role, but could only report historical data, Mr Audaz noted.

“We need a real-time solution,” he said. “We are working on initiatives but it is difficult to get momentum.”

Lloyd’s List Containers understands there have been talks among senior container line executives about finding a mechanism to overcome misdeclarations.

A new agency, which would encompass shippers, forwarders, ports, terminals, insurers, and other stakeholders, as well as container lines, is thought to be one idea under consideration.

The idea is thought to have been discussed at a meeting of the influential Box Club last year. It was raised again when the group of container line chairmen and chief executives met in Marseilles.

Nothing further, however, has emerged, and it appears that the risk of antitrust rules has so far prevented further action being taken

But collaboration remained the key to attaining the goal of safer shipping, and in the longer-term, a move to an integrated digital platform was the best solution as it documents each step of the supply chain process, Mr Audaz said.

“We can develop an effective set of rules through collaboration,” he told the forum.

But carriers needed to “get alerted quicker” if there are suspected reports of misdeclared cargoes that could potentially lead to fires on board vessels.

Some lines have already started to take steps to penalise “rogue shippers”, but there were limits to how far this could go.

“We can create rules that are very efficient but we don’t have the teeth to bite,” he said. “In some countries, businesses can be opened and closed again in a snap, and even if we can get to them it is very hard to go through the judicial processes. Most of the time it is a waste of money.”

The real problem was where shippers willingly hide the nature of their cargo, rather than genuine mistakes being made.

“Errors and incompetence are an acceptable risk that we insure against,” said Mr Audaz.