The gap between older crude tankers being scrapped and future demand uncertainty may produce a sudden spike soon. Meanwhile, on minor bulks, being built in Japan is an unmatched liquidity asset

Limited opportunities for asset plays in the past 10 years, as well as the current cautious approach to investment in the next generation of new ships, suggests that certain sectors may spike in the next two to three years 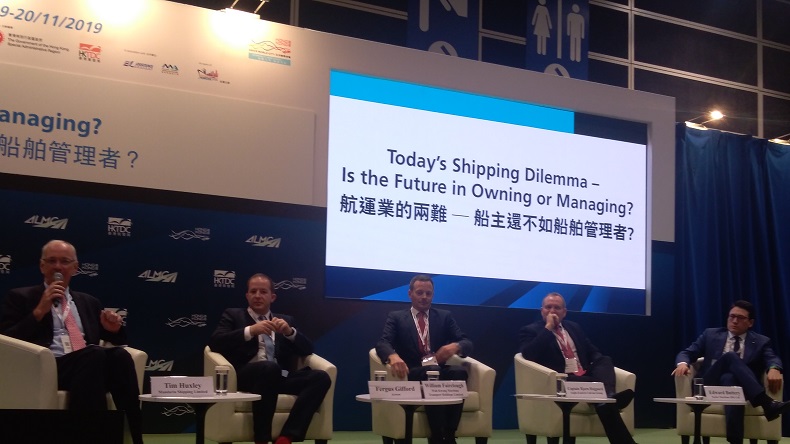 The panel at the Asian Logistics and Maritime Conference 2019 was very positive on asset plays in shipping.

TYPICALLY for a discussion on asset plays in shipping at Asia’s freewheeling capitalist centre of Hong Kong, panellists at the Asian Logistics and Maritime Conference went in big and strong, suggesting very large crude carriers and solid Japanese-built handysizes were the best bets.

Wah Kwong Maritime Transport managing director William Fairclough said that many of the previous generation of very large crude carriers built in the early 2000s would reach their 20-year special surveys, but be unlikely to pass this hurdle.

Meanwhile, in the preceding 10 years, the dire crude tanker market has led to a lack of confidence in the most suitable type of vessel to invest in with many owners simply waiting, and this could lead to new opportunities, he added.

“The cycles when they come, they tend to take you by surprise, that is the nature of the industry that we are in, and I think there are certain signals that those 10 years of bad market are really starting to have an effect on what may plant the seed for the next opportunities on asset play,” said Mr Fairclough.

While pointing out that there have been very limited opportunities on asset play during the past 10 years since around 2010, he notes that the current cautious approach to investment in the next generation of ships suggests that during the next two to three years, “there could be certain sectors where there could be a good chance where the asset play will prove it is alive and kicking”.

He suggested that for crude oil carriers there is “definitely a cliff coming”.

Mr Fairclough explained that by the early 2040s the current generation of newbuilding very large crude carriers being built in the next year or two will reach the end of their economic life, and possibly with the requirements for the transportation of oil being markedly less than currently this point may come even sooner.

“There is a very rational reluctance to invest in a many newbuildings to replace that very significant proportion of the fleet”, since there is little clarity on the future requirements. As such, there will not be a huge number of conventionally powered large tankers ordered during the next five years, he said, which would make the market vulnerable to supply shocks.

This, in turn, led panel moderator Mandarin Shipping chairman Tim Huxley to joke that “perhaps the second-hand VLCC is the great punt for the next few years”.

Minor bulks specialist Taylor Maritime’s chief executive officer Edward Buttery meanwhile said that when he started up his relatively new company, he was raising funds from scratch and it was based solely on asset plays. “Liquidity is basically all that anyone, especially in New York wants,” he said.

This explains why the company almost exclusively owns Japanese-built ships. “Japanese handys in our segment is critical for liquidity because they are so much easier to sell,” he added.

Dismissing doubts about ability to gain decent yields on these costlier investments compared with Chinese-built vessels, Mr Buttery explained that during the past 20 years, as long as the purchase price is less than $10m, if a 10-year-old Japanese-built handysize is fixed on the average time charter rate over that period an owner would return a yield of 9.5% on average.