The Asian city is keen to defend its position as a leading maritime hub by increasing efforts to attract more shipping activities. A set of tax breaks being discussed by policymakers are expected to be enacted next year

Frank Chan, secretary for transport and housing of the city’s government, tells a shipping conference that the leasing houses providing ship finance will have their profit tax rate cut down to zero 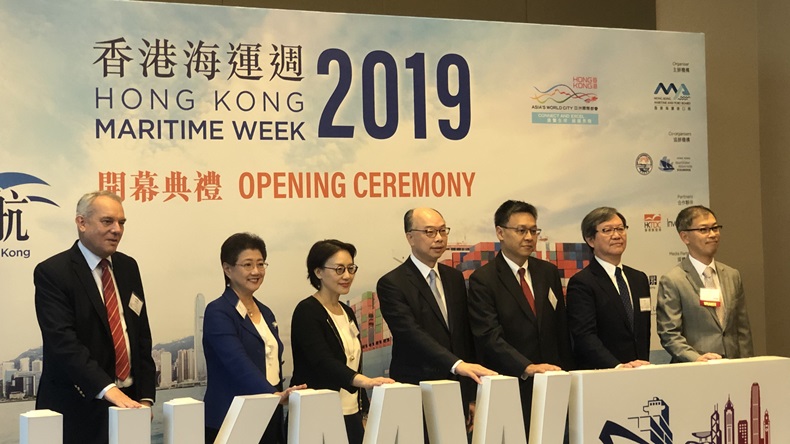 Secretary for transport and housing Frank Chan (in the middle) at the opening ceremony of the Hong Kong Maritime Week 2019.

HONG Kong is to remove income tax for ship leasing firms that are willing to locate their business to the Asian maritime hub.

The move is part of the territory’s plan to boost the local shipping sector, according to a senior government official.

“We’ve heard the industry call for further tax incentives to attract more presence on maritime commercial principles, and we are working on that,” he said.

While little detail about the tax exemption was provided, Mr Chan told Lloyd’s List on the sidelines of the conference that this new tax regime was “at law drafting stage” and expected to take effect by mid-2020.

In private conversation, local shipowners and lawyers suggested that the legislation may include entitlement of ship lessors to the tax break polies under the so-called section 23B of the Inland Revenue Ordinance, which currently just applies to shipowners.

The charter out of a Hong Kong registered ship engaged in international trade is exempt from profits tax on its charterhire income under section 23B.

The move comes as leasing houses, especially the major ones from China, are playing an increasingly important role in the global ship finance market, and in some cases, even acting as traditional shipowners via rising uptakes of operating leases.

Hong Kong, a formal British colony and now a Chinese Special Administrative Region, should use that momentum to benefit its maritime community, the city’s Financial Services Development Council noted in its Maritime Leasing Paper published in May last year.

“Many Mainland China vessel leasing companies with all or part of their fleet based or registered outside Mainland China in low tax jurisdictions are looking into housing their offshore ownership operations in respectable jurisdictions with a stable tax and legal environment, along with other considerations,” it wrote. “All these activities present a real opportunity for Hong Kong.”

Mr Chan told delegates that the tax exemption for ship lessors would be coupled with another move to halve the profit tax rate to 8.25% for qualified ship leasing management companies.

Bill Guo, executive director of ICBC Financial Leasing, one of the largest shipping lessors in China, said his company was about to set up a representative office in Hong Kong, although the process was slightly delayed by the current social unrest that has been rattling city’s economy over the past several months.

Hong Kong was an indispensable financial and shipping hub, where international capital, talent and vessels converge, he added.

“Chinese companies, including those in shipping, needs to use Hong Kong as a window to go overseas,” he told the meeting.

He told Lloyd’s List that his company was also considering a similar structure established by its aviation sector in Hong Kong earlier.

ICBC Leasing, a subsidiary of Industrial and Commercial Bank of China, the world’s largest commercial bank by asset size, set up a wholly-owned subsidiary in the city in March last year — about nine months after the government cut the income tax rates for aircraft lessors from 16.5% to 8.25%.

That said, such a move must be approved by the China Banking Regulatory Commission that oversees the country’s banking sector before it can take place, Mr Guo said.