Grahaeme Henderson has evolved his role as industry spokesman on the subjects of maritime safety and decarbonisation. He has followed up the Together in Safety initiative with another under the potential banner Together in the Environment. Dr Henderson is passionate about the role for LNG in Shell's decarbonisation journey 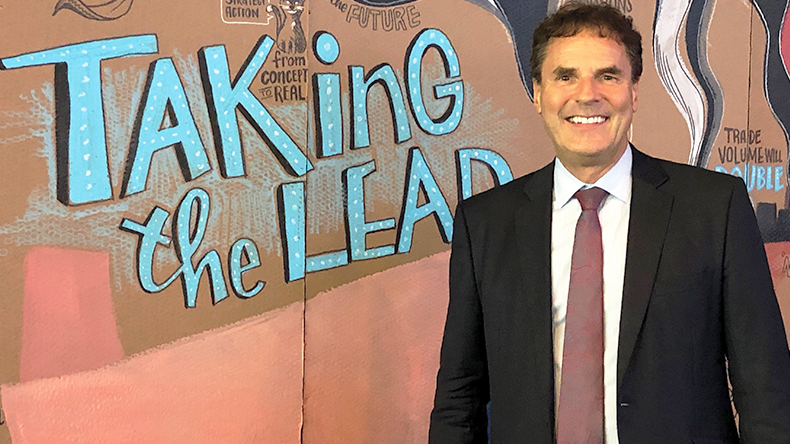 Henderson: understands the key to tackling decarbonisation is technology.

GRAHAEME Henderson is vice-president, shipping and maritime, at Shell International Trading & Shipping Co. That makes him responsible for Shell’s shipping across the upstream, downstream, projects and technology.

Among this portfolio is the world’s largest fleet of liquefied natural gas vessels — 90 owned and chartered ships — and Prelude FLNG, the largest offshore facility ever constructed.

In June this year, it was announced that the first LNG cargo had been shipped from Prelude on the gas carrier Valencia Knutsen to customers in Asia.

Meeting the growing demand for cleaner energy — and delivering that energy safely — have become the twin drivers of Dr Henderson’s role.

His recent work on Together in Safety, especially the High Impact-Low Frequency (HiLo) initiative, has made him the industry spokesman on safety.

Experience of working in partnership on that safety venture has now been utilised in another tough issue for shipping: decarbonisation.

Although decarbonisation is relatively new for much of shipping, Dr Henderson has been working on it for the past five years.

In an initial bid to reduce emissions by tackling inherent inefficiency, he led Shell in breaking down vessel operations into 105 steps and optimised each of them.

It was a determined move from an analogue to a digital way of thinking.

The result has already produced a 15% reduction in emissions, with an achievable target of 20%.

He is passionate about LNG as a key element in Shell’s decarbonisation journey. The fuel offers a reduction in CO2 of potentially more than 20% and zero SOx emissions.

LNG is currently available at 150 ports around the world, the infrastructure is in place — and the industry understands it, he says.

That cannot be said of the new fuels under development that will not be available in the quantities needed or with the necessary infrastructure.

The estimated date for the widespread use of ammonia or hydrogen is 2030; in the meantime, Shell is developing an LNG vessel than can be converted to ammonia.

The spirit of collaboration driven by the safety initiative has been replicated in Dr Henderson’s work on clean energy and, ultimately, zero-emission shipping. “We should be working together” because the final solution will involve a range of fuels, he says.

Dr Henderson believes shipping’s acknowledged fragmentation can only be tackled by “collaboration at a level the industry has never seen before”.

The work on safety brought all the major shipping associations into one room, together with the major vessel operators.

That same style of working is needed for decarbonisation — co-creating a global environmental programme.

Dr Henderson has called on maritime to collaborate with other industries — especially aviation, trucking and heavy industries, which will be competing for the new fuels — and with the wider logistics supply chain.

Echoing the work on safety, this might be flagged as Together in the Environment.

A recent example of partnership has been the digital shipping app named Pronto, a platform that embraces ports, shipping companies and terminals working to use smart digital solutions to increase levels of efficiency across maritime.

Dr Henderson understands the key to tackling decarbonisation is technology. He will work in the coming year to encourage technology groups and classification societies to collaborate more closely.

Regarding policy, he sees national governments and the IMO have essential roles to play. Dr Henderson is in discussion with IMO secretary-general Kitack Lim about a global mandatory greenhouse gas emission regulation framework. Government support is vital for further research and development.

Dr Henderson holds a first-class honours BSc degree and a PhD in mathematics of sea waves. He is also is a professional chartered engineer.

A past-president of the UK Chamber of Shipping and a past-chairman of OCIMF, he has been a member of the World Economic Forum’s Global Agenda Council on the Oceans and has chaired the UK Shipping Defence Advisory Committee.

He was a member of the UK expert panel that produced the Maritime 2050 report.

His work on bringing maritime associations together to tackle safety issues — and now environmental issues — has made him one of the leading players in the global maritime sector.

Data sharing is essential in race to cut shipping's tragedies