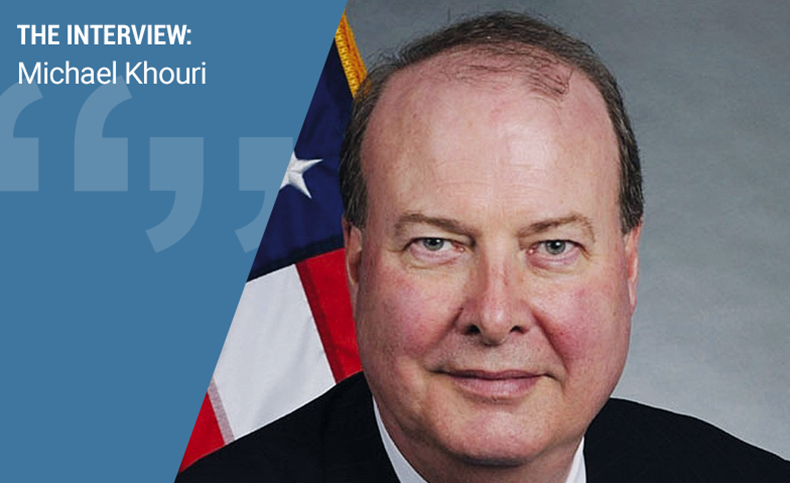 FEDERAL Maritime Commission chairman Michael Khouri finds himself in the unusual position of being a regulator committed to deregulation.

“The FMC’s mission is to ensure a competitive and reliable international ocean transportation supply system that supports the US economy and protects the public from unfair and deceptive practices,” Mr Khouri says. “In short, our job is to ensure competition and integrity in America’s ocean supply chain.”

That purpose, mandated by Congress, would at first glance appear to require the iron fist of bureaucracy rather than the invisible hand of the market, but Mr Khouri disagrees.

“I’m a conservative and I firmly believe less regulation is better,” he tells Lloyd’s List in an interview. “We have a fundamental mission to carry out and that’s what we’ll do, but when given reasonable choices I’m going to fall off the log on the side of reducing burden to businesses. We should get out of the way and let businesses do what they’re designed to do as long as they’re playing fair.”

Ensuring that fair play is tricky, however, particularly given the huge consolidation of the container shipping sector that has occurred over the past decade.

“The ocean transportation industry has changed over the last few years,” Mr Khouri says. “The number of major global container shipping companies decreased from 21 to 12. Both worldwide containerised trade volumes and containership capacity continue to grow, with over 5,300 vessels deployed globally providing over 22 million teu of carrying capacity. The size of ships serving the US market has grown dramatically in the last decade and, at the end of 2018, the three global alliances controlled 86% of vessel capacity in the two largest US trade lanes, the transpacific and the transatlantic.”

The FMC has responded to these structural developments with new alliance agreement negotiation practice that narrows agreement authority, restricts operational scope, and provides for enhanced monitoring programs, he adds.

“For all agreements, our staff maintains a careful watch on industry trends, being alert for indications of anticompetitive behaviour.”

Nevertheless, he believes the market is working as it should.

“Am I comfortable with how the market, as we sit here today, is working? The answer is ‘yes’. And I base that answer starting with my chief economist and her team, and the measures they are applying to all the data they see.”

The FMC gathers huge amounts of confidential data on ocean carriers from the service agreements they are required to file with the commission.

That data indicates that the lines are beginning to stabilise their operations, Mr Khouri says

“Are the carriers beginning to show some level of sustainable life? Are the generating some level of profitability? We’re not where we were eight or nine years ago when they were all in the red. That was not sustainable. We need a sustainable industry.”

That became hugely apparent following the collapse of Hanjin Shipping, which left shippers struggling to find cargoes, either on Hanjin ships or on the ships of its alliance partners.

“If the banks would have fully appreciated that pulling continuing support in such a sudden way would have such an impact, I don’t think they would have made that decision,” Mr Khouri says.

“That was complicated by all the slot-share agreements Hanjin had in place. Some 90% of carriers had at least one Hanjin box on board.”

But while the FMC has no statutory authority to do anything about that, it did look at the after effects.

“Things got sorted out,” Mr Khouri says. “SM Line came in and bought that equipment out of bankruptcy. That’s business. Sometimes some companies go out of business.”

Carriers often argue that competition rules are too stringent and that if there were any collusion they would surely be doing better financially.

When put to Mr Khouri, he has a straightforward response to the reason lines are not making money: “Felony stupidity.”

But he adds that one of the commission’s stated missions is to implement a rigorous deregulation programme.

“We’ve moved a number of regulations from our books, and I’m proud to have done that,” Mr Khouri says.

This has included removing the requirement for freight forwarders to file service contracts.

“They didn’t move a box by themselves, and we already had the carriers’ service contracts, so we asked ourselves why it was necessary to duplicate.”

Moreover, he argues that under the US regulatory system, carriers are protected from further investigation under antitrust laws.

“From a carrier perspective, when you file your agreement and it passes muster, and you follow the rules, then the other antitrust laws in the US do not apply,” he says. “The Department of Justice cannot come in and investigate the agreement between Maersk and Mediterranean Shipping Co by law.”

He points to the ro-ro antitrust case that saw a number of major car carrier operators having multi-million dollar fines imposed.

“The four big players split the market between them,” he says. “They made an agreement without filing it with the commission. They also violated the Shipping Act because they were operating with an agreement that they had not filed.”

Because of that, they did not enjoy the protections of the Act so the DoJ could come in and charge the carriers.

“It’s hard to see how that agreement would have been accepted, but if they had, DoJ would not have been able to come in, nor could private third parties.”

The regulatory framework actually assists carriers by giving them some certainty that they may not otherwise have.

“Under our system lines have the certainty for their long-term multi-million dollar investments,” Mr Khouri says. “It gives them a level of assurance in an industry that requires very large investments with very long timelines.”

Under the European system, in which carriers have to self-assess whether they are within the limits of competition law, they don’t have the same level of security, he adds.

“The rationale is that they will be careful and conservative when they self-assess.”

The system has not always worked perfectly for the lines, however. In early 2017, the Box Club, a group of the chairmen, presidents and chief executives of the world’s major carriers, was meeting in the US when the DoJ served subpoenas on the lines during a raid.

Mr Khouri keeps a diplomatic silence over the DoJ investigation, preferring not to discuss another government agency.

For carriers, while the investigation was disruptive, they were effectively exonerated when the DoJ took the rare step of publicly ending it. While not every investigation ends up with an indictment, most are just shelved, but in this case the DoJ did inform all parties that the investigation had concluded, without making a comment as to why. For observers from the outside, the logical conclusion was that nothing had been found.

It was less than 18 months ago that the outlook for the FMC looked uncertain after Commissioner Daniel Maffei resigned after the White House declined to renominate him, leaving just Mr Khouri, then as acting chairman, and Commissioner Rebecca Dye.

Since then, however, Mr Khouri’s chairmanship has been made permanent, Mr Maffei has been reappointed, and Commissioner Louis Sola has been appointed. The fifth and final appointment to the commission, Carl Bentzel, has been nominated but is still awaiting Congressional approval.

Despite fears that the commission would have been unable to do its work with just two members, Mr Khouri is confident that it is back on the right track.

“We need three for a majority, and if I can convince two of my colleagues to do something, then we have effected a change in a very large industry,” he says.

“We had a period where we just had Commissioner Dye and myself as chairman, where all I had to do was convince one person, so that required even a greater level of humility.”

“What we act on fundamentally is the process where the professional staff, the lawyers and economists, are the ones that do the investigation and research and prepare the papers, Mr Khouri says.

The commissioners are then briefed and vote on the outcome. The value add that the commissioner bring to that is being able to raise questions, he says.