Misdeclared dangerous goods are thought to be the root cause behind a string of major containership fires. But despite concerted efforts to stamp out rogue shippers, incidents continue to blight the industry and put seafarers and ships at risk


This year the spate of fires has seen no let-up, with blazes on board Hapag-Lloyd’s Yantian Express, the APL Vancouver, and Grimaldi’s con-ro Grande America 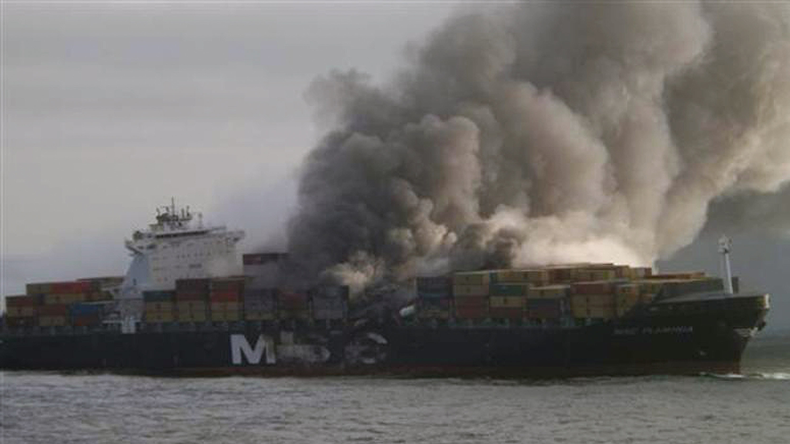 THE increasing regularity of containership fires has the industry concerned, as the list of incidents grows. Often, they are avoidable. And too often it is the non-declaration or misdeclaration of dangerous goods that is found to be the root cause.

Indeed, 18 months on from the fatal Maersk Honam blaze, which cost the lives of five seafarers, and seven years after MSC Flaminia, the container shipping sector’s safety record still falls well short of what might be expected.

Transport and logistics insurer the TT Club says that historically a major containership fires at sea occurs, on average, every two months. Worryingly ICHCA states that there are potentially up to 1.3m containers shipped annually holding unstable dangerous goods. The 2015 fire and explosion at Tianjin that killed 44 people demonstrates the possible impact and scale of such misdeclarations.

In 2019, the spate of fires has seen no let-up. These include fires on board Hapag-Lloyd’s Yantian Express, the APL Vancouver, and Grimaldi’s con-ro Grande America. Fortunately, these events reported no loss of life. But the monthly average heightens concerns.

In each of these events there was substantial cargo losses and damages, while the fire that broke out on the Grande America in March, which saw it flounder in the Bay of Biscay, followed rapidly with its sinking. All these boxships fires have significant insurance and salvage implications.

Transport and logistics insurer the TT Club says that historically a major containership fire at sea occurs, on average, every two months

But off the back of high-profile incidents, the issue of boxship fires and the risk parameters have understandably been thrust into the spotlight. Fortunately, the many in the industry are now paying attention. Prevention and detection of cargo mis-declaration is now high on the agenda across the industry.

The various stakeholders both at sea and ashore are galvanised to identify ways to tackle the problem. Recent headlines include rogue shippers now facing financial penalties for falling foul of the law. But fires are still occurring and cargo that poses risk to seafarers and the ships they serve is still slipping through the gaps. With yet more ultra large containerships on order and talk of 25,000 teu units in the near future, the risk factor will only grow.

On October 15, Lloyd’s Loading List will be hosting a timely webinar in conjunction with the TT Club to address this increasingly pressing matter, as we get to grips with how to clamp down on rogue shipments. What can be done to ensure shippers are aware of the dangers? How can security measures and cargo transparency be heightened? What options are there for stowage plans to be adjusted to minimise the impact of fires? Is there more that class societies, regulators and enforcement agencies can do in tackling the issue?

Looking for answers and heading up the panel will be TT Club risk management director Peregrine Storrs-Fox, a name that has become synonymous with hazardous cargo safety and awareness. He has spoken at countless industry conferences and seminars across the globe in recent years, raising its profile while finding time to pen must-read white papers and articles covering the issue.

He will be joined by Uffe Ernst-Frederiksen, head of cargo management at Maersk Line. In addition to his role at the world’s largest ocean carrier, Mr Ernst-Frederiksen is also serving a second term as chairman of the Cargo Incident Notification System Network, or CINS. The organisation was set up with the objective of highlighting the risks posed by certain cargoes and packing failures to improve safety in liner shipping. Understandably, boxship fires form a crucial part of the work undertaken by the initiative, whose membership includes nearly all the major container shipping lines.

Completing the stellar line up is Dr Penelope Cooke, a consultant scientist at marine consultancy Brookes Bell. Among her many fields of expertise, she advises on the scientific and technical aspects of dangerous goods declarations.

The webinar will be moderated by Lloyd’s List’s award-winning journalist and editor of the bi-monthly Intelligence magazine, Linton Nightingale.