Shipping’s biggest European and US banks recently welcomed the Poseidon Principles. One of the green financing co-founders, Citi shipping and logistics chairman Michael Parker believes the Chinese government will push the country’s lenders to join. But at the moment, shipowners have more immediate issues with which to contend

During a panel discussion at London International Shipping Week, Mr Parker reveals he and Société Générale’s Paul Taylor recently travelled to China to speak to Chinese lessors about the pioneering financing principles that incorporate climate policy 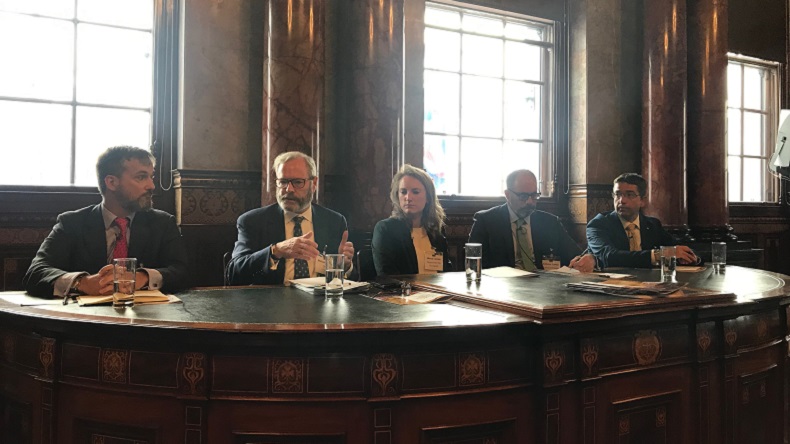 The panel at a Lloyd’s Register event during London International Shipping Week.

SHIPPING’S most well-known banker is confident Chinese lenders and export credit rating agencies around the world will endorse pioneering financing principles that incorporate climate policy. But owners are still waiting for incentives to invest in sustainable shipping.

A few months ago, European and US banks, with a collective shipping portfolio of more than $100bn, agreed to consider climate implications and parameters in their lending policies to shipping companies.

Conspicuously absent were Chinese lenders, including the leasing companies that have become increasingly popular among shipowners during the past few years.

Citi logistics and shipping chairman Michael Parker revealed during a panel discussion at London International Shipping Week that he and Société Générale’s Paul Taylor recently travelled to China to speak with Chinese lessors about the Poseidon Principles.

“We believe the Chinese government will encourage all of its relevant institutions to sign the Poseidon Principles,” he said, noting that China has stepped up on the global environmental stage since the US pulled out of the Paris Agreement.

He admitted that it will take time as each institution has its own process.

But Mr Parker said it will be very important for export credit agencies to jump on board the movement as well, as they will play a significant role in financing newbuilds.

With the International Maritime Organization not taking any new emissions-reducing measures since striking its landmark agreement last year, and potentially not taking any at all until 2023, owners are left in an awkward position of pledging support for sustainable shipping but fundamentally lacking a push to spur greater investment.

Ardmore chief executive Anthony Gurnee said that while he welcomes the Poseidon Principles most of the discussion on decarbonisation is still very aspirational and abstract, that have to graduate from political and regulatory lines to practical and operational ones.

“There need to be more concrete incentives for shipowners to do the right thing. That is what is going to move the industry forward,” he said.

The head of the New York-listed product and chemical tanker owner recognised that as an incentive to invest elsewhere, ships may ultimately have to pay a premium to burn carbon fuels, a policy that other companies have called for to curb emissions in the longer term.

“We are committed to playing as a progressive role we can within the confines of reality. We have gone three years without a profit, our ships are going slower,” he said.

In stark opposition to a host of shipowners that have spoken in favour of slow steaming, Mr Parker rejected the measure, warning that it will not solve the emissions problem and would lead to more tonnage hitting the water.

“I do not think the banking sector is going to support that situation,” he said.

“We are not trying to be green extremists, I promise. We support the global regulator,” he said.

The HKC was adopted by the IMO in 2009 but still lacks support from enough shipowners and ship recycling nations to come into effect.

Global regulation not suitable for ports