Trade is a two-way street, and many European ports and shipping concerns will lose out from no-deal Brexit. The trouble for Brexiteers is that the UK economy stands to lose out even more, experts say 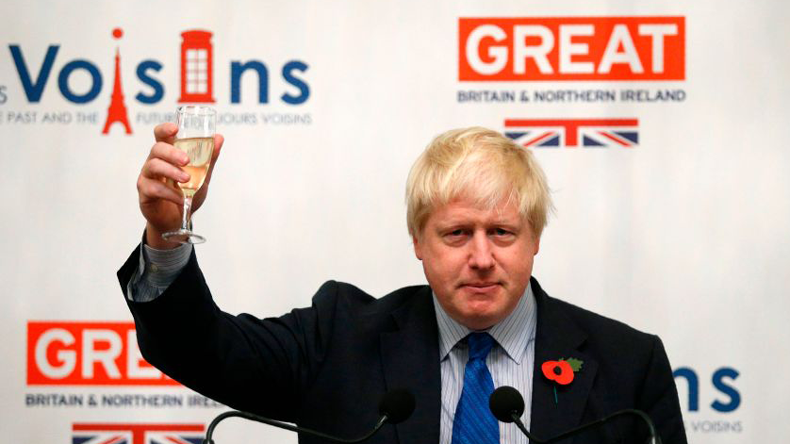 Source: Geoffroy Van Der Hasselt/AFP/Getty Images In Boris Johnson's view, the need to export millions of bottles of sparkling white wine into the UK each year gives the European Union a massive incentive to offer Britain favourable terms for withdrawal.

CALL it the prosecco politics; as far as Boris Johnson is concerned, the need to export millions of bottles of sparkling white wine into the UK each year gives the European Union a massive incentive to offer Britain favourable terms for withdrawal.

The other commodity often adduced here is German cars. The UK is the top export market for German motor manufacturers, and the return of tariffs will surely cost production line jobs in Bavaria.

It therefore follows, the prime minister believes, that the recalcitrant bureaucrats of Brussels are only bluffing when they appear reticent to strike a deal that gives him everything he wants.

Sadly, things have yet to pan out that way, although Mr Johnson has repeatedly expressed confidence that the two sides can reach agreement prior to October 31. If they do not, Brexit will happen anyway, on a no-deal basis.

The snappy response is, yes, no-deal Brexit will see the EU lose access to one export market, but Britain will lose access to 27. Any damage will be entirely disproportionate, and to Britain’s considerable disadvantage.

Nevertheless, trade is a two-way street, so perhaps there is a rational kernel to what Mr Johnson is saying.

DFDS has admitted as much, with the Danish ferry operator yesterday issuing a profits warning sparked by its significant exposure to trade with the UK.

Shares fell sharply on Tuesday morning, after the company downgraded forecast growth from the previously advised 10%-12% to somewhere between 6%-8% instead.

“Rising uncertainty about Brexit is contributing to a considerable slowdown in UK trade as manufacturers and importers/exporters are adopting a wait-and-see approach to gain more visibility,” it added.

In April and May, the imports to the UK handled by DFDS declined by 8%, outstripping the 4% fall in British exports.

Stockpiling may boost imports next month and the month after, as the Brexit date of October 31 looms, but volumes are expected to fall again in November and December.

The Brexit-related silver lining here is that the loss of business has been compensated by payments from the UK government as a result of the abortive Brexit back-up ferry contracts fiasco.

In addition, Rotterdam — Europe’s largest port — handles 40m tonnes of cargo to or from Britain every year, and has admitted that it will take a hit after Britain quits the EU.

“The first days after Brexit will for sure bring unrest and insecurity,” chief executive Allard Castelein told journalists earlier this year. “We have done everything to be as well prepared as possible, but there will always be problems.”

The nightmare scenario is truckers turning up from all over the Continent without the correct paperwork, thus guaranteeing serious congestion. There are contingency plans to convert adjoining farmland into a lorry park to deal with such a situation.

Everything is relative, however. Annual throughput at Rotterdam was 469m tonnes in 2018, so any dent from decline in trade with the UK will be easily managed at worst, and probably hardly even noticeable.

Mike Phillips, head of marine and international trade at law firm Stephenson Harwood, commented: “There is no suggestion, among any commentators, that a no-deal Brexit will result in a blockade, or anything near it. So it is not unreasonable to expect trade to continue between the UK and the EU, and to continue in substantial volumes.”

With the EU and the UK broadly aligned on regulatory matters, and with neither side announcing major plans for immediate and substantial changes to shipping policy, his expectation is for a “business as usual” environment for shipping services across the Channel.

However, the economic outlook is less clear. In particular, the introduction of tariffs on certain classes of goods will almost certainly impact volumes, up or down depending on who is selling and who is buying.

“These uncertainties create nervousness among shortsea and port operators. The only remedy for that is to remove the uncertainty by implementing Brexit one way or another, deal or no deal.

“Then businesses can get on with the work of updating their strategies, and implementing that change without further delay.”

“Brexit will be bad news for certain companies, but not enough to sway the balance or to change the negotiating stance of the big players.”

No-deal Brexit will complicate the legal basis on which trade can take place. The prospect here is for time-limited arrangements to be agreed to prevent everything falling off a cliff as the two sides struggle to come up with something more permanent.

Finally, he observed, the law of unintended consequences is bound to kick in at some point. It’s tempting to believe that a shipping company engaged entirely in, say, Mediterranean cabotage needn’t bother taking much notice of what is happening on the Channel.

Much in the manner of the butterfly in the Amazon that flaps its wing and causes a storm in the US, as made famous by chaos theory, nobody can know in advance the ultimate consequences of post-Brexit disruption.

“You have to look at integrated supply chains. Cabotage in the Mediterranean in relation to what products? They won’t be intended consequences, but Brexit could affect all kinds of things.

“Brexit was marketed as an easy process to go through, and we’ve been disabused of that notion, if we ever believed it.”