Shipping passing through the Strait of Hormuz is on high alert after a British warship confronted Iranian vessels blocking a tanker. Iran has made threats against UK ships following the detention last week of the Grace 1 off Gibraltar, where police have arrested the master 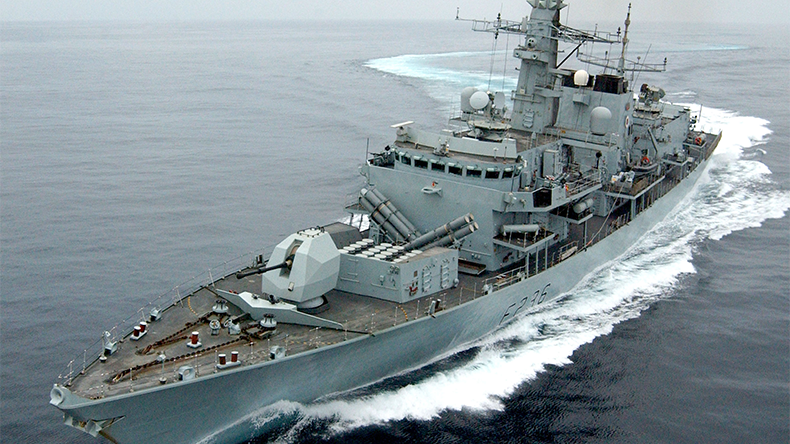 Source: Ministry of Defence HMS Montrose, a Type 23 frigate, has been involved in an incident in the Middle East involving oil tanker British Heritage.

BRITISH ships passing through the Strait of Hormuz are on high alert as Iran continues to threaten retaliation over the detention of one of its tankers off Gibraltar a week ago.

A British warship prevented what the UK government said was an attempt by Iranian vessels to block the passage of a UK oil tanker through the Straits on Wednesday.

The incident came after days of threats by Iranian official against UK ships in the region in retaliation of the seizure by Royal Marines of the Iranian-flagged tanker Grace 1 off Gibraltar on July 4.

Iran has repeatedly threatened to block the Strait of Hormuz if the major oil exporting nation that is being pressured by US sanctions is prevented from using it.

The US has raised the prospect of an international maritime security operation across the Gulf, but has released little detail.

The seizure of the Grace 1, which remains in detention under a court order until July 19, has been denounced by Iran as an act of piracy.

The captain and chief officer of the Grace 1, which is suspected of breaching European Union sanctions by carrying a shipment of Iranian crude oil to Syria, were formally arrested by Gibraltarian authorities hours after the standoff in the Straits.

The British government had already raised the threat alert for shipping to its highest before the incident involving HMS Montrose.

“Contrary to international law, three Iranian vessels attempted to impede the passage of a commercial vessel, British Heritage, through the Strait of Hormuz,” the MoD said. “We are concerned by this action and continue to urge the Iranian authorities to de-escalate the situation in the region.”

Reports said several Iranian boats approached the suezmax oil tanker and asked it to stop in nearby Iranian waters.

The British Heritage was at the northern entrance of the strait when it was approached, Reuters reported citing US officials.

“HMS Montrose, which was also there, pointed its guns at the boats and warned them over radio, at which point they dispersed,” one of the officials said on condition of anonymity. “It was harassment and an attempt to interfere with the passage,” said another official.

The navy of Iran’s Revolutionary Guards denied trying to stop the British Heritage, saying in a statement its patrol boats were carrying out normal duties, according to the semi-official Fars news agency.

“Apparently the British tanker has passed,’’ Iran’s foreign minister Javad Zarif was cited by Fars as saying. “What [the British] have said themselves and the claims that have been made are for creating tension and these claims have no value.”

According to Lloyd’s List Intelligence data, the 2017-built, Isle of Man-flagged British Heritage had previously called at Iraq’s Al Basra anchorage and was transiting the Strait of Hormuz eastbound on July 10.

It reportedly did not load at Al Basra Oil Terminal as planned because it meant sailing too close to Iranian waters and instead took refuge off Saudi waters. The vessel is now at anchorage off Fujairah. 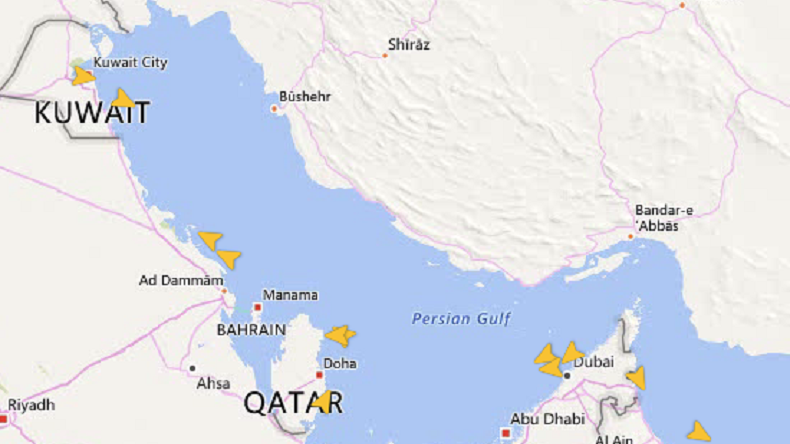 Eight ships laden with crude, refined products and other bulk cargoes are currently in a convoy formation preparing to enter the Strait of Hormuz to sail out of the Middle East Gulf according to Lloyd’s List Intelligence data.

The vessels include three very large crude carriers and one suezmax.

Their close proximity to each other at such a crucial point in the strategic energy waterway suggests that they are being supported by naval vessels as they near Iranian waters, where security and safety risks are seen at their highest level in at least 16 years.

Iran’s defence minister earlier this week called the seizure of its tanker a “threatening act” while President Hassan Rouhani warned Britain of consequences over the action.

BIMCO has thrown its support behind a US plan to form a coalition of allies to safeguard strategic waters off Iran and Yemen.

Chairman of the Joint Chiefs of Staff Marine General Joseph Dunford emphasised free passage in the strategically important region, which is a key route for the transport of oil from the Middle East.

“We’re engaging now with a number of countries to see if we can put together a coalition that would ensure freedom of navigation both in the Strait of Hormuz and the Bab al-Mandab,” he said on July 9.