The legality of the Grace 1 capture may be open to question, depending on precisely what the VLCC was carrying and the identity of the consignee, and a charterparty bust-up is almost certain, say shipping lawyers

‘I have seen speculation that this was a fuel oil cargo, rather than crude. If that is right and if it was not in fact consigned to a banned individual or entity, then the legality of the seizure may be open to debate’ — James Turner QC 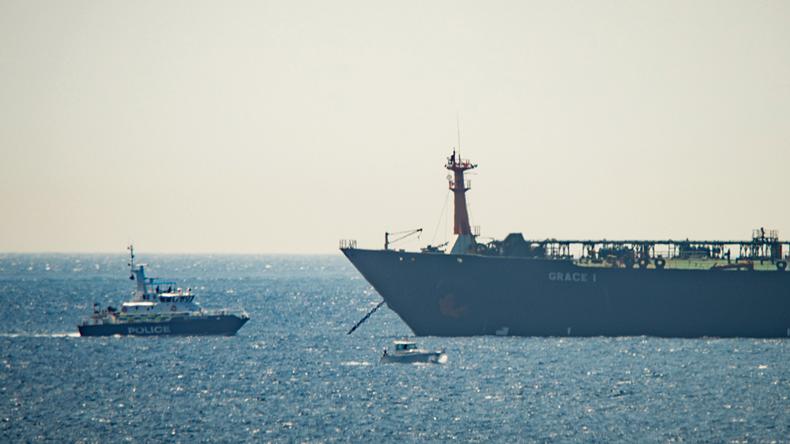 Source: © 2019 Marcos Moreno/AP Crucially, the detention of Grace 1 was performed under European Union restrictive measures placed on Syria, not Iran.

THE legality of the capture of Grace 1 depends on precisely what the vessel was carrying and the identity of the consignee, and a charterparty dispute is almost certain, according to leading shipping lawyers.

The very large crude carrier was seized by British naval forces off Gibraltar on July 4 after loading a 2m-barrel cargo in Iran, said to be intended for Syria, in mid-April.

Iran has declared the move illegal. Gibraltar has 72 hours from the arrest to make applications to the Supreme Court to continue its detention.

Michael Volikas and Keith Rowbory of Ince old Lloyd’s List that while the action was undertaken by the Royal Marines, it was ordered not by the UK government but by the Port Authority of Gibraltar in conjunction with the Royal Gibraltar Police.

Gibraltar has been granted an application to extend the detention of the Grace 1 tanker for another 14 days. An Iranian official has said a British vessel should be seized in retaliation.

As a British overseas territory, Gibraltar is largely self-governing, but matters of defence, security and foreign policy remain within the ultimate control of the British government. Thus the government of Gibraltar is entitled to request UK assistance.

But crucially, the detention itself was performed under European Union restrictive measures placed on Syria, not Iran.

James Turner QC, a prominent shipping barrister, said that while the import into the EU of Syrian oil has been prohibited since 2012 by Council Regulation 36/2012, the export of oil to Syria is not banned per se, despite widespread media commentary to that effect.

However, the same regulation bans the provision of  “economic resources” to named individuals and entities listed in Annex II, and that term would certainly include an oil cargo.

The 2012 Regulation applies throughout the European Union, including on “any ship under the jurisdiction of a member state”.

Mr Turner said: “If — as appears to be the case — the ship was in Gibraltar waters when it was seized by the local authorities, assisted by a detachment of Royal Marines, then this would appear to be a conventional enforcement action, permissible under EU law.

“That said, I have also seen speculation that this was a fuel oil cargo, rather than crude. If that is right and if it was not in fact consigned to a banned individual or entity, then the legality of the seizure may be open to debate.”

While it remains unclear which form was used, all standard contracts contain an off-hire clause, which spells out the circumstances in which the payment of hire is suspended.

Typically, the wording involved is purposely broad, along the lines of Clause 15 NYPE’s specification “or any other cause preventing the full working of the vessel”, or the even more sweeping “any other cause whatsoever”.

Meanwhile capture by pirates was held in Saldanha [2011] 1 Lloyd’s Rep. 187 to be a “totally extraneous” matter, so hire continued to be payable under the narrower version of Clause 15 NYPE.

“The question of course is: on what side of the line lies detention by the Royal Marines for alleged contravention of sanctions?” said Mr Watthey.

The charterparty is also likely to have a force majeure clause, and there may be arguments that the charterparty was tainted by illegality. Either party may also want to terminate early on the basis that the other side is in breach of charter. These are not straightforward points of law to argue in any case.

Additionally, the BIMCO sanctions clause for time charterparties allows owners to refuse voyage orders that could expose them, their managers, the vessel or its insurers to sanctions.

Charterers are then required to give new orders within 48 hours, failing which owners can discharge the cargo at charterers’ expense.

“This might have no relevance at to the Grace 1 but its detention is nevertheless a reminder to all ops departments to make sure that this clause is incorporated and that it is also contained in all sub-charters,” Mr Watthey concluded.

Mr Volikas and Mr Rowbory added that EU sanctions on the import of oil from Iran were lifted in January 2014 by the Joint Comprehensive Plan of Action, the deal that committed Tehran to restrict its nuclear ambitions. However, the US pulled out of the JCPOA last year.

“There is now a risk that these restrictive measures will be re-implemented following Iran’s notice on July 1 that it has exceeded the agreed limit to its enriched uranium stock,” they said.