The decision by a bunch of bankers to roll out a virtue-signalling initiative to bring the climate change agenda into credit decisions does not bear up to detailed scrutiny. These lenders should be restricted to an examination of the credit rating of the company soliciting finance, and ensuring that there is a reasonable chance of the terms being fulfilled and the money paid back on time 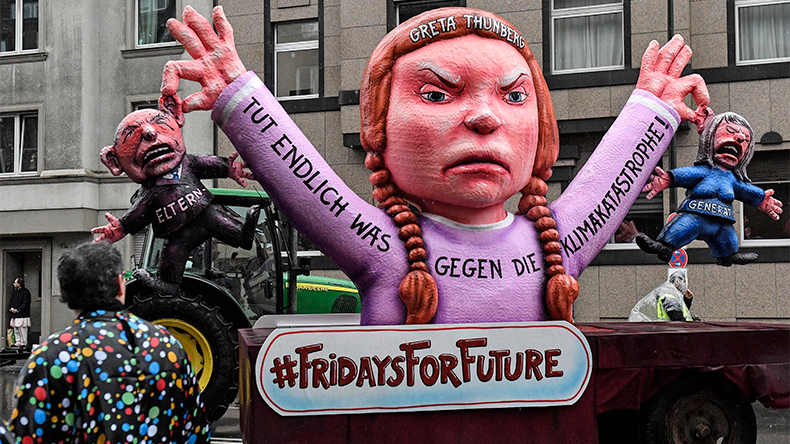 Source: © 2019 Martin Meissner/AP Photo Activist Greta Thunberg epitomises the global outbreak of virtue-signalling that has led to the tie-up of the climate change agenda to bank-lending decisions. Business figures involved may become more mute if they face discrimination law suits.

THERE is an awful lot of virtue being signalled at the moment.

Whether it is candidates vying to be the next UK prime minister boasting of their audiences with Greta Thunberg, the Swedish child environmental prodigy, or “retiring” Theresa May committing this country to a legal requirement for zero carbon emissions by 2050, it’s enough to make you want to flash up the wood-burning stove.

In the hysterical climate of 2019, vegans are virtuous while red meat eaters menace the planet and anyone wrapping their groceries in plastic (which has many important uses) is beyond the pale.

And we mustn’t forget Greenpeace, who were virtue signalling when semaphore was in daily maritime use, causing hazard and nuisance to people trying to conduct delicate rig moving operations in the north North Sea.

It seems, at least to those of us who might consider supergluing oneself to an oil company HQ a somewhat senseless act, that the world, this summer, is going a little crazy.

What really sticks in the craw, however, is this gaggle of Scandinavian banks that suggest that they will only lend finance to shipping companies which have proven environmental credentials.

They have form in this, if you bear in mind that they have swallowed, hook, line and sinker, the ship-recycling dictat eructed by the European Union, themselves gulled by a bunch of activists, who want to ban beaching and hang the consequences.

Don’t get me wrong. If a ship operator wishes to operate in the most sustainable fashion, and is willing to invest to buy the greenest ship and operate it in the way that will least harm the environment, then we should offer our congratulations for his decision.

If the law of the land and technical regulations decree that he should do the same, that is another matter. And if the customers of that shipping line favour its ships over others, because of their advanced environmental credentials, that is fine too, and justification, one hopes, for the line’s investment.

But why should a service sector to the shipping industry attempt to restrict its services to those who behave in the way it decrees?

Perhaps its shareholders have impeccable green CVs and wish their company to operate in a similar fashion encouraging those doing the lending to comply. But what are their qualifications? And on what technical basis are they to advance, or restrict their credit?

Let’s face it, there is a minefield of technical controversy out there in the real world of ship operations.

Responsible ship operators are showing their willingness to behave responsibly and are anxious to speed the reduction in emissions from their ships and machinery.

But there is no agreement on the best way to do this and two owners of utmost and equal good faith may have completely different ideas on how to achieve their environmental aims.

Will you scrub, or buy low-sulphur oil? Will you slow down, or use LNG? Might you invest in a hybrid power plant, or wind assistance? And how is some banker going to ascertain which of you is the greenest and should qualify for a loan? Are there marine engineering and naval architectural skills available behind the bank counter to make these decisions and help to discriminate between one technology which is acceptable and another which is not?

Maybe it will become a rich source of revenue for consultants, although they better be wary of ending up in discrimination suits, should those deemed unfit for finance get sufficiently angry to sue.

The world of ship finance, when it gets into these waters, is leaving its comfort zone, which surely should be restricted to an examination of the credit rating of the company soliciting finance, and ensuring that there is a reasonable chance of the terms being fulfilled and the money paid back on time.

I suppose that the banks going down this road are doing so in the conviction that it is “ethical” to be seen to be green.

You might suggest that banks in recent years have rather destroyed their reputation for the best business behaviour and are anxious to get back into the public’s good books, after their  monumental “downgrading” in general esteem, a decade or so ago.

So, by all means encourage those clever engineers who are building more sustainable machinery, devising brilliant operational systems that will play a genuine part in saving the endangered planet along with those researching new fuels and transport breakthroughs.

But if we get every blooming service provider only dealing with those it judges sufficiently green, that is virtue signalling of a very high order.

We might describe it as a touch of the Thunbergs and hope that it will go away.

Finally, we maybe ought to throw a few brickbats at the South African authorities for banning seafarers from fishing over the sides of their ships in port or as they wait in a roadstead.

The law is supposed to prevent depredation of the nation’s fish stocks, but the poor old seafarer will be caught up, as it were, in the net, as if the few fish that might be hauled up on a hand-line, will make the slightest difference.