Is Qatar biting off more than its LNG sector can chew?

Qatar Petroleum reportedly issued a tender for 40 firm newbuild liquefied natural gas carrier orders plus options for 40 more. Analysts are split over how far its national oil company can muscle in LNG shipping content for cargo sales from the North Field Expansion and Golden Pass projects underpinning the shipbuilding tender

One analyst estimates Qatar may need 75 newbuild LNGCs, almost matching up to 80 vessels its national oil company sought, but deliveries have to be staggered out to the late 2030s, beyond the time frame communicated in a Qatar Petroleum press release 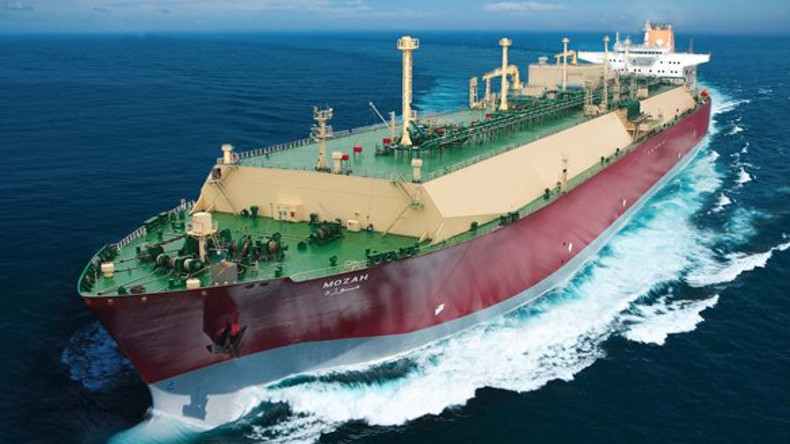 Qatar Petroleum does not seem to be after more Q-Maxes (as pictured here) for shipping LNG cargoes from the North Field Expansion and the US Golden Pass projects.

QATAR is putting up a good fight to retain its crown as the world’s reining top liquefied natural gas exporter, having organised the largest single LNG shipbuilding tender yet seen to support a major expansion of its LNG exports.

But not everyone is convinced the full order will materialise according to plan.

National oil company Qatar Petroleum last week unveiled a newbuilding plan through to the next decade for over 100 LNG tankers after calling bids for the North Field Expansion project back home and sanctioning its 70%-owned Golden Pass LNG project in the US.

Embattled yard groups in the Far East now banking on an extension of the LNG shipbuilding bonanza from last year would welcome this tender with open arms. But as some analysts have argued, it’s too early to celebrate as Qatar Petroleum may not ultimately stick to the fleet building plan.

The issued tender reportedly calls for the construction of up to 80 LNG carriers, split evenly between firm and optional units. These vessels are to be delivered from 2023 in batches of 10 annually.

A second estimate from energy and commodities research agency Wood Mackenzie suggested that Qatar Petroleum may require 75 LNGCs for shipments from the two mega export projects and to replace vessels due to be retired on its LNG fleet.

Asia Gas and LNG director Nicholas Browne said that this estimate included 30 LNG tankers for delivering cargoes from the project in Qatar to mixed destinations in South Asia, Southeast Asia and Northeast Asia plus another 15 LNG tankers if Golden Pass LNG shipments head to Europe.

But Mr Browne also said the likelihood was that deliveries of these replacement LNGCs would have to be staggered out from the late 2020s through to the late 2030s.

So going by MSI’s and WoodMac’s estimates, Qatar may fall short of meeting the scale or matching the timeline guided for its ambitious LNG shipbuilding plan.

The national oil company is widely expected to to stick to its standard practice of marketing LNG cargoes with shipping as part of the deal for the two mega projects.

Qatar’s ability to build and maintain a fleet of LNG tankers to ship cargoes contracted to buyers is still one advantage Qatar Petroleum enjoys over rivals.  In so doing, Mr Bull argues that Qatar Petroleum has moved ahead of supermajors such as ExxonMobil and Chevron, which have recently sounded the market for newbuilding LNG tankers, even though this may also compromise “potential upside” from any offtake contracts.

Alluding to a trend towards having no destination clauses for LNG offtake agreements, he said: “It will be to the detriment of Qatar LNG to include shipping in negotiation for offtake, which will then have to be signed on free-on-board basis to allow volumes to be taken where they are needed.”

Such “no destination clauses” primarily evolved with the emergence of US LNG as an alternative source of cargoes for major importers in Asia. The start-up of new LNG export terminals in the US has also bolstered liquidity and encouraged spot trades.

Poten & Partners global head of business intelligence Jason Feer noted that with Golden Pass LNG, both Qatar Petroleum and ExxonMobil as project partners “are not looking to presell all volumes”.

This spurs speculation of more Golden Pass volumes ending up on the short-term or spot market.

Mr Bull suggested that Qatar Petroleum is likely to “play the market” by “fixing shorter term offtake for cargoes from the US and seek long-term contracts for volumes from Qatar”.

But this also gives rise to another question – how may Qatar Petroleum seek to negotiate shipping to be included in the sales of its equity LNG cargoes from Golden Pass, given US LNG is commonly traded on fob basis these days?

The answer to that question inevitably weighs in on the extent Qatar may push forward with its ambitious fleet building and renewal plan.

Putting aside the changing state of play in global LNG trade, analysts generally agree Qatar Petroleum can still count on the cost advantage its North Field expansion may hold when competing for LNG sales against vast volumes of new LNG export capacity competing for offtake this year in the US, Russia, Mozambique and Canada.

Mr Feer remarked: “Qatar has very cheap gas and has freight advantages because it is closer to Asia than the US.

Mr Torres-Diaz said: “It is relatively not as difficult for Qatar to secure longer term LNG offtake because of its lower cost base.  Qatar’s short-run marginal cost is below $2 per million British thermal unit and transport cost for LNG from Qatar to Asia is $0.6 mmBTU; depending on the terminal location, US liquefaction cost is almost $3 per mmBtu and transport cost from the US Gulf is $1.2 per mmBtu.”

Mr Browne said that LNG from the North Field Expansion project is “the cheapest of all potential pre-FID [final investment decision] options out there”.

“We calculate that LNG from the new project can be delivered into North Asia at $6 per mmbtu, lower compared to $5.50 to $7.50 from Russia (subject to whether in winter and summer), $7.20 from Mozambique and $8 from the US.”

The consensus is also that the ongoing US-China trade spat can only benefit Qatar’s LNG exports.

Mr Torres-Diaz said: “US companies want to sign deals with Chinese buyers because China is the fastest-growing market; but Chinese buyers may prefer signing with sources outside the US, if the outcome of the ongoing trade talks remains unclear.”

That said, LNG buyers will still want to diversify their sources as a buffer against geopolitical tension in the Middle East that has threatened to trip up shipments from Qatar before.

Thus far, Qatar Petroleum has to contend with the reality of offtake contracts being pegged to shorter than desired contract durations and at lower prices as competition for LNG sales increases, with the market for the commodity softening drastically this year.

News reports in Pakistan suggested Qatar has voluntarily lowered its offer price in a bid to win another 15-year LNG deal from Pakistan.

Against this backdrop, Qatar Petroleum is expected to seek competitive prices from yards eager to clinch the LNGC orders.

“Qatar stands to get good prices if they place orders for 10 or more LNGCs with each selected yard — plus any options,” Mr Bull said.