The owners of the product claim it can boost efficiency by at least 30%, increase bunker tanker utilisation rate by at least 15% and achieve a 50% reduction in time spent on communication 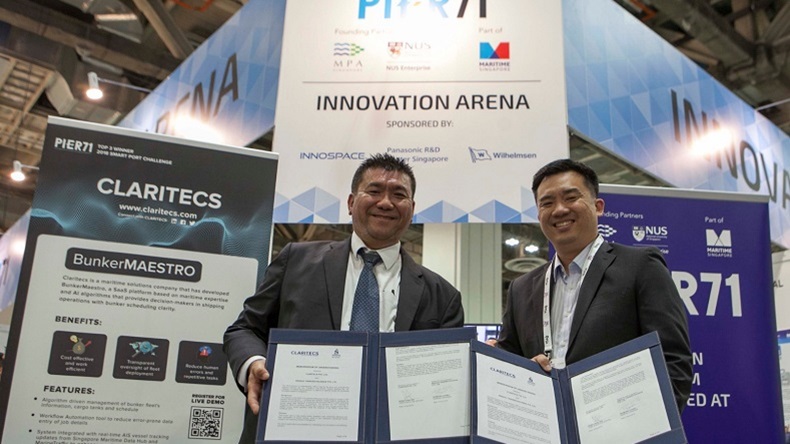 The deals, including one with Sinanju Tanker Holdings, will cover companies controlling about one-third of the current Singapore bunker tanker fleet.

The platform will help bunker operators to reduce data entry and manual scheduling while increasing fleet utilisation and providing clarity in bunker scheduling to ship agents, shipowners, terminals and other players involved in the bunker supply chain.

The web-based platform is an algorithm-based software as a service that taps Singapore Maritime Data Hub, known as SG-MDH, data. Claritecs is among the first to engage with SG-MDH to access the Maritme and Port Authority of Singapore’s port and ship-related real-time data — such as vessel information, vessel arrival and departure times and vessel positions — for practical application.

To track vessels further afield, BunkerMaestro will also be tapping datasets from MarineTraffic, the world’s leading AIS-based ship tracking service, to enhance the efficiency of bunker deliveries by synchronising the locations of receiving vessels with the position of bunker tankers.

The memorandums of understanding will see Claritecs collaborating with MarineTraffic as well as several Singapore bunker operators, who will pilot BunkerMaestro alongside their existing bunker scheduling workflow with a view to potential adoption.

The bunker operators are Sinanju Tankers Holdings, Sentek Marine & Trading and Global Energy Trading. Together with two other firms — New Maritime and United Maritime — who have separately signed letters of intent previously with Claritecs, the companies control about one-third of the current Singapore bunker tanker fleet.

Claritecs claims that using BunkerMaestro, will boost efficiency by at least 30%, increase bunker tanker utilisation rate by at least 15% and achieve a 50% reduction in time spent on communication.

“BunkerMaestro has gained much traction and the momentum has now propelled us to ready it for commercial rollout. We firmly believe that BunkerMaestro will add value to Singapore’s $25bn bunker industry,” Mr Wong said.

“We expect a rise in the number of fuel types and blends consumed by the shipping industry from 2020 due to the IMO’s global sulphur cap regulation. This will only increase the complexity of scheduling a bunker fleet and BunkerMaestro is well positioned to help bunker operators overcome this and at increased efficiency,” he added.

Blockchain could be a boon for bunker industry