EIA data show crude exports from the US Gulf coast exceeded imports for seven consecutive weeks through to March 15, marking what appears to be a new epoch in global oil export patterns

THE US Gulf region is poised to mark its first ever quarter as a net exporter of crude, signalling a rapid and earlier-than-anticipated reshaping of global very large crude carrier trading patterns for shipowners and operators over the remainder of 2019.

One VLCC loaded and sailed from the US Gulf Coast every six days in 2017, with that figure soaring to nearly 4 VLCCs a week by 2018, Lloyd’s List Intelligence data shows.

Greater volumes loaded on the largest crude tankers boosted exports from the US oil and petrochemical hub to fresh records during February and March.

Most VLCCs head east to India or Asia, where South Korea has usurped Canada and China to become the biggest buyer of US crude this year, according to vessel-tracking data.

There are currently 48.5m barrels of US Gulf-loaded crude on the water tracked on 23 VLCCs and three suezmax tankers sailing east, the most ever.

EIA data shows crude exports from the US Gulf coast exceeded imports for seven consecutive weeks through to March 15.

Saudi Arabia-US shipments contracted amid production cuts imposed by the Organisation of the Petroleum Exporting Countries and the introduction of sanctions slashed imports of Venezuelan crude from February. Net crude exports averaged 243,000 bpd over the first 11 weeks of 2019 through to mid-March.

Port infrastructure constraints that previously restricted the loading of VLCCs to offshore lightering areas outside US Gulf ports appear to be loosening, helping boost VLCC demand.

Modifications completed at Ingleside terminal at the port of Corpus Christi in late December now allow VLCCs to be partially loaded.

Three VLCCs have since taken on cargoes at the Oxy-owned terminal.

The most recent, DHT Peony, sailed from a nearby lightering zone after being topped up on March 24. The first two tankers, Athenian Freedom and Nasiriyah, discharged at Rotterdam, marking the first US Gulf-Rotterdam crude shipments on VLCCs.

A further two VLCCs loaded and sailed from the Louisiana Offshore Oil Port, known as LOOP, in February and March.

The deepwater port has exported crude from a handful of VLCCs over 2018, after 36 years as an import terminal.

A partly loaded VLCC Gener8 Perseus was tracked sailing from the Seaways Texas City terminal in early December, the first noted. December is the first month for which EIA data shows the US Gulf region recording net exports of crude.

The growing west-to-east market has boosted tonne-mile demand for the global VLCC fleet. VLCC tonne-mile demand from the US Gulf or February 2019 was measured at 42.6bn, more than double the prior-year period, according to Lloyd’s List Intelligence.

VLCC rates for a voyage to Singapore from the US Gulf currently stand at $5.3m, which equates to about $28,500 per day, according to information compiled from shipbrokers. That is slightly lower than the average rate over four key routes $29,500 per day. 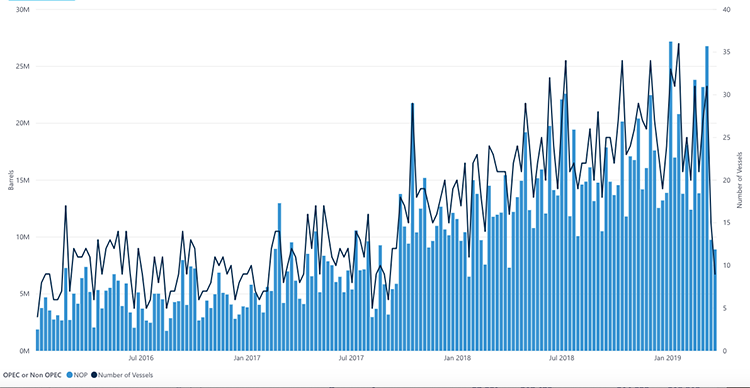