Ocean carriers are likely to be reluctant to deploy their biggest ships on the transpacific trades on a permanent basis until they have confidence that vessels of 18,000 teu-23,000 teu can be handled with a minimum of disruption along the supply chain, and that there is no risk of the industrial action that has brought chaos to the US west coast in the past

Terminals in the Californian ports of Los Angeles and Long Beach are able to handle ships of 18,000 teu or larger, but is the inland transport network able to cope with the cargo bulge each time a ULC is unloaded? 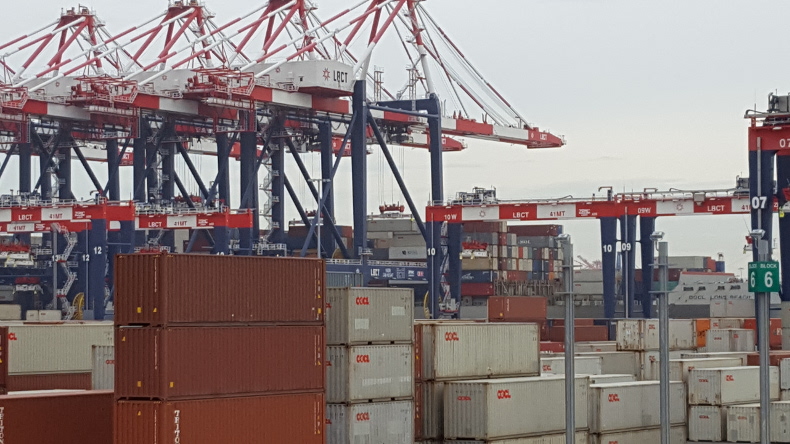 Source: LBCT Long Beach Container Terminal needs to let the world of container shipping know that it is able to streamline its inland transport connections.

LOS Angeles and Long Beach ports like to boast that they are “big-ship ready”, as indeed they are.

Several container terminals within the San Pedro bay complex are able to handle ships of 18,000 teu or more.

That point was underlined this week when Mediterranean Shipping Co’s 19,200 teu MSC Eloane arrived at APM Terminals’ Pier 400 in Los Angeles, which is owned by the line’s 2M partner Maersk.

Later, the ship will then proceed to nearby Long Beach where it will dock at MSC-controlled Total Terminals International facility,

This is the largest containership ever seen on the US west coast, somewhat bigger in terms of capacity than CMA CGM’s 17,800 teu vessel that arrived to great fanfare in December 2015, and five metres broader.

The 54 metres wide CMA CGM Benjamin Franklin was not fully-laden on that occasion, and only made two transpacific crossings before it returned to the Asia-Europe trades.

Neither has MSC Eloane arrived fully loaded. In fact, in terms of container lifts, it will not be a record for Pier 400.

Whether this is just a trial run or a temporary redeployment because of over-capacity in the Asia-Europe trades is not clear.

Both ports will trumpet the visit as proof that they are just as able to handle ultra large containerships as those in the Asia-Europe trades, where these vessels are now a regular sight.

The problem, though, is not water depth, berth length, or crane size, all of which are adequate, but inland transport connections. Unlike ships arriving in Europe from Asia, where they will discharge cargo at numerous ports, those berthing in southern California will have to unload a huge number of containers during a single call.

That creates potential congestion and bottlenecks right along the supply chain, both for deliveries by truck to nearby distribution hubs, and the much larger volumes being moved by train to Chicago and other destinations as far away as the Ohio Valley.

There is, though, another issue stirring that may give container lines food for thought as they consider whether their big ships are suitable for the transpacific trades.

The International Longshore and Warehouse Union is raising concerns about automation plans for Pier 400, even though the acceptance of new technologies is written into west coast dockworkers’ current contract of employment.

The scenes of five years ago during the protracted labour contract renewal negotiations of 2014-15 are still etched in the memories of carriers, shippers, forwarders, and terminal operators. At times, as many as three dozen ships were left at anchor outside the ports because of congestion at the berth, which spilled over into supply chain disruption across the country.

Eventually, the  deadlock was only resolved with the intervention of the White House.

Once the deal was signed, longer-term industrial peace seemed assured when the ILWU agreed to extend the five-year contract until 2022.

Is the union now preparing to walk away from that historic agreement with its opposition to APM Terminals’ automation plans?

Only two of the 13 container terminals in the LA-Long Beach complex have computer-controlled cargo-handling processes, TraPac in Los Angeles and Long Beach Container Terminal that is currently up for sale.

The ILWU and TraPac have had a rockly relationship, whereas LBCT has built up a better rapport with the union during the construction and start-up phase.

But as Orient Overseas (International) Ltd finalises the sale of the terminal in order to comply with Washington demands, could potential buyers be alarmed by the noises emanating from the ILWU? Already, shortlisted Seaspan appears to be having second thoughts.

But over-stretched intermodal services create bulges along the supply chain every time a big ship docks in southern California, while the ILWU seems increasingly militant. Will this scenario deter ocean carriers from permanently transferring such valuable assets as their ULCs to the transpacific trades, however much Los Angeles and Long Beach would want to shout out that they are just as able to handle these big ships as their opposite numbers in Asia and Europe?

Automation is changing the fortunes of ports

MSC Eloane a vote of confidence for the US west coast