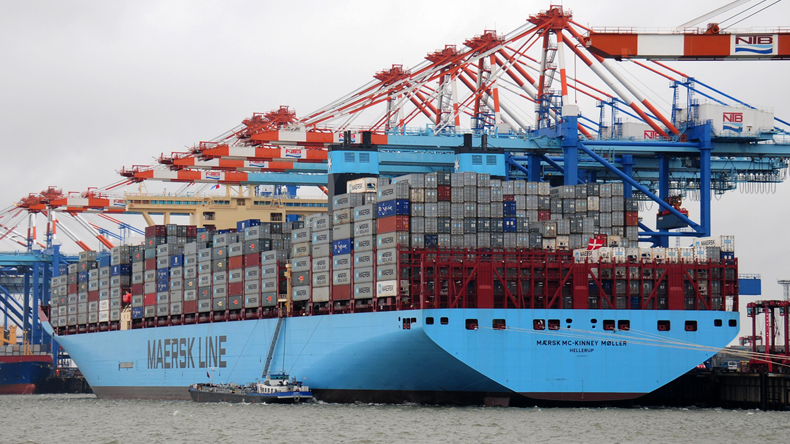 VLCCs continue to find a greener pasture in West Africa

PRESTIGE and the desire to own the biggest fleet is behind the latest spate of orders for ultra large containerships, rather than any economic rationale.

Reversing a recently held view that further ULC orders were likely, analysts at Drewry say that the orders for 22,000 teu vessels from Mediterranean Shipping Co and CMA CGM may not be the last.

"Since then, Cosco Shipping Holdings has announced plans to raise a huge $1.9bn war chest through the issuance of new shares, which will be used to part fund the purchase of 20 new ships, including 11 units over 20,000 teu and nine in the more modest 13,800 teu-14,500 teu range," Drewry said.

"Meanwhile, Korean line Hyundai Merchant Marine has also denied various reports that it is planning to splurge on as many as 14 vessels of up to 22,000 teu."

Moreover, the latest orders could presage the start of a new era of containerships, according to Alphaliner.

Since the delivery of the world's first ultra large containership in 2013, the 18,340 teu Maersk Mc-Kinney Moller, orders for similar vessels - sometimes with more than 21,000 teu capacity - have flooded in, almost all using the 400 m by 59 m footprint of Maersk Line's first-generation Triple-E-class.

This, however, is about to change.

While exact vessel specifications have not been made public yet, Alphaliner believes that both MSC and CMA CGM have chosen designs with nominal intakes of well over 22,000 teu for their next-phase mainline fleet expansions.
While more or less retaining the overall length of current super-jumbos, the next-generation vessels will be one row wider, with an increased beam of about 61.4 m.

"While these improvements allowed second-generation ULCs ships to reach intakes in excess of 21,000 teu, compared to around 19,000 teu for earlier models, the same design features will allow wider vessels to carry 22,000 to 23,500 teu," said Alphaliner.

"It has to be said of course, that all these nominal intake numbers assume 'perfect' conditions when it comes to factors such as container mix and weight. As with most containership types, the achievable maximum loads under real-life conditions will be notably lower than the on-paper numbers."

Orders for 11 vessels for MSC and nine for CMA CGM suggest that by 2020, two weekly Far East-Europe services will be operated with this tonnage.
Drewry said the latest developments highlighted "the shortage of logical assumptions that one can reasonably apply when predicting newbuilding plans".

"Our rationale for being doubtful on new orders included financing constraints, latent market overcapacity and the size of the existing orderbook," Drewry said. "Additionally, we believe that the scale economies argument for wanting ULCVs in the first place is false as cost savings at sea are countered by higher costs at port, which in theory should have reduced the industry's appetite for them."

Alphaliner said the new designs should not, however, pose new technical challenges for port terminals, given that they will fit into most terminals that already handle the current-day 'MGX23' ships.

"Since draft and length remain almost unchanged compared to today's mainline ULCS of 20,000 teu, most major ports can accommodate the ships at selected berths," it said. "In many cases, terminals built to handle jumbo ships still have some wiggle room and new or upgraded cranes can reach across 24 rows."

LIQUEFIED natural gas fuel is set to receive a major boost from CMA CGM's landmark order, despite the higher price of initial investment and the shortage of available bunkering infrastructure, according to Wärtsilä's head of gas solutions.

CMA CGM's decision to opt for LNG-fuelled engines for its nine 22,000 teu boxships raised speculation about a potential surge in demand for LNG fuel as well as the ability of existing bunkering infrastructure to support it in a global scale.

"Deepsea shipping has been kind of waiting for the first mover. And the first mover is now there and I am definitely convinced this will result in more orders by the other players in the future," Wärtsilä Marine Solutions vice-president, flow and gas solutions Timo Koponen said.

Part of the sluggish growth in LNG use for fuel is the cost associated with initial investment; CMA CGM will pay an extra $17m for each ship.

Initial investment is higher than with conventional vessels, but at the same time, gas technology has developed over the years and the costs have been dropping, Mr Koponen said. This stems from reduced prices from equipment manufacturers and shipbuilders, who have become more accustomed to gas technologies.

US-BASED companies are poised to get top billing as the most active buyers of foreclosed vessels, which includes vessels acquired in public auctions or from the banks themselves.
An analysis of sale and purchase transactions by online market valuation provider VesselsValue.com reveals that in 2017, US companies have bought 52 distressed vessels for a total of $624m.

This stands in stark contrast to 2016, when there were no recorded distressed transactions from US-based companies.

Greek buyers were the second most active in 2017, with distressed vessel purchases totalling $385m, followed by South Korean and Chinese buyers with $228m and $126m respectively.

The two most active buyers were JP Morgan Global Maritime with $250m in distressed acquisitions and Eagle Bulk Shipping with $153m. The vessels targeted by US buyers were bulk carriers, containerships, and offshore vessels. Coincidentally, asset valuations in these three sectors hit 25-year historical lows in 2016, but their values have rebounded in 2017.

VLCCs continue to find a greener pasture in West Africa

CRUDE oil exports from West Africa have continued to rise as production disruptions in Nigeria have subsided. Cargoes loading in Nigeria tend to move on suezmaxes more often than crude in Angola, which is shipped on very large crude carriers to Asia.

This rise in outbound shipments from West Africa has come at a time of continued Organisation of the Petroleum Exporting Countries production cuts, from which Nigeria is exempted. More VLCCs had been loading in West Africa already in 2016 and 2017 as a result of a surplus of light sweet crude oil in the Atlantic Basin.

The main reason for the rise in cargo flows from West Africa to Asia has been the addition of light crude barrels from the US. This is an important dynamic for the VLCC and suezmax markets as these West African exports generate more tonne-mile demand for ships when they are moved to Asia.

This trend certainly has not been enough to offset the overall bear market, which is a result of tanker oversupply. It is changing the nature of the markets, though.

VOLUME growth on the Asia-Europe and transpacific trades maintained strong 2017 performance through the third quarter, rising a respective 6.2% and 8.8% year on year.

New data published by Container Trades Statistics, including the latest September figures, shows that liner operators shifted 4.2m teu on Asia-Europe services in the three months ending September 30 against last year, as volumes continued to rebound on the back of the strengthening European economy.

The health of both the US and Canadian economies also drove Asian imports into North America during the three-month period, climbing to 5.1m teu compared with the 4.7m teu reported in 2016.

FORMER Maersk Group chief executive Nils Smedegaard Andersen has been appointed as chairman of the board of European shortsea feeder operator Unifeeder.

Mr Andersen, who takes over from former Hapag-Lloyd chief commercial officer Jesper Prëstensgaard, has not worked in shipping since leaving Maersk in 2016. He has since been a non-executive director at BP and Unilever, and chairman of Dansk Supermarked.

Mr Prëstensgaard will stay at Unifeeder as deputy chairman.

Having bought out Weco Shipping's 50% shares in the medium range product tanker owner this March, Stena Bulk said the business activity formerly conducted under the name of Stena Weco will be incorporated into the parent firm.

SIX crew members of a Peter Döhle container vessel taken hostage off Equatorial Guinea have been released from captivity.

The master, chief mate, second officer, second engineer, bosun and cook were taken hostage from Demeter on October 21. The six men spent two and a half weeks in captivity before being released.

Peter Döhle worked closely with the local authorities and professional advisers to secure the earliest release of its crew, all of whom are now safe, the shipmanager told Lloyd's List.

NORWAY's Statoil Petroleum has picked Singapore-listed SembCorp Marine's unit in a tender for the turnkey engineering, procurement and construction of a newbuilding floating production, storage and offloading hull plus living quarters.

Both parties have signed a letter of intent regarding the project, which will be deployed to the Johan Castberg oil field development, said SembCorp Marine in a statement.

If Statoil finalises the contract with SembCorp Marine Rigs & Floaters, the deal could be worth up to $490m.

FINCANTIERI has made a proposal through its Fincantieri Oil & Gas arm to delist its offshore shipbuilding subsidiary Vard Holdings from the Singapore exchange.

The move is contingent on the local bourse's as well as Vard shareholders' approval, the Italian shipbuilder said in a statement.

At least 75% of shareholders have to approve the deal, with less than 10% opposing it.

If the above conditions are achieved, Fincantieri Oil & Gas will then make an offer to Vard's shareholders of S$0.25 cash per share for a total consideration of S$60.9m ($44.9m) for the remaining shares it does not own.

"We believe the debtor has been able to follow a rehabilitation process in an earnest manner and has enough capabilities to normalise the business in the future," a court document from the Seoul Bankruptcy Court's website said.
Goseong O&S, which was established in 1978, produces vessel parts for liquefied natural gas carrers and containerships.