THE withdrawal of valemax ownership doesn’t spell the beginning of the end for Vale’s dominance in longhaul dry bulk shipping. Rather, it is the end of the beginning. 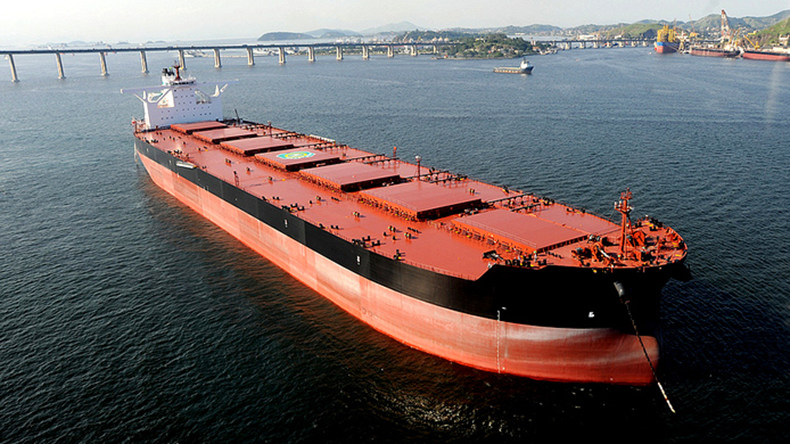 Vale looks to the next generation of VLOCs

Rickmers rescue on hold until 2018

Vale looks to the next generation of VLOCs

THE withdrawal of valemax ownership doesn't spell the beginning of the end for Vale's dominance in longhaul dry bulk shipping. Rather, it is the end of the beginning.

While delivering the final vessel of its owned 400,000 dwt fleet earlier this month, the Brazilian mining giant has backed the construction of newbuilding capacity that accounts for up to one third of the total bulker orderbook, according to a Lloyd's List study of company announcements and broker data.

The 32 so-called second generation valemax and 37 "guaibamax" vessels will carry iron ore from Brazil to mainly China when they start to be delivered by Chinese and South Korean yards from 2018, just as Vale's S11D project with a nameplate capacity of 90m tonnes per annum gradually ramps up.

Like the first generation of valemaxes, those new additions of second and third generations of very large ore carriers to Vale's shipping capacity are aimed to reduce freight cost per sale unit so the miner can compete with Australian majors such as BHP and Rio Tinto when selling to Asian customers.

The difference this time is that Vale has secured the capacity without incurring large capital and operating costs while befriending conventional vessel owners and operators, especially those in China. Vale does not own or charter in ships, but instead provides contracts of affreightment to shipping companies that want to ship iron ore for the miner.

"Vale has established solid partnerships with shipowners and the contracts we have allow us to fulfil our ultimate objective of transporting our material," the company told Lloyd's List an email. "In this sense, the company can focus its resources and efforts on its core businesses, leaving specialised companies with the task of providing shipping services."

In its project of third generation very large ore carriers, which Vale calls guaibamaxes, the company has offered COAs to Chinese and South Korean owners that order ships in yards in the two countries. With a carrying capacity of 325,000 dwt each, those vessels named after a Vale-owned terminal in Rio De Janeiro will have a wider trading range than valemaxes that generally serve Brazil-China trade.

MARITIME companies operating in the European Union will have to disclose their ultimate owners in a publicly available registry, according to a new ruleset agreed by the bloc's authorities, adding to regulatory efforts to stamp out money laundering and corruption involving EU companies.

Representatives of the European Parliament and the European Council, composed of EU member states' governments, agreed on Friday to accept the European Commission's proposed changes to the EU's fourth anti-money laundering directive.

THE amount of money committed to new containership orders remains subdued this year despite a recent flurry of activity.

New data from Clarkson Research shows that investments worth a combined $4.7bn were placed in the first 11 months of 2017, most of which was accounted for by ships of 15,000 teu or more.

GLOBAL demand for coal is undergoing a major change as lower gas prices, a surge in renewables and energy efficiency improvements put a dent in consumption patterns.

But there is a major transformation under way in India's coal industry, which is likely to provide opportunities for dry cargo shipping, although a shift in seaborne trade patterns is expected.

Several factors, including a decline in Russian crude exports from the Baltic and the Black Sea ports and the large number of newbuilding deliveries, will lead to a deterioration in market fundamentals.

THE Alliance, consisting of leading container lines Hapag-Lloyd, Yang Ming, and Ocean Network Express, has revealed further details of the 33 services to be covered by its fleet of over 250 vessels and connecting 81 ports worldwide effective from April 2018.

DANIA Ship Management is looking to expand its business further into the dry bulk carriers space with its partnership deal signed with Clipper Fleet Management.

Rickmers rescue on hold until 2018

PLANS to launch a new incarnation of Rickmers group, originally due to be signed off last month, are now on hold until at least next month, a spokesman for Zech Group has confirmed.

MSC goes ahead with plans to stretch boxships to expand capacity

MEDITERRANEAN Shipping Co is to increase the length of up to 11 containerships of 14,000 teu at a subsidiary yard of China Shipbuilding Industry Corp.

THE UK port of Tilbury is pressing ahead with plans to develop a new facility able to handle ro-ro traffic, provide more warehousing capacity, and expand distribution services.

THE Maritime Union of Australia has ended a strike at Webb Dock in Port of Melbourne's Victoria International Container Terminal after the management agreed to reinstate a previously dismissed casual dockworker with pay.