Class of 2017: the year that cyber security became a thing 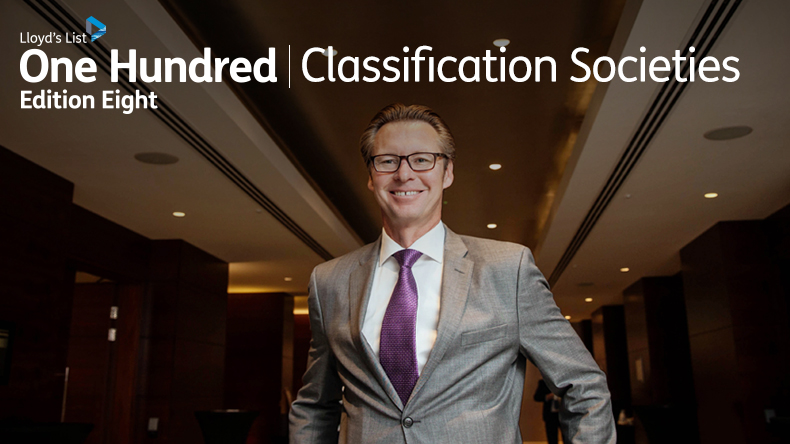 Under Knut Ørbeck-Nilssen’s watch, DNV GL has established itself as the leader in digitalisation initiatives.

DNV GL retained the top spot in 2017, thanks to an increase in gross tonnage and fending off tight competition from ClassNK – even though the Japanese register got the best of it in terms of deadweight tonnage. Supremacy in the general cargo fleet, compounded by a strong presence elsewhere, facilitated the overall performance.

Under Mr Ørbeck-Nilssen’s watch, the company has established itself as the leader in digitalisation initiatives, launching a data-sharing platform, introducing e-certificates on board its vessels and developing virtual reality surveys, among other innovative initiatives.

THE Tokyo-based classification society saw a slight decrease in gross tonnage in 2017, despite a few different initiatives that demonstrated a forward-looking attitude. In spite of this loss, ClassNK is emphatically dominant in the bulker fleet, claiming by far the biggest share.

ClassNK was the first to roll out electronic certificates this year, in partnership with the Liberian Registry. It also revealed a five-year research and development roadmap, focusing on developing rules, survey technologies and environmental protection policies, as well as “revolutionary technology”.

AFTER managing to grow in 2016, ABS continued its expansion in 2017, having the biggest share of the global tanker fleet under its purview.

Beyond its direct commercial endeavours, ABS continues to be among the most vocal classification societies when it comes to promoting cyber-security. It launched a notation for cyber-safety compliance in 2017, having launched a set of cyber-security guidelines last year.

THE difficult year seen internally in 2016 was followed by a minor increase in gross tonnage for Lloyd’s Register in 2017, during which the classification society held the top spot in the gas tanker market.

It may have not been able to beef up its armada in the core shipping segments, but LR is arguably a leading voice in the industry’s quest for decarbonisation, conducting research on the future of low-carbon fuels and offering up its expertise to initiatives that aim to bring various stakeholders together and propose solutions.

ASSUMING responsibility for the safe construction and operation of the world’s largest containerships could be a significant catalyst for growth. BV secured the classification of CMA CGM’s 22,000 teu LNG-powered vessels, taking on a new challenge that will demonstrate its quality.

Apart from locking down this landmark deal, BV also increased its gross tonnage, having the largest presence in combined carriers, and is focusing attention on a digital revamping, which utilises more efficient surveying methods.

MR Licheng concluded his term as IACS chairman at the middle of the year that saw China’s premier classification authority acquire more tonnage and hold a considerable share of the bulker fleet.

Among 2017’s highlights, CCS, along with the HNA Group, established an industrial alliance to develop unmanned cargoships in China, positioning itself as the leading safety authority on the matter, nationally at least.

With new regulations leading to more complex and sometimes novel shipbuilding demands, it remains to be seen how CCS’s influence over Chinese shipyards as an advisor will grow.

ARGUABLY the classification society with the toughest year, Korean Register's 2017 was marred by the capsize of the KR-classed very large ore carrier Stellar Daisy, leaving 22 of the 24 seafarers on board still unaccounted for.

The aftermath included the Busan coastguard raiding KR’s offices and could leave a dent in the classification’s credibility, although that remains to be seen and will also highly depend on what the authorities’ investigations conclude.

KR’s fleet levels dropped in 2017 but the society will be in the spotlight in 2018; Mr Lee serves as the current IACS vice-chairman and will take over the chair for a year in July 2018.

DESPITE controlling the equivalent of about one-eighth of the biggest classification societies, RINA has the largest share of the passenger vessel fleet, the organisation benefiting from one of the most well-performing sectors to grow further.

The Italian classification society can also boast landing a certification contract for the first floating liquefied natural gas project to be constructed in East Africa, courtesy of Eni East Africa.

WITH a bigger fleet, the Indian Register spent much of 2017 expanding its presence in different regions and adding to the services it offers to its members.

Before opening an office in Malaysia, the IR also set up shop in Iran, identifying strong potential for growth in the Middle East market.

It also developed a set of cyber safety rules for its members, based on the IMO’s guidelines and other national standards.

TONNAGE may have dipped, but 2017 could prove to be the beginning of an upward path for the Russian Maritime Register of Shipping, giving it greater recognition on work beyond its traditional sectors of focus, such as icebreakers.

The RS took over the IACS Safety Panel, which focuses on assisting IACS’s contributions to the IMO safety deliberations. The RS will chair the panel until the end of 2019.

Considering that this period covers the launch of an IMO scoping exercise for potential regulation of unmanned vessel, Mr Palnikov has an opportunity to leave a strong mark on the industry and contribute to a long-term challenge.