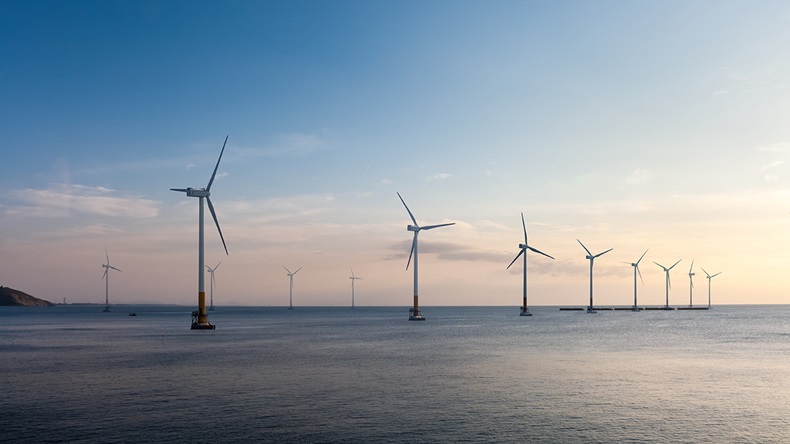 Offshore wind farm installations in China will surpass those in the UK and Germany by 2022.

Potential revenues from owning and operating vessels in the wind farm sector – including installation ships and other equipment – is expected to reach approximately $3bn in the next three to four years.

Backed by Beijing’s ambitious plan to increase this kind of renewable energy, and in a sector where foreign entry is restricted, companies such as China Cosco Shipping Group and China Merchants Group are not shy of launching new ventures.

The companies have established joint ventures with overseas offshore engineering specialists, who have also detected the possibilities in China’s coastal waters, in a bid to scoop up the market.

There are, of course, some uncertainties. There are various impediments to the possible development of China’s offshore wind farms.

Compared with Europe, wind from the ocean here is less powerful and the government’s subsidy on electricity price is less flexible – these could mean a relatively low return on investment.

A market with huge potential

The 59.5 m long, 32.2 m wide ship, equipped with a level II dynamic positioning system and a crane capacity of 400 tonnes, will be operated by a newly established joint venture between the two companies, in which Cosco Shipping invested more than Yuan100m ($15.3m).

It is a tiny investment compared to the underlying value of the fast-growing business the state-owned conglomerate has decided to explore.

By the end of 2016, China’s total installed offshore wind power capacity stood at 1.6 gigawatts, trailing only the UK’s 5.2 GW and Germany’s 4.1 GW, according to the Brussels-based Global Wind Energy Council.

Make Consulting, a leading renewable energy consultancy, expected Chinese installations to top approximately 7 GW by 2020, including 3.2 GW of new projects that were under construction as of August 31, 2017.

The investment required for constructing and running the 7 GW wind farms is estimated at roughly Yuan175bn to Yuan210bn ($27bn-$32bn), of which 8%-12% are costs of hiring vessels and related equipment for offshore turbine installation, operation and maintenance, says Make Consulting analyst Andy Lee.

That means revenue potential for vessel owner/ operators by 2020 could hit between roughly $2.2bn and $3.9bn in total (although some of the potential has been cashed in on the already installed projects).

Mr Lee added: “Chinese shipping companies are facing a profit squeeze amid an industry downturn and rising competition, so they are seeking new space for growth.”

Keegan Kruger, a Bloomberg new energy finance wind analyst even wrote in a recent report that the number of installations in China will surpass those in the UK and Germany by 2022, and will account for one-third of the total global market by 2030.

A senior manager from China Merchants Group’s shipping department is also optimistic, saying his company is bullish about the sector’s future.

The manager said: “The government has been very supportive of the offshore wind power industry, and has approved many projects, so the prospects look bright.”

Sinotrans also acquired an installation vessel, Tera Sunrise, in July, from its Singaporean partner via a bareboat charter hire.

As for conglomerates such as Cosco Shipping and CMG, the “emerging market” has presented them with opportunities not only in shipping, but also in shipbuilding.

Including the numbers of vessels on order, there will be roughly 20 installation ships in service by 2018.

But only 70% of them have qualified specifications – especially cranes – to install turbines with a capacity of 6 MW and a height of 100 m, or above. These turbines are the main workhorse in the offshore wind farms China is building, according to Mr Lee.

There will be 20 such wind farms by 2019, requiring roughly 30 installation vessels with crane capacities of more than 1,000 tonnes, when also factoring in China’s long coastline that increases vessel travelling distance.

A rough estimate will be see a shortfall of 10-14 competent ships. Most of the gap will be filled by newbuildings rather than secondhand ships from overseas, Mr Lee says, as the existing fleet has only a few units that can meet the technical requirements.

Cosco Shipping Heavy Industry, the shipbuilding arm of Cosco Shipping, has already won an order to build one offshore wind turbine installation vessel for DEME in February, as part of their partnership agreement.

The DP3 vessel, with a crane capacity of 3,000 tonnes, is scheduled for delivery in the fourth quarter of 2019. The price was not disclosed, but industry sources said this type of ship can cost more than $100m.

A recent Make Consulting study on the investment return of a number of 200 MW offshore projects in five key Chinese offshore wind provinces found that their internal return ratio was only 7%-9%.

Faced with huge investment risks, this ratio is not enough to sustain the enthusiasm of developers, quite apart from underlying quality issues and operational and maintenance costs.

Make Consulting added: “Lower capex (capital expenditure) and improved quality of turbine models will be critical for the rapid development of offshore wind power. Costs won’t go down substantially within the next five years.”

The CMG shipping manager said his company’s entry into the new territory is laced with caution, and ordering newbuildings in the short term is definitely not on the cards, as assets are expensive while the market remains volatile.

He said: “We are still testing the water.”

Moreover, Chinese shipping firms need time to learn from their foreign partners how to operate the vessels, the manager added.

That said, Beijing’s thirst and deep pockets for the offshore green energy can’t be underestimated.

Some Chinese energy giants have already found a quicker way to gain foreign know-how, knock down costs and push ahead with projects at home, which might well benefit their compatriots in the shipping industry.

Among a string of similar deals, last year, state-owned China Yangtze Power and China Three Gorges Corp together spent $773m on an 80% stake in WindMW GmbH, the owner and operator of Germany’s largest offshore wind farm.