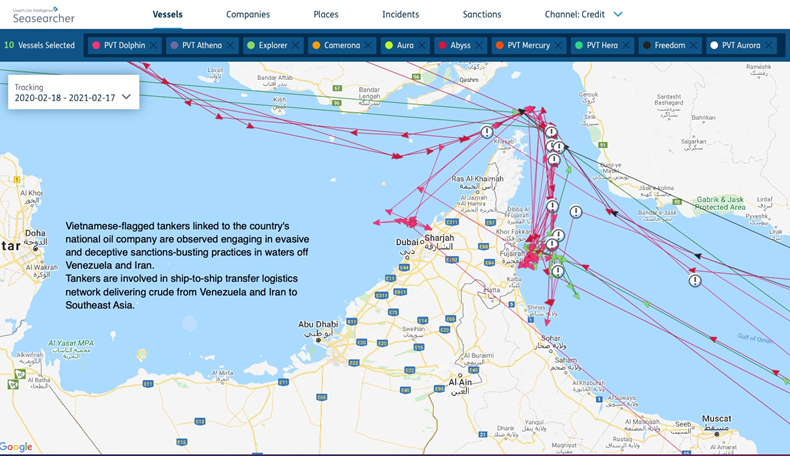 
Two Vietnamese state-owned shipowners are involved in transporting US-sanctioned Iranian and Venezuelan crude on a fleet of 10 tankers, according to vessel-tracking data analysed by Lloyd’s List. The Vietnam-flagged tankers form part of a fleet of some 130 tankers identified by Lloyd’s List as being involved in sanctioned trades and have not been designated or identified by US authorities.

P&I clubs are getting some — but not all — of the 5%-10% premium increases they are seeking in the current renewal round, according to big name brokers. There is also anecdotal evidence that the not-for-profit mutuals have been mindful of the difficulties facing shipping’s most stricken sectors, and have let them off comparatively lightly.

Maersk plans to have a methanol-fuelled ship in its fleet by 2023. All newbuildings following that will have the ability to run on carbon-neutral fuels.


Ince senior partner Julian Clark believes the future looks tricky for mid-tier law firms. His solution is to bring consultancy and technology into the fold to offer clients a range of regulatory and risk advice. The first step is an exercise in providing cyber threat hunting and incident response to Ince’s clients, but there is more to come with machine learning-fuelled sanctions due diligence on the way.

Decarbonisation is creating a safety gap, which, if left unmanaged, could delay industry progress, says DNV GL’s head of maritime Knut Ørbeck-Nilssen. The class society has issued a paper this week identifying safety risks arguing that there is a dark side to innovation, and a new risk picture is emerging” related to cyber security, automation, new fuels and digital technologies.

Fires on containerships can be dangerous and devastating. But even on the biggest boxships, crew are only required to have the minimum level of training to combat specialised risks — that’s insufficient to meet the requirements of modern ultra-large containerships, argue the experts.


Dry bulk tonne-mile demand falls as Argentine grains miss the boat. Pacific demand for Argentine wheat has dropped as Asian grain buyers shift to abundant Australian produce. In the first two months of the current export season, loadings from the South American nation only reached 3m tonnes, half as much as a year ago.

In our weekly markets briefing: Before anyone gets too excited about oil price and talk of a super-cycle everyone would do well to remember that with lockdown measures across the world still restricting demand for transport fuels, tankers are still feeling the double whammy of reduced exports and inventories’ drawdowns. Meanwhile, the roaring success enjoyed by the container shipping sector since the demand recovery that emerged in the third quarter of 2020 has not been felt equally across the supply chain. And in dry bulk, the positive fundamentals are starting to attract investments

Weather conditions in the north Pacific have led to another Maersk containership losing containers overboard.

Retail investors appear to be buying into shipping, as they see upside in values, according to equity analysts. Share prices have risen an average of 34% across the shipping portfolio since the start of the year.

A new factory set for eastern Norway is the latest ambition by a hydrogen fuel cell developer that wants its own system in the market by 2022-2023. The Norwegian company wants to build a 1.2 gigawatt hydrogen fuel cell factory to service ships and heavy duty installations, potentially starting operations in 2022.

Wallenius Wilhelmsen has unveiled a concept for the world’s first wind-powered pure car and truck carrier, saying its design could cut emissions by up to 90% compared with today’s vessels.

Maersk says the lunar new year had resulted in “no significant” slowdowns in demand out of Asia, and there could be missed sailings due to vessel slidings resulting from the “continued operational delays” especially in the San Pedro Bay ports of Los Angeles and Long Beach.

Danaos chief executive John Coustas drew attention to the fourth-quarter 2020 results, saying ‘we witnessed the most outstanding turnaround in the container industry for as long as I can remember’.

Fresh from sealing a new port concession in the southwest of Saudi Arabia, Hutchison Ports is looking at consolidating its presence to the east of the Arabian Peninsula with an agreement to conduct a feasibility study for the expansion of Sohar Port in Oman.