Free to read: Wakashio spill raises questions over compensation and crew fatigue | Rusting Yemen tanker threatens to dwarf Mauritius spill | Why not all is well with the consensual restructuring of Xihe Group 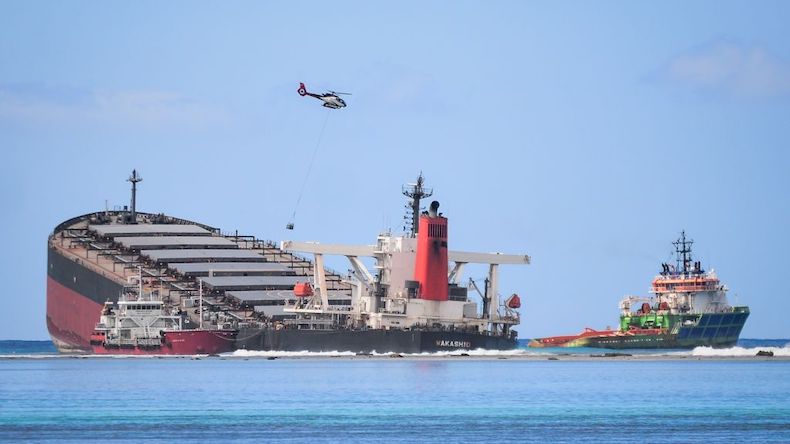 
Pandemic crew-change prohibitions meant three of the 20 crew on board Wakashio were on extended contracts when the vessel grounded off Mauritius. Automatic Identification System data from Lloyd’s List Intelligence also shows that it navigated much closer to the country’s coastline than other bulk carriers traversing on the Brazil-China route via the Indian Ocean.

The bulk carrier that caused a serious oil spill off Mauritius is not covered by $1bn industry scheme for laden tankers, and any eventual payout may not meet clean-up costs and damages, a leading lawyer has warned.

Investigations by authorities in Mauritius and Japan, flag state Panama and the owner Nagashiki are underway to determine the cause of the Wakashio incident.

The International Maritime Organization is drawing up a contingency plan to deal with the growing threat of an oil spill from the abandoned tanker Safer in the Red Sea. A spill from the floating storage vessel, left to rust off Ras Isa since 2015 with 1.1m barrels of oil on board, would dwarf that of Wakashio.


OCBC Bank’s now successful filing to place some of Xihe entities under judicial management is proof that not all lenders are fully on board with what has been deemed a ‘consensual restructuring’.

Compensation for spills under the 2001 Bunker Convention do not even come close to paying for clean-up operations and pollution damage, writes Martin Hall, head of marine casualty at Clyde & Co.

A survey of seafarer trends to be conducted over the coming months must begin with an analysis of shipping’s own trajectory. Until we know where we’re going, we won’t know who to recruit, argues Richard Clayton.


The underlying global economy is on a positive trajectory and the world is on the way to stronger demand for energy products, according to Torm’s executive director Jacob Meldgaard.


The Panama-flagged, 203,130 dwt Wakashio, which ran aground on the reef of Point d’Esny on the southeast coast of Mauritius last month, broke in two during the weekend, Mitsui OSK Lines said in a statement.

Fujian has become the latest Chinese coastal province to follow the call of policy makers in Beijing by consolidating its regional ports, following similar moves elsewhere in the country.

State-owned Yingkou Port Group has been criticised by China’s securities regulator for embezzling funds from its Shanghai-listed unit.

Coronavirus cases at Hong Kong’s Kwai Tsing Container Terminals now stand at 63 connected to 10 companies, up from 14 cases at the end of last week. The affected workers mostly come from sub-contracted companies doing work for the terminal operators.

Intra-Asia specialist Gold Star Lines is the latest to add a direct Vietnam to China feeder service, which will also provide good connectivity to transhipment hubs in south China, as well as Shanghai.