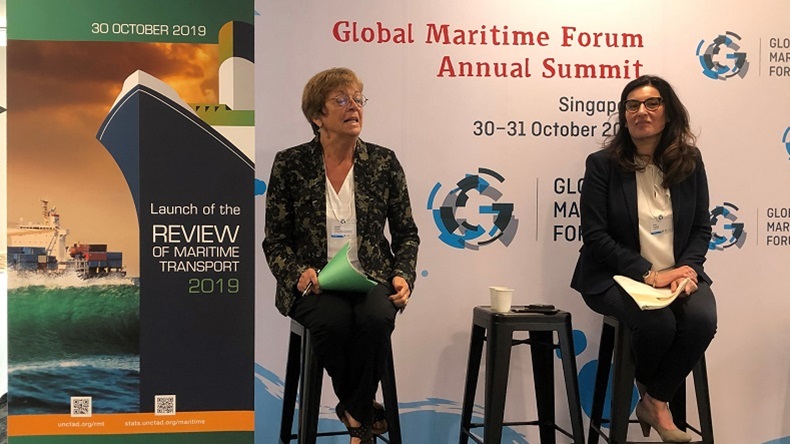 
The UN Conference on Trade and Development expects maritime trade to continue rising at an average annual growth rate of 3.4% over the next five years. However, it noted certain risks that might exert pressure on trade.

The rapid development of zero-emission vessels is an entirely feasible ‘moonshot’ for the shipping industry to reach for, writes Richard Meade. But influencing the wider energy system and creating an infrastructure where dependable future fuel production can be relied upon is the challenge where the maritime sector has limited agency.

A global economic crisis could have the biggest impact on shipping over the coming decade, but this event is deemed less likely that some other risks such as cyber attacks or geopolitical tensions.

Other industries should follow the example of shipping, whose groundbreaking set of bank lending guidelines have set a benchmark for environmental responsibility.


Safety campaigners are calling for more collaboration and leadership in efforts to reduce the industry’s accident record. Lack of standardisation across the industry for the classification of incidents creates barriers to accurately analysing accidents on an industry-wide scale.

While the search for a green fuel solution continues, shipowners are postponing fleet upgrades. Yet this hesitancy could help to solve the overcapacity issue, writes Linton Nightingale.

It has been an extraordinary year for tanker markets, which have been front and centre of Iran-US-China geopolitics dominating world trade, writes Michelle Wiese Bockmann.


Poland’s state-owned gas company is expected to sign on charters with two or more shipping lines for the staggered charters on about six LNG tankers. These tankers will carry cargoes contracted on free-on-board basis from Sempra Energy’s Port Arthur and Venture Global LNG’s Calcasieu and Plaquemines projects.

Australia has started to supply very low sulphur fuel oil ahead of the introduction of the International Maritime Organization’s regulations on January 1.

There are indications that container lines are looking for price rises of 15%-20% in early November on transpacific ocean freight trades, according to digital rates specialist Freightos, although US west coast prices will still trail last year’s rates by more than 35%.


A single cyber attack on major Asia Pacific ports could cost $110bn, roughly equivalent to half of all losses from natural catastrophes globally in 2018, according to new research from the University of Cambridge Centre for Risk Studies.

Singapore’s Maritime and Port Authority and classification society DNV GL have agreed a collaboration deal to drive digitalisation and decarbonisation.

A Middle East sovereign wealth fund has announced plans to invest in a US company aiming to develop the largest LNG export structure to link gas from the Permian Basin to the global LNG market.

Neils Aalund, senior vice-president of the West Gulf Maritime Association, has been elected as the president of the International Propeller Club of the United States for a two-year term starting on October 17.

GasLog Partners has maintained its growth guidance for 2019 despite a decline in profit in the third quarter.

Navios Maritime Containers is upbeat about prospects headed into 2020 despite a drop in third-quarter profit and revenue.