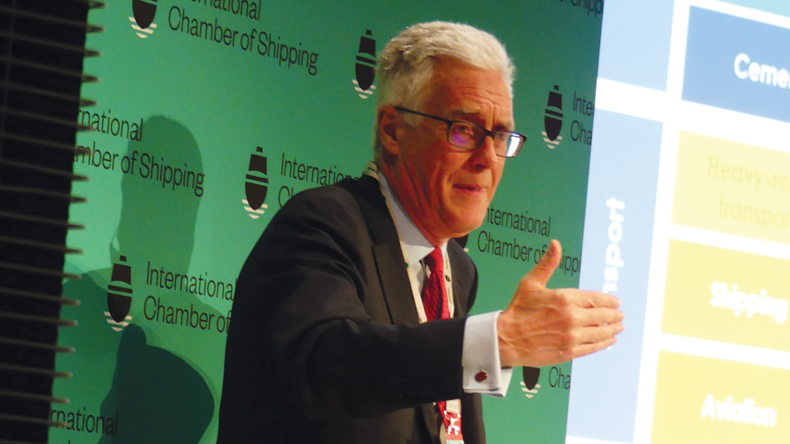 
Shipping emission targets need to be brought forward one generation earlier than expected to meet world climate change goals, while freight rates will likely double during the transition to greener, zero-carbon marine fuels, an International Chamber of Shipping conference has been told.

The shipping industry is entirely able to adapt to a doubling of freight rates to fund an early transition to zero carbon emissions and should establish a carbon fund to drive urgent development, according to Tovald Klaveness chief executive Lasse Kristoffersen.

The world’s largest classification society has downgraded the prospects of hydrogen playing an important role in decarbonising global shipping, as its expects liquefied natural gas and ammonia will play a starring role over the next 30 years.

Refineries face uncertainty next year with yields supported by international shipping’s low-sulphur transition in the early months expected to be offset by damages from a lingering US-China trade spat in the latter half.


US container traffic rebounded in July and August ahead of the September 1 rise in duty, with a further spike expected in November driven by the scheduled December rise in duties on Chinese products.

The UK’s maritime sector contributes more than £46bn ($56.9bn) to the economy, according to a new report from the Centre for Economic and Business Research.

The Lloyd’s List Podcast: LISW Day 3 — The cost of zero-carbon shipping. How do we fund zero-carbon shipping and accelerate it beyond the current IMO targets? Double freight rates and use the IMO seems to be the message from our panel. Joining us from around London International Shipping Week we have a stellar panel of experts: businessman, academic and former chairman of the UK Financial Services Authority, Lord Adair Turner; Director of the Environmental Defense Fund (and former podcast guest) Baroness Bryony Worthington; and Grimaldi Group managing director Emanuele Grimaldi.


Indian refiners are increasing low-sulphur fuel oil production in preparation for the January 1, 2020 implementation of a 0.5% global marine fuel sulphur cap, according to speakers at the Annual Asia Pacific Petroleum Conference 2019 in Singapore.

Maritime chief pledges to lead the fight against piracy to counter the negative impact of attacks in the Gulf of Guinea, which are deterring would-be investors in Nigeria’s shipping sector.


Cosmo Oil, which owns six very large crude carriers, has scrubbers installed on three of its ships. The refiner says that scrubbers will be the best economic option in the next five years to comply with the International Maritime Organization’s 2020 regulations.

The UK has condemned Iran’s “complete disregard” for assurances given to secure the release of the tanker Adrian Darya 1 and will raise the issue at the UN later this month.

Evergreen Marine has confirmed the ordering of 10 super-sized containerships at three different yards, having modified its original plan.

The US port of Brunswick, in Georgia, might be able to reopen to limited vessel traffic later this week if an “aggressive” timetable can be followed that enables ships to bypass the 20,995 dwt Golden Ray, which blocks the port’s main shipping channel after capsizing on Sunday.

P&O Ferries plans to launch a new daily ro-ro ferry service later this month in an effort to boost its cross-Channel services and improve delivery times to the UK’s southeast.

Hapag-Lloyd is expanding its digital product portfolio to include cargo insurance through its online portal.

Environmental issues and the regulatory hurdles that owners will have to comply with to meet them were the focus of a presentation from Watson Farley & Williams held as part of London International Shipping Week.

Brexit was not far away when the government hosted an event for the maritime community as part of London International Shipping Week.