Iran-linked Young Yong, which was sanctioned by the US, is the latest tanker signalling that it has reflagged in Barbados after being kicked out of Djibouti 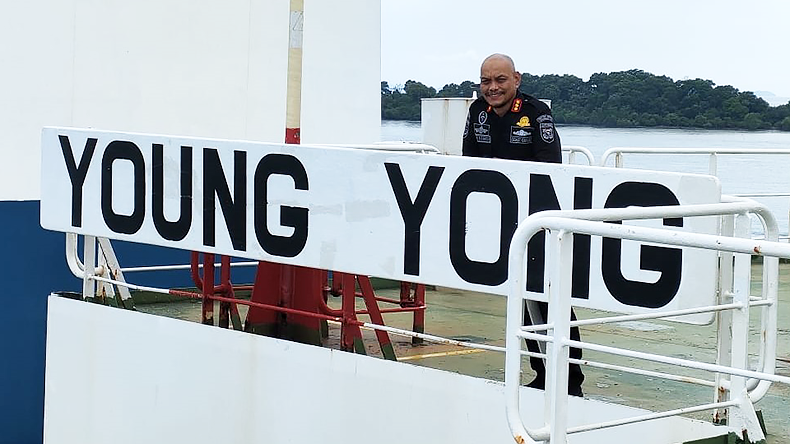 Source: Jon Kenedi The very large crude carrier Young Yong grounded off Indonesia in October of the past year. The vessel was then sanctioned by the US.

Five tankers from the so-called dark fleet have reflagged to the island’s registry, including the infamous very large crude carrier formerly known as Young Yong, which switched after being kicked out of Djibouti.

VLCC Saint Light (IMO: 9194127), formerly Young Yong, ran aground off Indonesia at the end of October, and was then sanctioned by the US, along with other tankers linked to Ukrainian national Victor Artemov engaged in a Venezuelan and Iran oil smuggling network.

Port authority of Tanjung Balai Karimun, which handled the evacuation process, said it will decide on what to do with the oil on board once it gets the clarity on the cargo origin

The tanker switched to the Barbados registry this month, according to data from Lloyd’s List Intelligence, joining two aframax and one panamax tankers with anonymous shelf companies as registered owners that have joined Barbados over the past nine months with links to sanctioned trading.

The provenance of a fifth, much smaller tanker flagged with Barbados is uncertain. The 3,285 dwt Alpine’s (IMO: 9667382) registered owner is Jiangsu Provincial Trade Corp, according to Lloyd’s List Intelligence, which has it built in 2019. The Equasis database has the tanker launched in 2022 and the owner as AAA Maritime Shipping SA, based in Sharja in the United Arab Emirates.

The Barbados flag registry has been approached for comment.

Barbados is among a dozen smaller registries targeted by the so-called dark fleet, which has grown to 300-plus vessels now deployed in sanctioned oil trades shipping more than 2m barrels per day of crude from Iran, Venezuela and Russia.

They take their name from switching off their automatic identification system transponders that transmit heir location in order to hide movements related to loading and transferring sanctioned oil, a practice known as ‘going dark.’

Fleet consists of more than 500 tankers over 34,000 dwt, defined owned by national fleets of Iran, Russia or Venezuela or anonymously owned and engaged in sanctioned trades

The second aframax, Road (IMO: 9229362), along with panamax tanker Parine (IMO: 9257503), was formerly owned by US-sanctioned, India-based Peridot Ship Management until April 2022, when both changed names and ownership. The new owner of these two vessels is based in Amjan in the United Arab Emirates and is called Al Anchor Ship Management FZE. Both vessels have been reflagged to Barbados from Djibouti.

Peridot Ship Management was sanctioned in February 2022 as part of Peridot Shipping & Trading, and was said by the US Office of Foreign Assets Control to be connected to an individual called Chiranjeev Kumar Singh.

Despite increased US pressure on Iran, the number of barrels exported by the Islamic Republic and the shadow fleet carrying them have risen

Mr Singh, who is also linked to UAE-based Aurum Ship Management, was accused by the US of selling and shipping Iranian crude. He has owned several other sanctioned ships, which have since been reflagged to other registries, including Cameroon.

Both Road and Parine have gaps in their automatic identification system signals in areas known for ship-to-ship transfers of Iranian crude, with the former vessel also spoofing its location in mid-November.

These deceptive shipping practices, along with flag-hopping and numerous vessel and ownership changes, are hallmarks of the dark fleet.