Chess theorists have spent the past century agonising over whether white enjoys an edge. But at elite level, white wins 52% of the time

The transition to net zero needs the emergence of a Field of Dreams’ factor. If you build methanol-bunkering terminals, will they come? 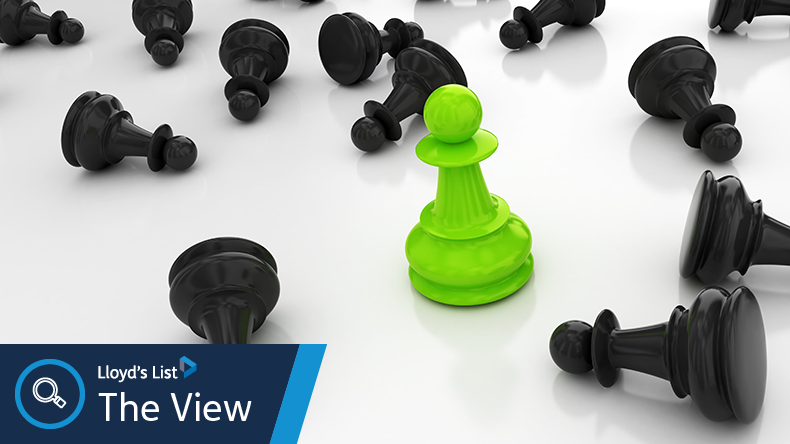 Source: Jezper / Alamy Stock Photo Cargill will be hoping to demystify the task of formulating strategy for the disruptive phase-out of fossil fuels, and thereby get ahead of the curve.

Those nerdy enough to fret about such things have been agonising over the idea for more than a century.

The controversy dates back to 1889, when splendidly hipster-bearded world champion Wilhelm Steinitz postulated that given perfect play by both sides, all games of chess should end in a draw.

Not so, others insisted. Ukrainian grandmaster Vsevolod Rauzer — beloved of chess geeks for his contributions to the aggressive if unfashionable Richter-Rauzer Attack variation of the Sicilian Defence — countered that white has a winning edge after 1. e4.

Initial plans to lead with up to six orders have been scaled back, but Cargill ocean transportation president Jan Dieleman says scaled zero-carbon orders must be made, not just talked about

Mr Rauzer may have been on to something. Allocated colour makes no difference for ordinary players, for whom the perfect play assumption can safely be junked. But at élite level, white wins 52% of the time in games with decisive outcomes.

First-mover advantage, then, seems to be a real thing, if hardly a guarantee of success. And it is something on which trading house Cargill will be hoping to capitalise, after ordering the world’s first methanol dual-fuelled bulk carriers.

An order for an initial series of two kamsarmaxes was signed with Japan’s Tsuneishi yard last month. The first of the sisters will be coming down the slipway by the end of 2025.

Cargill is paying around 15% more than the going rate for a couple of ordinary kamsarmaxes, which must be an unwelcome financial disincentive for being out of the trap early.

In return for that premium, the company will be hoping to demystify the task of formulating strategy for the massively painful and disruptive phase-out of fossil fuels, and thereby get ahead of the curve. That will be worth the extra money.

Moreover, if the ships are deployed on trades within the European Emission Trading System, where carbon pricing is already factored in, and customers ready to pay slightly higher rates in return for green street credibility can be found, the economics should stack up.

The real gamble is the extent of future methanol supply. Indeed, jitters over availability seems to represent the number one deterrent for shipowners in the dry bulk niche.

Of all vessels ordered last year, almost one in ten are being built to run on liquefied natural gas. That compares with little more than 1% that will be methanol-powered, the overwhelming majority of them boxships.

Signing that contract with Tsuneishi must have taken some courage. The least that can be said is that Cargill’s order is unlikely to prove the cheapest deal anyone will strike.

But if methanol dual-fuel bulkers do constitute a viable proposition, others will take note, and newbuilding prices will surely fall.

The point is that Cargill has been brave enough to back up the green rhetoric pervading shipping circles with a firm order for a pioneering ship type. In so doing, it may just have created a tipping point.

In the container segment, Maersk is leading the way in the drive to make methanol one of the shipping fuels of the future. The Danes have tried to solve the chicken-and-egg dilemma by investing heavily in methanol suppliers.

The company has now signed 10 supply agreements to provide fuel for the 19 methanol-powered ships it has on order.

Cargill has already held discussions with Maersk over supply, and as one of the powerhouses of global agribusiness, it could even source its own supply.

The point is that the zero-carbon transition for bulkers and tankers — arguably real shipping industry, where small private owners slug it out in a fragmented market — is an acid test.

What is needed is the emergence of a Field of Dreams’ factor. If you build methanol bunkering terminals, will they come?

Once owners believe that the infrastructure will be in place, they are more likely to garner the confidence to order replacement tonnage accordingly.

By then, Cargill will be the established leader in the technology. If the late Vsevolod Rauzer was right to posit the existence of first-mover advantage at all, Cargill deserves to accrue it.