Regulation: 2023 will be an agenda-setting year for shipping

The IMO’s revised climate ambitions, the roll-out of CII and the details of what emerges from the European Union’s emissions regulations will be the headline regulatory issues for 2023

With only a couple of inter-sessional working groups between now and the July 2023 deadline, propelling the notoriously glacial pace of change within the IMO is going to be an uphill struggle — but what emerges will set the regulatory landscape for shipping’s future 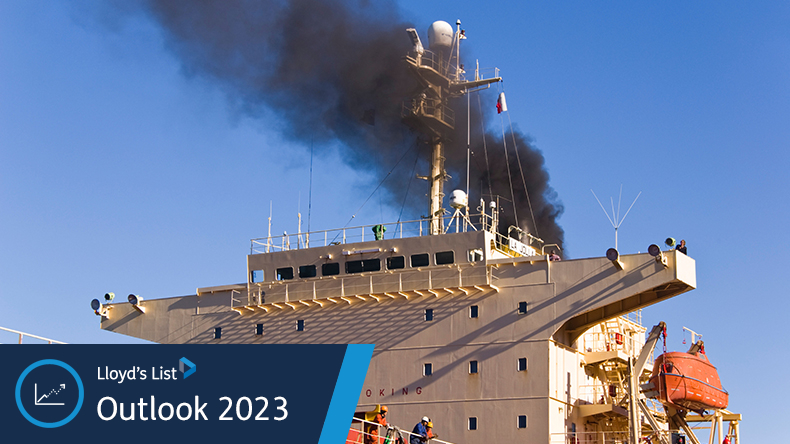 Source: John Rendle NZ/Alamy Stock Photo The current schedule at the IMO requires a revision of the existing paltry climate ambitions to reduce greenhouse gas emissions by 50% by 2050.

REGULATORY uncertainty was surpassed only by the looming prospect of a global recession in this year’s Lloyd’s List poll of risks shaping shipping strategy.

The fact that one third of Lloyd’s List subscribers remain unclear on what lies ahead is inevitable, given the current geopolitical divisions that have continued to hamper progress at a supranational level on climate change.

However, 2023 promises to be a pivotal year in shipping’s regulatory landscape.

The current schedule at the International Maritime Organization requires a revision of the existing paltry climate ambitions to reduce greenhouse gas emissions by 50% by 2050.

Yet with only a couple of intersessional working groups between now and the July 2023 deadline, propelling the notoriously glacial pace of change within the IMO is going to be an uphill struggle.

Based on the signals issued during December’s Marine Environment Protection Committee, an optimist’s reading of the current demographics suggests a majority support among countries to decarbonise shipping by 2050 — and to set interim emission-reduction targets for 2030 and 2040.

However, the devil resides within the detail at the IMO — and, given that the real power in this debate is found within the lower-profile intersessional working groups, the MEPC plenary floor is not always the most accurate litmus test of progress.

Politics aside, it is clear that the only way to decarbonise shipping in line with the Intergovernmental Panel on Climate Change science and 1.5°C pathway is by halving emissions by 2030 and reaching zero by 2040.

Yet politics cannot be put aside within a political body, so the end result will inevitably be a compromise of some description.

The details of what that ultimate ‘zero’ for shipping actually means matter a great deal. It is vital that the proposals work — and to secure that aim, they must be more than a leaky offsetting exercise.

Most people assume that the aviation industry’s equivalent promise to hit net zero by 2050 will be little more than an imperative to plant more trees.

Shipping has to go one better — especially because what follows the ambition will determine whether measures like carbon pricing and a market-based mechanism, be it a levy or a trading scheme, will ultimately work.

Unless you have a 1.5°C-aligned set of numbers in the revision to be agreed in 2023 — particularly in the level of the ambition — then the IMO may well adopt carbon pricing, but it will adopt it without the stringency that businesses need to justify investment.

The focus, therefore, is not on the eventual zero pledges for 2050 in the increased ambition, but the policies that start to cut emissions before 2030 and lock in longer-term investments required to make rapidly significant reductions in the 2030s and 2040s.

The Carbon Intensity Indicator rules — which will also dominate regulatory discussions in 2023 as implementation kicks in — are a step in the right direction. Yet many commentators are hurling brickbats at CII precisely because the underlying agreements at the IMO are so weak.

The danger is that shipowners will view CII as just another tedious box-ticking compliance exercise, rather than a meaningful tool to improve the efficiency of their fleets.

The need is for implementation, not circumvention — but the enforcement of the rules will be the big open question of 2023.

Enforcement of CII will be left to recognised organisations to carry out on behalf of flag states, with most shipowners aiming for the midpoint ‘C’ score in the ‘A to E’ rating system it imposes on ships.

Criticism of the flawed methodology has become increasingly vociferous over recent months and that is a trend that will only carry over into 2023, given that — as one shipowner representative body recently confided in its members — “many of them are not entirely sure what it is they have to do”.

At the very least, the clamour for an IMO update to address the teething issues will be a focal point for 2023.

Yet there is a growing consensus within the industry that the rules need clearer enforcement mechanisms, such as a specific consequence for vessels that fail to comply after implementing a plan of corrective action.

Outside of the IMO, however, the big regulatory focus for 2023 will be the detail that emerges from the European Union.

The EU, of course, struck a preliminary deal in 2022 to include shipping in its Emissions Trading System, beginning with 2024 emissions — but the specifics will matter in 2023.

As it stands, this deal would cover roughly 90m tonnes of greenhouse gases from ships if applied today and will include half of the emissions from all international voyages to and from the European Economic Area.

This marks the most aggressive measure against maritime GHG emissions while breaking two long-held taboos: regional control over some international emissions; and, essentially, the taxation of international shipping.

The positive point to be considered here is that this once unthinkable action within the EU could be the catalyst that finally shifts the global debate into action in 2023.

As one of the key architects of the plan told Lloyd’s List in a recent Outlook Forum: “The hope is that it will demonstrate very clearly that carbon pricing in shipping can work.”

Action at the EU level does not preclude progress at an IMO level — and, based on discussions that have happened in December, there is now strong evidence emerging that a convergence of EU strategy towards a global levy might be sufficient to forge a lasting international solution.

It will not happen in 2023, but even hardened sceptics within the industry who have consistently argued that progress would be impossible are now, in December 2022, finally conceding that a global market-based mechanism under the auspices of the IMO might, possibly, just about be feasible within the next few years.

This article is part of Lloyd's List’s shipping outlook for 2023. Click here to view the full report