Correctly carried out, the Carbon Intensity Indicator could have a profound effect. But if it is merely regarded as just one more bureaucratic hurdle to jump, its impact will be minimal

If matters degenerate into a crazy free-for-all where each shipowner does the best for themselves individually, the industry seems collectively bound to reach the worst possible outcome, as if trapped in some real-world version of game theory’s famous prisoners’ dilemma 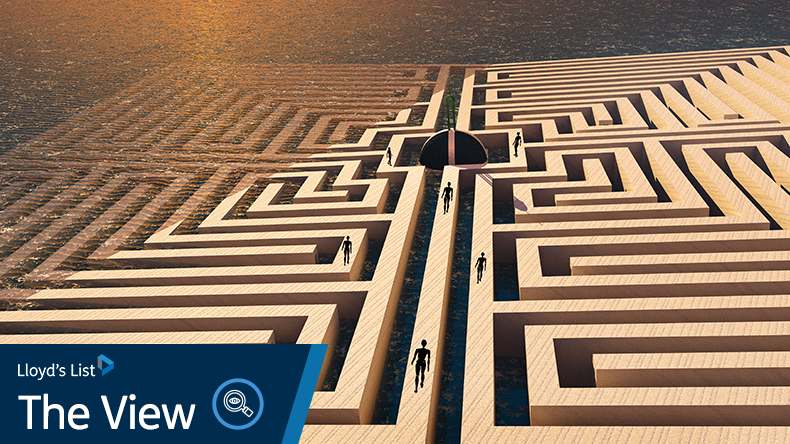 Source: MasPix / Alamy Stock Photo The Carbon Intensity Indicator takes effect on January 1, but it will not work on a level playing field if some ship operators decide to game the system and put themselves to advantage against competitors.

THE road to shipping-regulation hell is paved with good intentions executed badly.

Nobody set out to legislate for scrubbers. The avowed goal of IMO 2020 was simply to reduce the amount of sulphur pumped into the atmosphere. But scrubbers were the unintended side effect.

We will probably witness a similar degree of legerdemain when the Carbon Intensity Indicator starts on January 1.

Lloyd’s List has reported how the proposals have been greeted with much huffing and puffing from an industry alarmed by its unsound metrics and half-baked assumptions.

Let’s say the quiet part out loud; CII is flawed. And it is flawed because it has been enacted with intrinsic design flaws. As the software developer community might put it, these are not bugs, they are features.

The current weak targets for emissions reduction in the International Maritime Organization strategy — which are set to be junked in short order anyway, given that the stated goal of halving emissions by 2050 was always simply untenable — are a major problem.

As things stand, the proposed methodology could lead to situations in which a vessel’s rating would worsen simply because it spends more time in port, or because it speeds up to avoid pirates.

Whether anyone is base enough to game the system entirely by running empty ships to improve vessel rating remains to be seen. But frankly, such tactics are not below the demonstrable moral standards of some operators.

If matters degenerate into a crazy free-for-all where each shipowner does the best for themselves individually, the industry seems collectively bound to reach the worst possible outcome, as if trapped in some real-world version of game theory’s famous prisoners’ dilemma.

The biggest problem, however, will be enforcement. Any ship failing to make the grade will be required to adopt an improvement plan. But little thought appears to have been given to how the said improvement plans can be monitored and made to stick.

While such headaches are probably fixable, everything comes down to the fundamental questions about how willing governments are to effectuate the new rules, and how willing the industry really is to make the necessary changes.

For all its shortcomings, CII is the first major attempt to ensure that greenhouse gas emissions really are curbed over time. What is often missed is the ratchet effect; the rules will tighten progressively, in line with the IMO’s emissions reduction trajectory.

What may look like milquetoast measures right now will not be so easy to dismiss come 2026, especially if the attendees at the next two sessions of the Marine Environment Protection Committee come up with more robust targets.

Dry bulk players agree that the system of Carbon Intensity Indicator standards is not perfect. There will be gaps in the way these standards are applied that mean lower-rated ships will not penalised, simply because of the nature of certain trade flows

Correctly carried out, CII could have a profound effect. But if it is merely regarded as just one more bureaucratic hurdle to jump, its impact will be minimal.

The IMO’s review mechanism will allow member states a degree of flexibility, but the question is whether shipowners are going to approach this exercise as a humdrum compliance exercise, or buy into the spirit of the thing.

The time has come to stop the hunt for easy-life loopholes and start matching that fine rhetoric you have been spouting about the future of zero-carbon shipping with actions that prove you are taking CII seriously.

Don’t look for workarounds, try to make it work.

Make a CII plan before it is too late, LR warns