The next two sessions of the MEPC are expected to up industry climate change reduction goals to net zero by 2050. The UN’s shipping agency must deliver a convincing blueprint

When it comes to climate change, shipping cannot be reduced to the roles of the hapless tramp protagonists of Samuel Beckett’s absurdist masterpiece. Rather than hanging around in the hope that Godot will turn up, we need to go out and find him 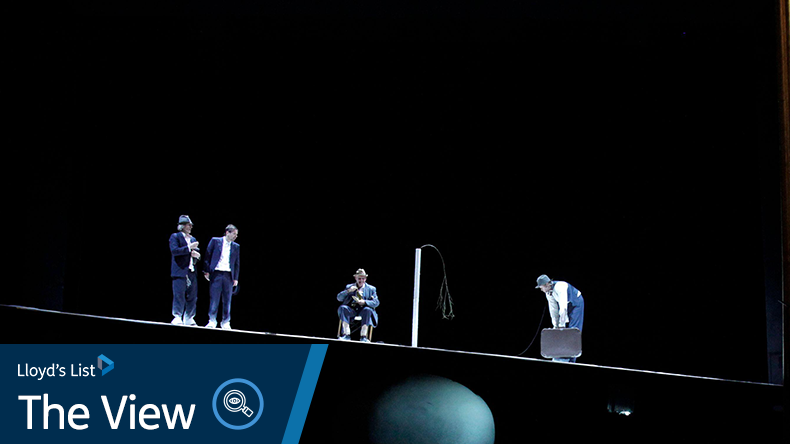 AN IRISH reviewer’s brutal encapsulation of Samuel Beckett’s Waiting for Godot as ‘the play where nothing happens, twice’ is easily the most famous one-liner in theatre criticism history.

To be fair, IMO’s original 2018 proposals to reduce greenhouse gas emissions from vessels by 50% by 2050, on a 2008 baseline, did not quite qualify as an allegory for the absurdity of humanity’s existence in a meaningless universe.

But to be blunt, they were always an untenable display of timidity. Nothing happened; emissions continued to rise. In the end, the pressure to get more ambitious could no longer be resisted.

Attention now turns to what IMO can deliver at the next two sessions of its Marine Environment Protection Committee. Between here and June next year, the expectation is that the target will be upped to zero by 2050.

The only real question for those following the debate is, how come it took us so long to get there?

Even in the past four years, the scale of the climate emergency has grown immensely. The chances of holding down increased temperatures to 1.5°C are melting as rapidly than Switzerland’s much-diminished remaining glaciers.

It is rare that any industry positively demands further and faster action than its regulators. But big-name shipowners themselves are at the forefront the clamour tougher controls.

The recent COP27 climate summit in the agreeable Egyptian beach resort of Sharm El-Sheikh failed to come through with plans that match the gravity of the crisis.

But the more positive news is that it just might have removed some of the hurdles to change at IMO, which as even its defenders will concede can often be a bureaucratic and slow-moving body.

In particular, the calculation is that steps towards a global carbon price for shipping can now be agreed sooner rather than later. That’s a good thing, because the longer we wait, the more expensive it gets.

Key to getting a deal is COP27’s tentative agreement to a ‘loss and damage’ fund, that will see rich nations compensate emerging economies for the consequences of emissions past.

Such a sweetener should suffice to ensure third world flag states with outsized clout at Albert Embankment are incentivised to agree a quid pro quo.

And to be fair, if you lived in a country that will likely be submerged by rising sea levels in little more than a decade, you would probably take a hardball negotiating position too.

The details of what net zero for shipping actually means matter a great deal. It is vital that the proposals work, and to secure that aim, they have to be more than a leaky offsetting exercise.

Most people assume that aviation’s equivalent promise to hit net zero by 2050 will be little more than an imperative to plant more trees. Shipping has to go one better.

The Carbon Intensity Indicator rules a step in the right direction. But many commentators are hurling brickbats at CII precisely because the underlying agreements at the IMO are so weak.

The danger is that shipowners will view CII as just another tedious box-ticking compliance exercise, rather than a meaningful tool to improve the efficiency of their fleets. The need is for implementation, not circumvention.

A lot of shipping corporates have issued fine-sounding net zero plans, and hurrah for that. But far too few contain the required detail to assess whether they represent progress, or simply greenwashed promises on the never-never.

All eyes are now on the IMO, which after all represents the collective will of its 175 member state governments.

But when it comes to climate change, shipping cannot be reduced to the roles of Vladimir and Estragon, the hapless tramp protagonists of Beckett’s absurdist masterpiece.

Our accountability is not tied to the IMO alone. Like all industries, we are responsible to the planet as well.

Rather than hanging around in the hope that Godot will eventually turn up, we need to go out and find him.

Why waiting for progress at IMO is a very risky strategy

COP27: It’s time for IMO to deliver on shipping decarbonisation

IMO to develop safety guidelines for ammonia and hydrogen