The European Commission has truly usurped the International Maritime Organization to become the most influential policy-making body in the shipping industry in 2022, showing the world how to set legally binding targets to reduce maritime greenhouse gas emissions

The nature of the regulatory debate within shipping is reaching an inflection point when it comes to emissions, but the injection of hugely complex and fluid sanctions has had a notable impact on the industry in 2022 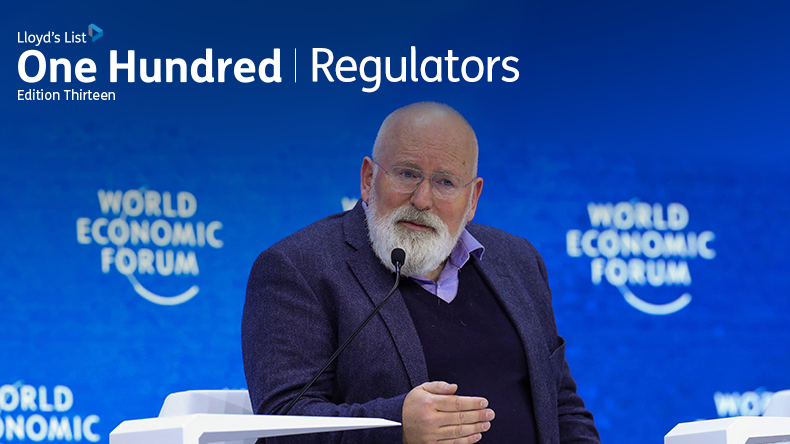 Source: Xinhua/Alamy Stock Photo Timmermans: the face of an historic shift in regulatory politics for shipping.

International shipping is about to feel the impact of the European Commission’s climate ambitions for the sector. After years of talk, 2023 looks like it will be the year in which the EU agrees on the regulations for shipping emissions that the Commission has proposed.

Shipping will be included in the Emissions Trading System in some form and owners will soon have to comply with new fuel standards that will force a switch to low-carbon fuels.

These will likely not just concern European shipping and European voyages, however, as some part of international voyages may be included too.

The Commission’s decisions on ships carrying fossil fuels being excluded from the sustainable finance taxonomy will also have large implications for financing in the sector over the coming years.

Frans Timmermans cannot take the credit for all of this, but as the executive vice-president leading the Commission’s work on the European Green Deal and its first European Climate Law to enshrine the 2050 climate-neutrality target into EU law, he is very much the face of this historic shift in regulatory politics for shipping.

The International Maritime Organization secretary-general has little over a year to implement his vision. The jostling for position in the upcoming IMO elections has already begun and 2023 will be Kitack Lim’s final year at the helm.

Mr Lim and the IMO have seen successes, such as the 2020 global sulphur cap and the adoption of the international greenhouse gas strategy in 2018.

However, they have also endured scrutiny and criticism for not taking fast or meaningful enough action to curb emissions while the rest of the world tries to do so. In 2022, certainly, the EU’s action has rather overshadowed the glacial pace of change at Albert Embankment.

There is still time to secure a last legacy, though. 2022 has set the stage for the crucial Marine Environment Protection Committee meeting in July 2023, when governments will revise the strategy and set new emissions targets for the industry.

Some form of zero-emissions pledge by 2050 is likely to be the headline, but the detailed agreements towards 2030 and 2040 will be the metrics by which success is measured.

Without progress here, the key carbon pricing and market-based mechanism debates that follow will potentially be meaningless.

For the world's largest shipowners' association, which represents more than 80% of the global merchant fleet, 2022 was an important year.

It formally elected Emanuele Grimaldi as its new chairman, taking over from Esben Poulsson, who had held the position since 2016.

It was, in certain ways, also a challenging year for the association. Maersk — one of the most outspoken shipping companies on climate policy — left the ICS over differences on this issue.

Meanwhile, the IMO rejected the high-profile research and development fund that the ICS, other industry bodies and governments had been championing, after a couple of years of deliberations.

However, with chief executive Guy Platten at the helm, the organisation is maintaining its position as the leading industry voice on the international policy-making stage.

Late in 2022, the ICS tabled a new proposal on a carbon-levy structure that would benefit those shipowners using low-emissions fuels.

The ICS also deserves credit for advancing some very productive conversations at a ministerial level around the creation of marine clean-energy hubs that have the makings of a serious industry venture, capable of delivering tangible progress on emissions reduction.

In other years, this would be an entry for the broad-base alliance of green non-governmental organisations, but this year a special mention is required for the Brussels-based NGO Transport & Environment, which has arguably become the single-most important environmental organisation in maritime.

It has played a major role in the formation of the shipping elements included in the European Commission's Fit for 55 package, the Emissions Trading System agreements, EU alternative fuels regulation — the list goes on, and on.

It has done this through engagement with policymakers and industry to secure an ambitious set of measures for the sector — and it has done more to achieve political consensus than almost any other individual body in 2022. As an industry influencer, T&E is making things happen.

The evolution of the Global Maritime Forum from executives talking shop to cross-industry agents of progressive change has been one of the defining changes in the industry over recent years.

The GMF is by no means the only body currently seeking to coalesce industry efforts into action, but it has become a very effective standard-bearer for the progressive coalition of the willing at the top of the industry.

The succession of spin-off initiatives like the Poseidon Principles and Sea Cargo Charter have become the focal point for first-mover change, willing progress through their members’ combined vision and commercial heft.

Unencumbered by the restrictive requirement of consensus agreements in more traditional membership bodies, they achieve headlines and generate debate easily — even if the slower progress elsewhere is more inclusive.

The idea that progress happens when people from all parts of a system come together to discuss challenges and work together on finding new solutions is a positive step forward for shipping that deserves much wider engagement.

Reducing the annual output of BIMCO to a few lines is always going to fail to capture the significant influence that the world’s largest shipping association has on the direction of the industry.

This is a body with reach and globally respected expertise that quietly works away in the background very efficiently. BIMCO’s long-awaited time-charter clause to deal with the new Carbon Intensity Indicator finally emerged in November 2022 after eight months of complex deliberation.

The significance of that work should not be underestimated, given the likely slew of legal fights expected to break out in 2023 when the problematic details of CII start causing real world issues.

After serving as the interim secretary-general in 2021, Sotiris Raptis formally became the permanent leader — a logical evolution for the organisation, considering he has been leading the Fit for 55 regulatory package negotiations for European shipowners.

Under his tenure at ECSA, Mr Raptis has become a formidable stakeholder in the EU’s climate negotiations.

ECSA has maintained a proactive approach to negotiations with the EU, adopting clear and consistent positions while working with environmental NGOs — a relationship that may have been seen as unnatural just a few years ago.

Mr Raptis and ECSA have been pushing for the revenues from shipping’s impending inclusion in the EU ETS to be kept within the sector and for FuelEU Maritime regulations to be fair for the shipowners in terms of the responsibilities they put on them versus those of fuel suppliers.

Li Guoping has spent a long career working at maritime authorities in different parts of China.

The 60-year-old is now the head of China’s Maritime Safety Administration, as well as the security chief at the Ministry of Transport in Beijing.

Representing China, one of the world’s largest flag and port states, he and his team will play a crucial role in implementing the IMO’s emissions-reduction rules that will take effect imminently.

The MSA recently published its rulebook for the management of ship energy consumption and carbon intensity, effective from December 2022 and applicable to merchant ships calling at the country’s ports.

It has detailed the measures used for ships to report their fuel-consumption data and for local maritime regulators to collect the information and rate the performance based on the IMO’s requirements.

Economic measures to cut Russia off from the world’s financial arteries are the most extensive seen since the Second World War.

They are also increasingly complex and being staged across multiple jurisdictions, each with their own minefields of compliance that has continued to expand over the year.

While the US Treasury’s Office of Foreign Assets Control, the UK’s Office of Financial Sanctions Implementation and the EU’s sanctions departments are all pointing in the same direction, the specific restrictions from each body are fluid and evolving.

As this list readies for publication, all eyes are on the tanker markets from December 5, 2022, when the EU sanctions on seaborne crude kick off.

The seismic impact that these changes have had on redrawing trade lanes is already huge — but there is much more yet to come. As one tanker owner put it recently: the energy world’s “tectonic plates are moving and it’s not temporary".

10 / Daniel Maffei and Rebecca Dye, US Federal Maritime Commission
The passing of the Ocean Shipping Reform Act 2022 has, finally, given the Commissioners the teeth they had been seeking for some time — and they have certainly been more visible in the industry as a result.
A more combative Commissoner Daniel Maffei also emerged, threatening to step in to force carriers to evacuate empties from New York as terminal and intermodal congestion on the US east coast worsened in 2022.
In its latest volley, the FMC has called for public comment on whether congestion has created conditions warranting an emergency order that would see carriers and terminals forced to share information with shippers, truckers and rail operators.
Even as the worst of the congestion begins to ease, it is unlikely that the Commissioners, having won the power to make changes, will step back into the regulatory shadows.