Most tankers are anonymously owned, with the insurance provider for oil spills and other liabilities also unknown

Two tankers sanctioned in recent days by the US were involved in casualties off Singapore in the past six weeks and formed part of the armada off Malaysia used for floating storage and ship-to-ship transfers of Iranian, Venezuelan and now Russian oil

Source: Humberto Olarte Cupas / Alamy Stock Photo The tankers are used for floating storage until the cargoes find a buyer or undertake transfers of oil for shuttle voyages to China.

A TOTAL of 43 large tankers with an average age of 20 years, all engaged in deceptive practices linked with shipping sanctioned crude, were at anchor off the eastern coast of Malaysia in the past week, amplifying marine casualty risks near one of the world’s crucial oil trade arteries.

There have been two casualties in the past six weeks off Singapore, involving elderly tankers that have been at anchor in the area and identified as shipping US-sanctioned Iranian and Venezuelan oil trades.

The 43 anchoring tankers are part of a seaborne logistics base for Iranian, Venezuelan and now Russia crude, and form a well-established network that has evolved over the past three years to evade sanctions.

The tankers are used for floating storage until the cargoes find a buyer or undertake transfers of oil for shuttle voyages to China. They are based in outer port areas off southeast Malaysia outside territorial waters. 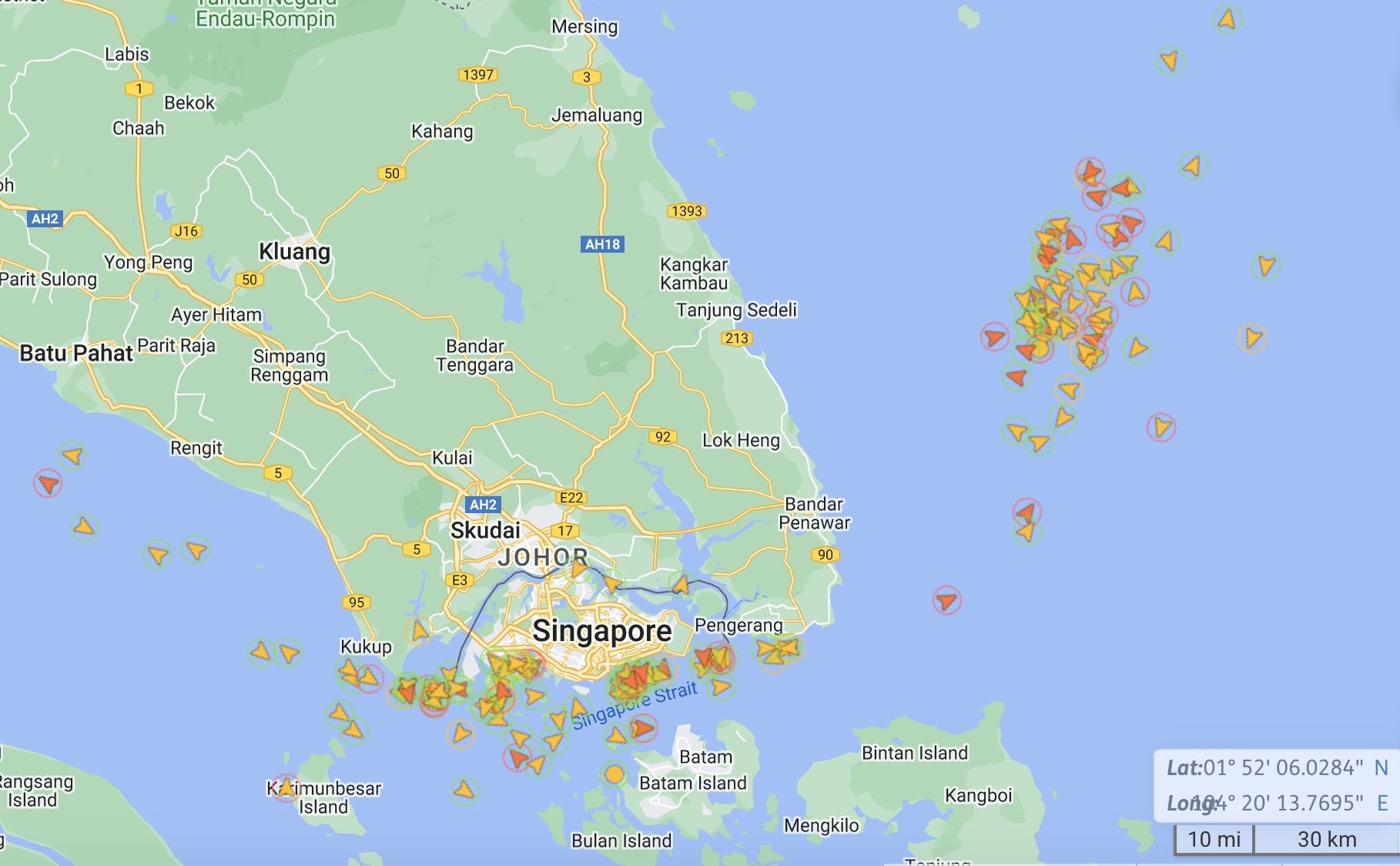 There are 29 very large crude carriers, seven suezmax tankers and a further seven aframax vessels tracked there, according to analysis undertaken by Lloyd’s List, using Lloyd’s List Intelligence data. The analysis counted vessels over 70,000 dwt only.

Six are owned by Iran’s national tanker shipping company NITC and sanctioned by the US. For all but a handful, the beneficial owner is unknown as anonymous single-company structures are used to obfuscate corporate liability.

Of the 43 tankers, 25 are not entered with the 13 International Group P&I Clubs that provide cover for 95% of the global tanker fleet, further clouding responsibility for covering any cost for oil pollution or bunker spills in the event of an accident. Those for which insurance is provided by the International Group can be tracked to Russian cargoes, for which there are currently no sanctions.

The US administration has blacklisted the laden, Dijibouti-flagged Young Yong (IMO: 9194127), a 2001-built VLCC that ran aground on October 31 as it moved around the anchorages from Malaysia and Singapore.

The Palau-flagged Zephyr I (IMO: 9255880), an aframax tanker that collided with a Maersk containership off Malaysia in late September, was also sanctioned.

The tankers were part of 11 designated by the US Office of Foreign Assets Control for shipping Iranian oil that was blended with Indian products from the United Arab Emirates port of Sharjah as part of a sanctions-evasion network.

A fleet of about 220 tankers, all anonymously owned, has evolved to ship about 1.5m barrels per day of US-sanctioned Iranian and Venezuelan oil without penalty over the past three years, providing a template for Russia ahead of the pending introduction of European sanctions from December.

The tankers use deceptive shipping practices that include switching off vessel-tracking transponders. There is frequent changing of flags and ownership structures. There are also ship-to-ship transfers across the logistics chain to disguise the destination and origin of cargoes.

The template is now being used by Russia, with at least eight laden tankers off Malaysia’s east coast tracked to Russian trades or connected to tankers that have been involved in ship-to-ship transfers of oil or crude from the federation.

Tankers are older because they are cheaper to buy and because most oil majors will not charter vessels older than 15 years, with the lack of insurance and poor technical oversight fuelling safety risks.

Twenty-four of the tankers are flagged with Panama, two with Sao Tome & Principe, three with Liberia, three with Cameroon and five with Iran.

Tankers ship crude to ports in China, the biggest buyer of Iranian and Venezuelan crude.

VLCC runs aground near gas pipeline off Singapore Strait