Ukraine’s small river ports have become an important component of the country’s supply chain during the military activity, but capacity is maxed out 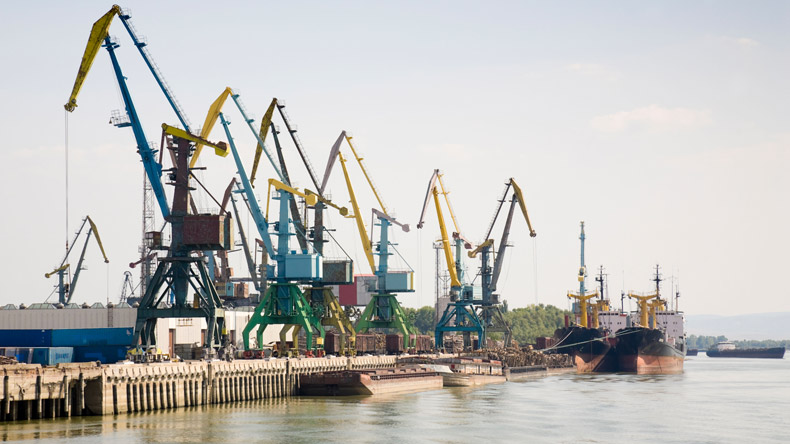 RIVER Danube ports in Ukraine are operating at capacity, with limited ability increase their workload to handle cargoes currently being managed by the greater Odesa ports under the Black Sea Grain Initiative.

Russia has withdrawn from grain deal activities weeks before the agreement is set to expire in response to drone attacks on its navy.

Discussions to renew and potentially extend the deal have been ongoing for several weeks, with Russian officials casting doubt on the prospect of a successful outcome.

The Joint Coordination Centre continues to facilitate traffic along the maritime humanitarian corridor, but it is unclear how long this will be sustained.

A total of 16 ships were scheduled to pass along the Black Sea grain corridor on Monday. However, future movements remain uncertain as insurers stall on issuing new cover in the wake of Russia’s decision to exit the initiative

Other than Ukraine’s designated export hubs under the agreement, only its ports along the Danube are operational. These small river ports, mainly Reni, Izmail and Kiliia, have increased their workload to keep goods flowing into and out of the country, but export potential is limited by infrastructure and vessel capacity.

Danube ports are fully booked and are unable to handle the extra volumes spilling over from the grain corridor without further investments in their facilities, said Elena Neroba, analyst at Ukrainian brokerage firm Maxigrain.

It is critical for Ukraine to continue exporting its commodities as farmers need these revenues to purchase inputs, which are resources used in production, for the next harvest.

Ukraine’s ministry of infrastructure is working to improve exports logistics on the Danube, but projects of this nature take time to complete.

A railway line between Ukraine and Moldova is near reopening after being non-operational for more than 20 years, providing a connection between Odesa and the Danube ports. It will enable the movement of 10m tonnes of cargo each year, according to Odesa-based Lloyd’s agent Eurogal.

To ease traffic leading to the river terminals, new parking areas have been built in the Izmail area. Some 4.7 hectares have been completed, with 48 ha more scheduled.

Nibulon, a major Ukrainian agricultural company, has also completed the first stage of construction of a new grain terminal at Izmail, according to Eurogal.

In September, the Danube ports combined exported 1.24m tonnes of agricultural products, as per data published by Ukraine’s ministry of infrastructure.

That represents 18% of Ukraine’s total agricultural exports for the month.

Outbound sailings from Ukraine’s Danube ports to international markets started increasing in April, according to Lloyd’s List Intelligence vessel tracking data. Departures appear to be stabilising in the 200 range.

There has been a sharp uptick in vessels travelling to Bulgaria, Egypt, Greece, Italy, Lebanon, Romania and Türkiye.

It is likely that products are being processed at some of these destinations and then transhipped to other countries.

Investigation unable to detect mine in Ukraine grain corridor