Fears over continued lockdowns in China and geopolitical tensions are driving more companies to diversify their supply chains, where shipping play an important role

Should shipping be concerned about supply chain fragmentation? Or will the increasing efforts of developed countries to emulate China’s industrial policy be the major challenge for seaborne trade? 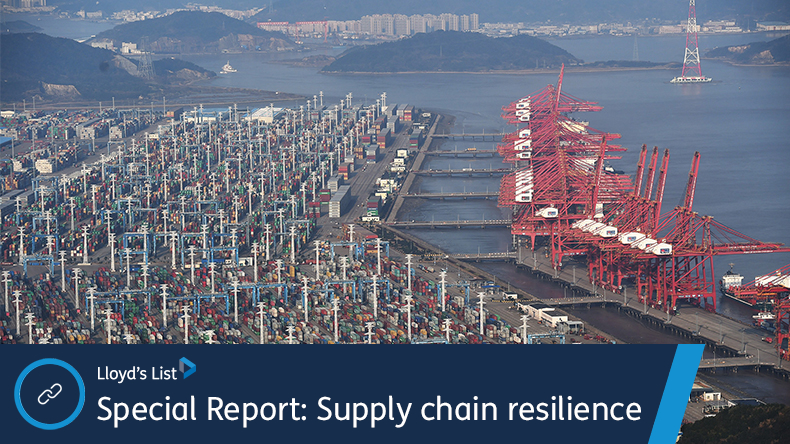 Source: Cosco Shipping Ports The port of Ningbo has been badly disrupted by a Covid outbreak, with blocked roads, closed warehouses and stranded truck drivers.

AN ancient Chinese philosopher once said: “You can’t have fish and bear paw at the same time.”  Put simply, people sometimes have to give up one benefit to gain the other.

The US and its allies are now forcing China to make a choice: either work with us, or without us.

Beijing wants both. It has drawn up an ambitious plan, announced by President Xi Jingping during the recent party congress, aimed at modernising China in its own way.

To further modernise the Middle Kingdom requires continued access to the global market and technologies from the developed world; the Chinese style is a manifestation of the denial of adopting the Western system, from the way it handles the coronavirus pandemic to how it elects its political leader.

One of the results of this paradox, according to some industry experts, is the acceleration of the supply chain reconfiguration, where shipping plays an important role.

The super-strict virus-control rules continue to test the patience of manufacturers in China and their foreign partners.

The European Union Chamber of Commerce said in September that China’s “inflexible and inconsistently implemented” Covid policy was crippling business operations and warned that companies were losing confidence in the country as an investment destination.

Recent news of workers fleeing to their hometowns from the country's largest iPhone factory in Zhengzhou city would have done little to help sway sentiment.

Beijing has doubled down containment efforts amid surging domestic infections in recent weeks.

According to the latest estimate by Normura, 31 Chinese cities were under varying degrees of lockdown, with around 232m people affected in regions covering about nearly a quarter of China's gross domestic product, as of October 27.

The recent Covid outbreak in Ningbo provided yet another stark reminder of how shipping and logistics can fall victim to the heavy-handed measures. With blocked roads, closed warehouses and stranded truck drivers comes disrupted container transport and reduced terminal efficiency.

Companies are no stranger to such disruptions that have occurred numerous times across Chinese cities over the past few years and are now regarded as the 'new normal'.

“In the US, people might feel they have entered the post-pandemic era, but in China, we have never thought so; nor did the party congress send any signals that this will end any time soon,” said a Chinese container shipping executive.

“So, production and exports here will likely be constantly disrupted.”

Flexibility in port calls is a critical requirement for carriers, he said. Many shipping lines are also dispersing equipment into different inland ports from just a few coastal hubs to spread the lockdown risks, despite the cost.

Migration of manufacturing capacity and supply chains has increasingly become an option. A lower labour cost was the largest catalyst. It is now being replaced by the risk of deglobalisation and decoupling, highlighted by the escalated US curbs on Chinese electronic chipmakers.

An EY survey of chief executives earlier this year found 79% of them globally were proactively reconfiguring their operations and supply chains in response to geopolitical and trade tensions.

This figure exceeded 90% when focusing on those in major Asian economies, such as Australia, Japan, China and Singapore.

The China Plus One strategy, which encourages companies to diversify their investments and supply chains outside of China, is prevailing, according to Atul Chandna, who leads EY Asia-Pacific’s supply chain segment. And countries in Southeast Asia appear the largest beneficiaries by far.

Mr Chandna said one of his clients, a consumer goods company, has moved out of Hong Kong and split its operations, establishing Shanghai as its China-for-China hub and Singapore as its headquarters for the rest of the global market.

Another client, a tyre manufacturer, said it was looking for a space almost three times the size of its largest existing factory, in member states of the Association of Southeast Asian Nations.

The firm wants to tap into the fast-growing electric vehicle market, where China has become the world’s largest exporter.

One implication for shipping is that the supply chain shift to the Asean countries will give rise to the development of smaller tier-two ports, which connect the scattered markets in the region crisscrossed with a network of waterways, said Mr Chandna.

“Tier-two ports are probably the answer in future to meet customer demand,” he said.

And, as the supply webs get increasingly stretched from a single world factory to multiple manufacturing hubs, integrated logistics services empowered by technological readiness are gaining traction, he added.

Companies demand trusted end-to-end solutions to help them navigate the increased layers of logistics operations so they can focus on the product and customer experience, he said. “Supply chains are going down that route.”

That is perhaps why more container shipping companies are buying logistics assets to expand their service arsenal.

Yet it is not just the shipping operators that are being pushed towards the avenue of integration.

The jury is out on whether the future will be dominated by carriers that innovate and own the end-to-end value chain, or traditional freight forwarders that digitalise themselves and become the leaders in the new era, said Steve Saxon, a maritime expert at McKinsey.

“Or will it be the new entrants, whether it's digital forwarders or large retailers, that end up dominating?” he said.

Mr Chandna said two of his clients in the retail industry, one in Thailand and another in the Philippines, are seeking EY’s advice on how to set up their respective logistics arms.

“More and more companies are looking at logistics as a spin-off business and a service from an end-to-end provider perspective,” he said.

In China, the ambitious expansion plan by Transfar Shipping, an emerging container shipping line backed and invested in by e-commerce giant Alibaba, has commanded attention.

Rather than an ocean shipping carrier, Transfar positions itself as an integrated end-to-end logistics provider for thousands of Chinese small and medium-sized cross-border e-commerce firms, according to chief operating officer Li Xiaobing.

“That is why, in addition to containers and vessels, we have also invested in shoreside assets, such as trailers, trucks and storage yards, on the US side.”

Transfar is seeking to order five or six methanol dual-fuel boxships, possibly with a capacity of 8,000 teu each, for delivery between 2025-2026.

“We are still in talks with yards about the specific size and design,” said Mr Li.

“We know ship prices are high at the moment, but new orders and ship capacity are the result of great deliberation backed by a growing demand for cross-border e-commerce logistics.”

Mr Li believes online trade between China and the US will continue to grow, despite bilateral tensions. However, he is not turning a blind eye to shifting supply chains, either.

Transfar has started to extend its networks to Southeast Asian ports including Singapore, Jakarta, Ho Chi Minh City and Laem Chabang, he said.

“Especially in Thailand and Vietnam, we can almost ensure a direct service to the US every three weeks.”

The trend of going south from China is continuing to accelerate, said Mr Saxon.

“As different fears arise about China, whether it's further lockdowns because of the continued zero-Covid policy, or whether it's other geopolitical risks, every manufacturer I talked to has got a China-plus-one strategy,” he said.

“Often it is the Chinese manufacturer who is going to set up a factory abroard.”

This bodes well for container shipping as the fragmentation of supply chains are expected to increase cargo demand. with many intermediate goods still being made in China, he further argued.

“You've got a move from China to Vietnam, and you've got final assembly in Vietnam and then it moves to the export market. So, one container movement has now become two.”

The real challenge may lie in the efforts being stepped up by developed consumer countries to bring manufacturing capacities — at least the high-end ones — back home.

The sprawling $280bn bill signed by President Joe Biden to bolster the US chip-making industry has, in fact, revealed a painful irony: Washington is now replicating Beijing’s industrial policy — which it has been slamming — with massive incentives and subsidies.

“When [President] Biden looked at Beijing’s Made in China 2025 strategy, he realised that he could do the same,” said a Hong Kong-based US trade official.

This has become a concern over unfair competition shared by German chancellor Olaf Scholz and French president Emmanuel Macron during their recent lunch meeting in Paris, according to a report from Politico.

Citing anonymous sources, the American, German-owned political newspaper said if the US does not scale back, the EU will have to hit back with similar incentive schemes for companies to regain the ground lost.

However, for now, at least, the sharp correction of freight rates from the pandemic-led apogee are putting a dampener on reshoring or near-shoring initiatives, said Mr Saxon.

“But if rates are at 2019 levels, then the business case doesn’t make sense.”

Global supply chain will be ‘more challenging’ in 2023