Companies in Europe and North America are shunning Russian business, but the country’s commodities are still in demand and the Kremlin is looking at the best ways to keep supplies moving 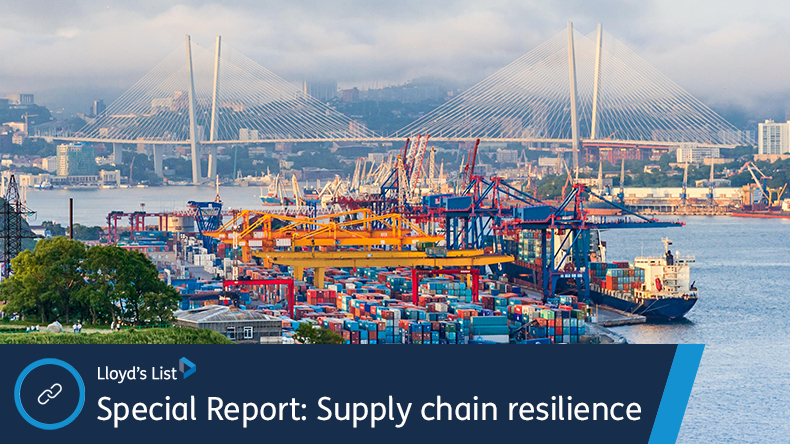 Source: ALAMTX/Alamy Stock Photo Vladivostok (pictured), Vostochny and Nakhodka, some of the busiest ports in Russia’s east, saw double-digit growth in traffic during the third quarter of 2022.

Sanctions levied against Moscow by countries in Europe and North America have forced the Kremlin to find new trade partners to keep cash flowing, but also suppliers to fill the shortfall left by the departure of major Western businesses.

“Our centrepiece is the eastern dimension of our infrastructure and the International North-South Transport Corridor, and the ports of the Sea of Azov and Black Sea,” said Mr Putin in his address at the Eastern Economic Forum in Vladivostok.

“These will provide Russian companies with new opportunities; they will get access to the markets in Iran, India, the Middle East and Africa, and will facilitate supplies from these countries in return.”

Only terminals in Russia’s far eastern ports recorded year-on-year growth in commercial departures during the third quarter of 2022.

Vladivostok, Vostochny and Nakhodka, some of the busiest ports in Russia’s east, saw double-digit growth in traffic, driven largely by general cargoships and tankers.

Containership activity through Russia’s Baltic and Black Sea ports plummeted after major lines like Maersk and CMA CGM decided to cut their services.

From March to September 2022, full teu throughput was down 39% compared to 2021, according to data from consultancy Dynamar.

However, volumes in August and September were higher than in 2021 for Russia’s far eastern ports.

“Overall, it seems that more trade capacity is being put into the market there now — albeit those new services are mostly operated by very small ships. One of the new services is aiming at intermodal connections via Vladivostok to Moscow.”

Increased navigation along the Northern Sea Route is a key component to increasing cargo volumes through Russia’s main ports, said President Putin. The aim is to provide year-round navigation through the Arctic route from 2025.

Journeys via the Northern Sea Route have fallen in 2022, driven by an exodus of foreign shipowners.

From January to September, 58 voyages were completed by merchant ships, compared to 99 in 2021, according to Lloyd’s List Intelligence vessel-tracking data.


Trips by LNG carriers, bulkers and general cargoships dropped, while there was an unusual uptick in containership activity.

The Russian government is the beneficial owner of the vessel, which is operated by Atomflot Federal State Unitary Enterprise. The latter is a Russian company that operates a fleet of nuclear-powered icebreakers.

The other containership to travel the passage, making one trip, was Russian-flagged Monchegorsk (IMO: 9404015).

The vessel is operated by Norilsk Nickel, which is a mining and metallurgical company that owns a terminal in the port of Murmansk.

Containerships made only three voyages through the Northern Sea Route between 2018 and 2020, with none passing through in 2021.

The Kremlin is also promoting the International North-South Transport Corridor as another avenue for trade to reach new markets.

Russia’s Caspian Sea ports are less busy this year than last, recording 551 outbound sailings during the third quarter of 2022 compared to 820 in 2021.

Azerbaijan, however, reported a 24% year-on-year increase in departures during the third quarter. Outbound sailings from its ports grew 40% from January to September compared to the same period in 2021.

Demand for transportation via Azerbaijan along the Trans-Caspian International Trade Route has increased significantly since the invasion of Ukraine, Khudayar Hasanli, head of strategic planning and development department at Baku International Sea Trade Port, told a local news agency.

The route is being used to move cargo from China and central Asia to Europe and back.

The wider Caspian Sea ports cumulatively have not seen an increase in activity post-invasion, but there has been a spike in vessels travelling for periods with their automatic identification systems off in a behaviour called ‘going dark’.

There are several reasons for ships to switch off AIS, including transmission or safety issues, but it is commonly used as a tactic to obfuscate journey origins and destinations, as well as other illicit activity.

AIS gaps in the Caspian Sea totalled 440 in September. This is 37% higher than the number recorded in August, and the most since May 2021.

The spike was driven by Russian and Iranian-flagged tankers and general cargoships.

The increase in AIS correlates with a higher number of what appear to be dark ports calls, where ships are mainly trying to hide journeys to Russia or Iran.

Some 48 voyages of this nature occurred in August, rising to 60 in September.

There are two plausible explanations to the increased volume in AIS gaps, according to Martin Kelly, lead intelligence analyst at EOS Risk Group.

The first is attempts to conceal the illegal transhipment of Iranian oil.

“Oil exports are Iran’s main source of revenue and have been targeted following the breakdown of the Joint Comprehensive Plan of Action,” said Mr Kelly.

“Transporting oil on the high seas in which Western authorities patrol is a huge risk for Iranian exports.”

The Caspian Sea is a much safer option for moving risky cargoes, including weaponry, he said.

Reports from Ukraine indicate that Russia is likely to be using Iranian drones against Ukrainian targets. Further, Iranian officials have confirmed that they will be supplying Russia with two types of ballistic missiles, according to Mr Kelly.

“The shortest route for the missiles to reach Russia, with the largest lift capability, and less chance of seizure, would be via the Caspian Sea,” he said.

The government of Iran, through a private company, recently invested and carried out improvements to Russia’s Caspian Sea port of Astrakhan. The purpose of this was so Iran could find alternative ways of exporting via Russia, according to Yörük Işık, a geopolitical analyst from the Istanbul-based consultancy Bosphorus Observer.

“This has become a key investment because Russia is now using Astrakhan for access to Iranian ports,” said Mr Işık.

Russia’s traditionally busy maritime trade routes in the Black Sea continue to play an important role in moving cargo, but especially in its growing relationship with Türkiye.

Kavkaz Anchorage, located in the Kerch Strait, is a critical area for Russian exports, especially grain. Smaller vessels travel down to the anchorage through the Sea of Azov, where they conduct ship-to-ship transfers with larger vessels, which move the cargo to the next destination.

Departures from the anchorage have been falling throughout the course of the war.

The opposite trend is seen with Türkiye, though. During the second quarter of 2022, the country accepted 203 vessels travelling from this location, up from 99 during the same period in 2021.

During the third quarter, preliminary numbers show this figure grew to 317 ships.

“This increasing trade relation has a deadline,” said Mr Işık.

“Russia is on a very self-destructive path and is not changing its direction on the Ukraine front.

“It is impossible to imagine that Turkish trade in the long term can continue increasing because everything is going to come under sanctions, and everything Türkiye produces in one way or another touches European trade.”

It is difficult to know for certain whether Moscow can maintain or scale up its seaborne trade with “friendly” countries, even if the trade lanes exist for it to do so.

“Geopolitics has a big role to play,” said professor of operations and supply chain management Samir Dani of the Keele Business School.

“There is an alliance against Russia, but there are individual countries that continue to be on good terms and keep up trade relationships.

“At the end of the day, it is about the longevity of the war. Governments change and so do policies, and we do not know what is going to happen.”

Smart sanctions must heed the law of unintended consequences