Lloyd’s List webinar hears how the industry is still some way off the long-predicted innovation tipping point that will overcome the current siloed approach to digitally enabled efficiency, too often blocked by a misalignment of incentives between charterer and owner 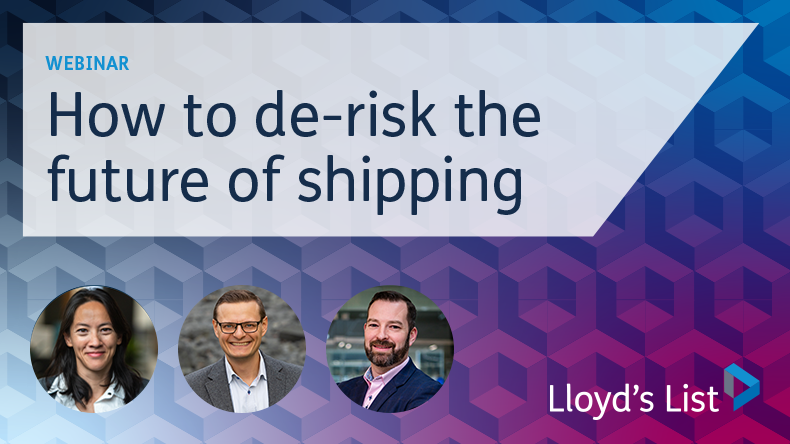 REGULATORY pressure to cut carbon emissions from shipping is accelerating investment in innovation, but digitalisation efforts remain fragmented and a tiered industry divided by means and ambition is emerging.

A lack of technological breakthroughs is not what is blocking progress — the required advances needed lie in scalability, collaboration and overcoming a fundamental misalignment of incentives, argued a panel of industry experts speaking on a Lloyd’s List webinar on Thursday.

“In order for innovation to spread across an industry, you need to reach a certain tipping point and from there everything will move faster,” said Leslie Dang, managing director for Singapore at the artificial intelligence specialist Nautilus Labs.

“Right now, everyone is still looking at the early adopters and is more focused on aspects like pricing, rather than looking at what innovation is going to bring to them.”

But in order for innovation to be adopted, it is not just a question of technology, Ms Dang argued.

“Digital transformation is 10% digital and 90% transformation. Ultimately it comes down to change management. You cannot expect shipping businesses change the way they have operated for centuries overnight, but you can walk the path with them,” Ms Dang said.

The industry, however, is increasingly separating into a tiered demographic of digital haves and have nots. Smaller companies tend to struggle with new digital initiatives and while scale of operations is no longer the determining factor it once was when it comes to digitalisation projects, the uptake and investment into digital efficiency tools remains heavily skewed to a small selection of early adopters. More often than not, these tend to be larger companies.

According to Osku Kälkäjä, head of digital business at ABB Marine & Ports, many of the larger companies are using increasingly sophisticated data collection tools and seem quite comfortable in adopting machine learning and AI into their systems, but smaller companies, representing 65%-70% of the industry, are still struggling to adapt.

Shipping is arguably dividing into tiers based on the means and ambition, however the panel debated whether a reason for this division stems from a lack of awareness of all the available technological possibilities. Mr Kälkäjä conceded that it was a responsibility of suppliers to make digitalisation more understandable to all shipowners, regardless of size and domain experience.

Cost is also still often cited as a blocker, particularly for the 70% of the industry that controls 20 ships or fewer, but this is not just a question of low margins.

Digitalisation is still a fragmented project, and the market is still flooded with start-ups trying to solve problems in isolation. Small owners particularly can struggle to adapt to the requirement for more data transparency and collaborative decision making.

Collaboration is often promised and yet still too often remains elusive, agreed the panel.

“We are working still too much in silos,” said Mr Kälkäjä.

Another persistent problem raised by the panel was the misalignment of incentives between owners and charterers which remains a major blocker to the data transparency required to scale digital innovations beyond siloed projects.

But here at least, there is a glimmer of hope that the implement of new regulation, including the introduction of annual carbon intensity indicator, known as CII, grades from next year and the EU Emissions Trading System, have the potential to catalyse change.

“Charterers and shipowners are on opposing sides of the equation,” explained Gary Noonan, head of transition technologies at Ardmore Shipping.

“When one loses out the other wins, and that is a difficult relationship to have if you want to improve efficiency. There is no win-win. There is either a compromise or a win-lose.”

But with the introduction of CII, this shifts the conversation because it introduces common metrics that both owner and charterer understand.

Charterers will be hit with requirements to redeliver the vessel with the same CII grade. Owners will consistently find themselves in an environment where a poor CII grade results in their vessel being left off hire.

“What is missing is the insight that both parties can share and leverage together — you have to understand both the performance of the vessel and operational decisions to understand the impact on CII,” explained Ms Dang.

While the panel were unanimous in agreeing that the shared imperative to introduce efficiency measures as a result of regulation would ultimately spur a more collaborative and innovative environment, Mr Noonan warned that there were still hurdles to overcome.

“It is not an easy problem to solve. If a charterer takes a ship and uses and abuses it for a year, and then gives it back with an ‘E’ rating, where does the owner lie? The charterer might even look for a discount for the following year because the ship has a bad rating. Ultimately, it comes back to relationships, which the chartering world is built on.

“However, I do think there is an awful lot of work to be done on the legal side of things. There is certainly potentially a lot of litigation on the horizon. Unfortunately, we are only two months away from this coming into power, so time is running out,” said Mr Noonan.

The Lloyd’s List Podcast: How to de-risk the future of shipping

MAN ES sets out path to halve its emissions by 2030