Delays in inspection have increased voyage times for the grain corridor, with more than 40 vessels taking at least 27 days to complete their journeys 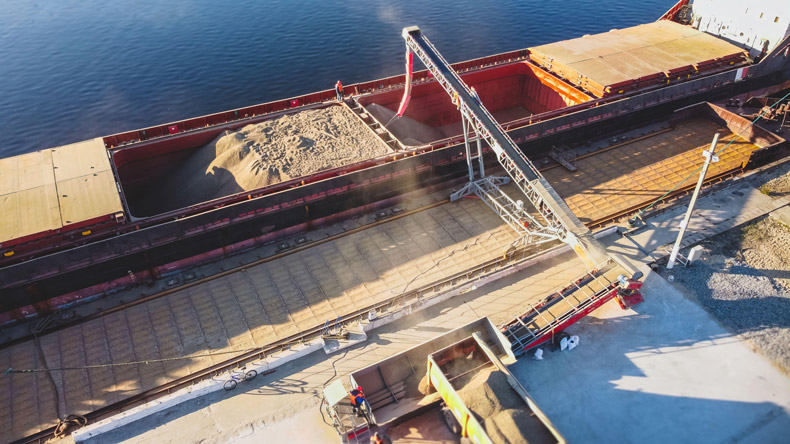 Source: Evgeniy Alyoshin / Alamy Stock Photo Some 8.5m tonnes of grain and other foodstuffs have been exported under the Black Sea Grain Initiative.

NEARLY 100 vessels that have loaded Ukrainian cargo are waiting in the Black Sea and Sea of Marmara for inspection by the Joint Coordination Centre.

Growing demand combined with documentation and compliance issues have led to delays in JCC inspections, which are required under the Black Sea Grain Initiative.

The resulting logistics bottleneck has increased the time it takes to complete a journey through the grain corridor.

Some 45 vessels that are still waiting to be cleared started their voyage more than 27 days ago, according to Lloyd’s List Intelligence vessel-tracking data.

There are 25 ships waiting that started their journeys more than 30 days earlier.

More than half of the vessels sat idle departed from either Odesa, Chornomorsk or Yuzhnyi on or before October 12.

An estimated 25 inspections per day are needed to avoid the backlog. From October 17 to 22, an average of 9.6 inspections took place each day, according to JCC data. No vessels were inspected on October 23 due to poor weather.

Export capacity under the Black Sea Grain Initiative has fallen because of the lengthening voyage time.

The number of weekly departures from the export hubs have slowed over the past two weeks. A total of 35 outbound sailings were recorded the week of October 17, down from 40 the week prior.

Representatives from the United Nations, Ukraine, Russia and Türkiye are meeting to discuss the future of the corridor while the Joint Co-ordination Centre tackles a logistics bottleneck

There is concern that ships arriving to pick up cargo from Ukraine’s export hubs will not have enough time to clear the corridor before the deal is set to expire in mid-November.

Discussions are under way between representatives from the UN, Ukraine, Russia and Türkiye for the extension and potential amendment of the original agreement.

Ukraine’s minister of infrastructure Oleksandr Kubrakov expressed confidence that the grain deal would continue operating after a meeting held in Istanbul on October 16 with Türkiye’s defence minister Hulusi Akar.

Russian officials have cast doubt on the renewal of the deal over the past several months, with Russia’s deputy UN ambassador Dmitry Polyanskiy telling reporters last week not to be “too optimistic” about its extension. 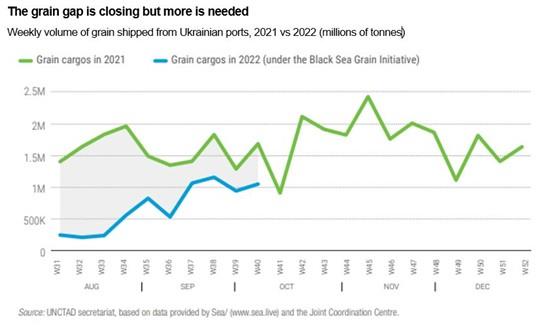 Russian representatives have repeatedly cited there being no tangible benefits to their own grain and fertiliser exports as cause to allow the deal to expire.

The UN Conference on Trade and Development has warned that prices on commodities such as wheat and maize will rise again if the Black Sea Grain Initiative is not renewed.

Weekly tonnage of grain shipped under the initiative reached 1.2m tonnes by September, according to Unctad. That is still well below 2021 levels.

JCC data shows that as of October 23, 8.5m tonnes of grain and other foodstuffs have been exported under the grain deal.