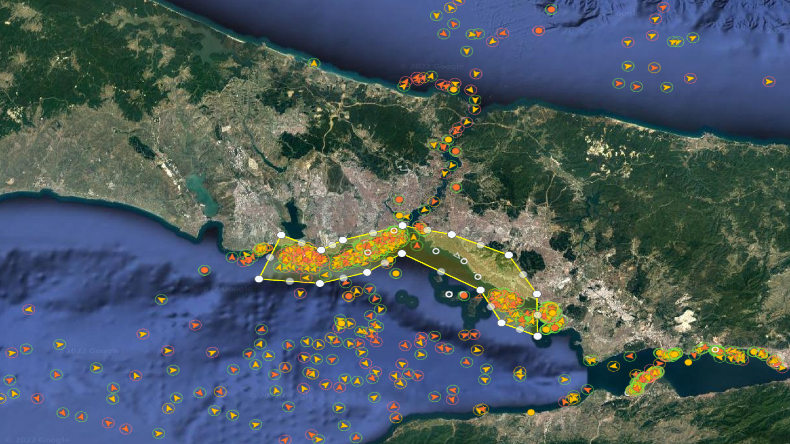 Source: Lloyd’s List Intelligence / Seasearcher Congestion in the Sea of Marmara has worsened in recent weeks.

THERE have been two reported collisions in the Sea of Marmara during the past week as congestion intensifies in the area.

Christina B. had travelled from Shanghai to load Ukrainian cargo under the Black Sea grain initiative.

Two days later, Panama-flagged bulk carrier New Horizon (IMO: 9290701) came into contact with general cargoship Lady Nurgul (IMO: 9361263). The vessels have since departed and are continuing on their journeys.

Only two other collisions have occurred in the area this year, one in August and another in May, according to Lloyd’s List Intelligence casualty data.

The eastern Mediterranean and Black Sea is the second-most common region where collisions occur. Incident rates tend to be higher in busier shipping areas, and the crossing of traffic heightens the risk.

Logistics bottlenecks with the grain corridor inspections are exacerbating congestion in the Sea of Marmara.

An average of 273 commercial vessels per day had to stop and wait in the anchorage areas outside the southern entrance of the Bosporus during the week running October 5-11, according to Lloyd’s List Intelligence data.

This is up from a daily average of 221 ships during the first week of September.

Ships are also waiting in the broader Sea of Marmara.

The JCC needs to conduct some 25 inspections per day to avoid backlog. Inspections, which are required under the Black Sea deal, are conducted jointly by Russia, Türkiye, Ukraine and the United Nations.

About 26 vessels waiting in anchorage on October 18 were signalling destinations in Ukraine, including the country’s Danube ports.