Polish master receives a standing ovation at Cyprus Maritime conference after telling his story of two years in a Mexican jail without being convicted, moving him and many in the audience to tears 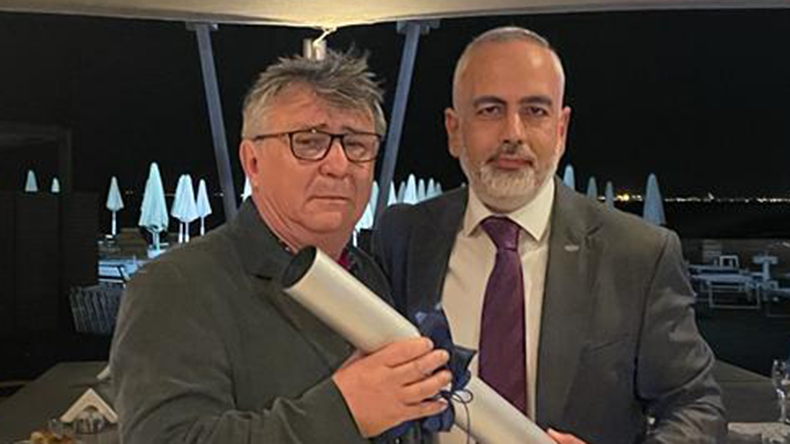 A POLISH master who spent two years in a Mexican jail received a standing ovation and moved an audience of shipping executives to tears as he told his story at Maritime Cyprus.

Andrzej Lasota, who started his career in 1969 aged 14, recounted the circumstances of his detention from July 2019 until February 2021 without being convicted.

He reported to authorities that his crew on the Cyprus-flagged 31,923 dwt bulk carrier of which he was the master, UBC Savannah (IMO: 9220976), discovered 240 kg of cocaine in the hold while the ship was at Altamira port.

After five days of co-operating in the resulting investigation, armed military forces and police arrived at the dock, while drones flew overhead and took Capt Lasota to jail.

“The judge didn’t have anything against me but concluded that if somebody has the possibility to know something, then he knew it,” he told the conference audience.

The master was not provided with a translator in his native language, while international shipping conventions that defined the vessel as within Cyprus jurisdiction were not adhered to. At all times, Capt Lasota followed the correct rules and procedures.

“About the jail, I will not talk about it as it is so bad and we have women here,” said Capt Lasota.

The deputy shipping ministry and Cyprus government, along with the shipowner and numerous seafarer agencies and shipowner associations, lobbied the Mexican government over Capt Lasota’s case.

After a different judge heard his case, and after suffering from health issues, he was finally released.

“They fought to the end for me,” said Capt Lasota, thanking those who helped him and his family as he ended his 25-minute talk.

Those present in the room applauded loudly and then gave the captain a standing ovation that moved him and many in the audience to tears, a scene rarely observed at shipping conferences.

“It was incredibly moving to hear of your strength and your resilience, and incredibly unjust,” said International Transport and Workers’ Federation secretary-general Stephen Cotton. “I can’t imagine how terrifying it was. You are a very inspiring individual, not many people would have your stoicism… and not be intimidated”.

Capt Lasota attended the conference as a guest of the deputy shipping ministry, which wanted to showcase in the most powerful way possible the injustice of the criminalisation of seafarers.

“The regulators must find a way so that some innocent, professional captain does not lose two years of his life,” Mr Cotton said. “Seafarers have to feel that they will be protected and they don’t feel that. You were on a good ship, with a professional crew and a good owner… and it still took two years.”

Capt Lasota is now retired after 52 years at sea but told Lloyd’s List it was only on doctor’s orders, and he had wanted to keep working.