Ship traffic ground to a halt after an explosion left the bridge connecting Crimea to Russia partly destroyed. It resumed the following day to near-normal volumes

The Kerch Strait is a critical maritime passage for Russian exports. Traffic was temporarily paused at the weekend after an explosion on the Kerch Strait bridge 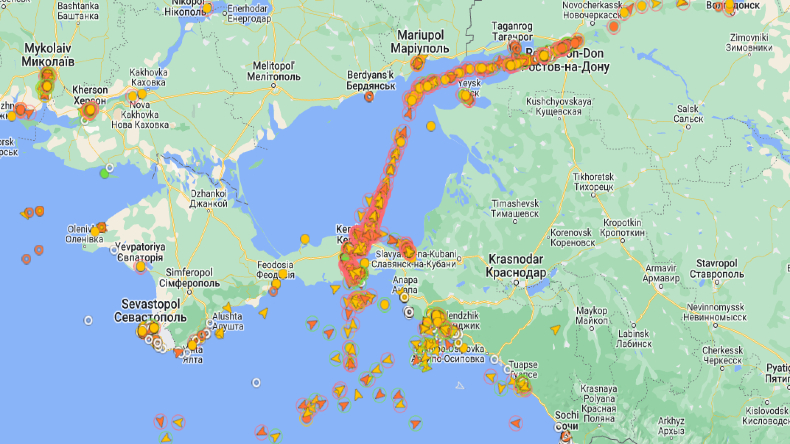 VESSEL traffic through the Kerch Strait has resumed after being temporarily halted in the wake of an explosion that damaged a key bridge linking Crimea with mainland Russia.

Shipping was temporarily prevented from transiting on October 8 following the explosion on the crucial supply route for Russian forces in Ukraine early that day.

A total of 52 vessels passed under the Kerch Strait bridge on October 9, suggesting that normal traffic volumes had been quickly resumed.

The 19 km (12 miles) bridge over the Kerch Strait is the only direct link between the transport network of Russia and the Crimean peninsula, which Moscow annexed from Ukraine in 2014.

The vessel was carrying 33 people; 10 persons have been reported missing

The road and rail crossing is crucial for the supply of fuel, food and other products to Crimea, where the port of Sevastopol is the historic home base of Russia's Black Sea Fleet. However, the Kerch Strait is critical to both Ukraine and Russia.

“It is significant that they did not drop the center span that allows ships to transit between the Black Sea and the Sea of Azov,” tweeted Sal Mercogliano, a maritime historian and associate professor of history at Campbell University. “That would have been a significant loss to Russia’s ability to export food, fuel and fertiliser.”

The Kerch Strait connects the Sea of Azov and the Black Sea. The passage is critical for moving goods out of Russia’s Sea of Azov ports, in particular Rostov-na-Donu, and the southern part of the strait plays a fundamental role in the export of Russian grain and oil.

There are two major ship-to-ship transfer areas in the southern part of the Kerch Strait that have been operating for over 20 years. Oil and oil products as well as bulk commodities, mainly grain, are transported there onto larger ships which take the cargoes to foreign buyers.

The use of STS is more efficient logistically than shore terminals and port calls.

Had the explosion cut off maritime traffic flows, the renewal of the grain deal would have been at risk, says Mr Mercogliano.

Russia benefits from the Black Sea grain initiative in that its commercial ships are protected from Ukrainian attack.

The Ukrainians have had several military successes in the Black Sea, including the recapture of Snake Island and strikes on occupied Crimea.

Logically, Ukrainian forces would have considered attacks on the Kerch Strait or vessels travelling through the Sea of Azov, he said.

The grain deal has ensured the safety of Russian vessels and ships carrying Russian cargo in the Black Sea and Sea of Azov, allowing commercial trade to continue unimpeded. Without this benefit the Kremlin would have less reason to renew the Black Sea grain corridor deal when it is due to expire next month.

No one has claimed responsibility for the explosion on the Kerch Strait bridge.