‘I took shipping personally because I consider it to be one of the critical elements for growth and transformation, and indeed, for tackling the decarbonisation challenge globally’ — Anne-Marie Trevelyan 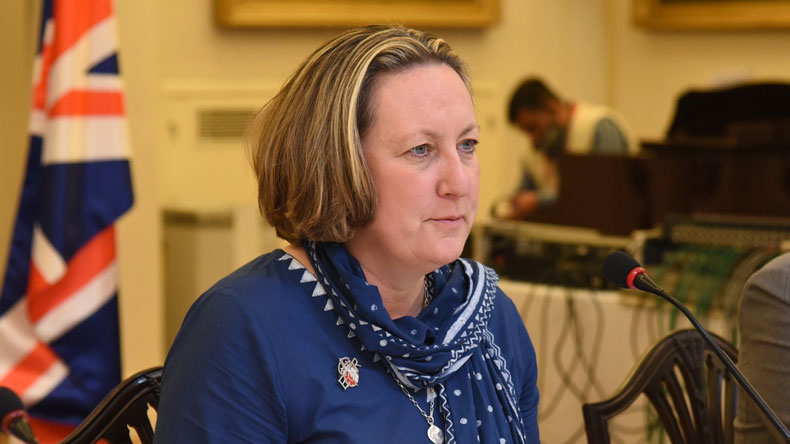 THE maritime sector should be at the heart of the UK’s growth agenda and as such the sector will receive government support, particularly when it comes to decarbonisation research and development. But it is up to industry to lead the process, according to secretary of state for transport Anne-Marie Trevelyan.

Since taking over as transport minister with direct responsibility for shipping last month, Ms Trevelyan has told Department for Transport officials to de-prioritise any projects that do not contribute to the government’s ‘green growth’ agenda.

“I have been very clear from day one that there are two words we need to be focused on: growth and green. If what you’re doing in the DfT doesn’t tick one, or ideally both boxes, then we probably don’t want to be focused on it right now,” she told Lloyd’s List in her first interview since taking on the maritime brief.

UK prime minister Liz Truss appointed Ms Trevelyan to take over transport with a clear instruction to support her government’s defining push for growth — an agenda she believes the maritime sector should be at the heart of.

Among the winners in the last round of the Clean Maritime Demonstration Competition was a study between the ports of Dover, Calais and Dunkirk for the transition to electric ferry services to and from the UK

“There is an understanding and the assurance from me that maritime can be at the heart of that [UK growth strategy] and it is absolutely critical. So my colleagues will be unsurprised to find me talking about this a lot,” said Ms Trevelyan.

Details of maritime-specific priorities are yet to emerge and industry lobby groups have been quick to draw up wish lists and requests for face time with the new minister, who is attending the Conservative Party conference this week.

Support for decarbonisation research and development is already high on the agenda following Ms Trevelyan’s launch last week of a third round of funding for the UK’s so-called Clean Maritime Demonstration Competition.

But beyond the green growth priorities, shipping lobby group Maritime UK is keen to a push a priority list including additional tonnage tax reforms and an extension of Freeports and investment zones.

The most immediate opportunity for shipping, however, will be to capitalise on a uniquely high-profile position for shipping within government.

The decision by Ms Trevelyan to personally oversee shipping follows her close association with the industry, having dealt with shipping issues during her ministerial terms covering international development, trade and business, energy and industrial strategy, where she was focused on green growth and climate change.

Shipping has suffered from a lack of political profile in the UK across successive governments. However, the appointment of several other key positions within government going to ministers familiar with the shipping sector has opened up an unusual window of opportunity for maritime issues to gain traction at a much higher political level than they have for several years.

In terms of the maritime decarbonisation agenda, closer working with the Department for Business, Energy and Industrial Strategy where former shipping minister Nusrat Ghani has been appointed minister of state, is seen as critical.

“Getting different parts of government to work together is key because none of this is any one department’s purview, so if you've got energised ministers across departments working together that really helps,” said Ben Murray, chief executive of Maritime UK.

Ms Trevelyan says she is committed to working across government departments with colleagues including Ms Ghani, and the fact that she chose to take on shipping personally should be taken as a statement of intent when it comes to raising the maritime profile at cabinet level.

The UK government stands ready to help the maritime sector, particularly when it comes to zero-carbon research and development, explained Ms Trevelyan. However, she pointed out that the shipping industry is behind several others in terms of progress towards decarbonisation, and it is a process that ultimately must be led by industry rather than government.

“The government will come in and support responsibly as industry finds their way in this process of decarbonisation,” said Ms Trevelyan. “Bluntly, shipping is behind some of the other sectors right now and so the UK is determined to ensure that we support the R&D thinking and demonstration phases so the industry can then take up the choices that they want.

“But I want them to decide — they are the ones who work on the global footprint and the UK is here to support our industries to provide the solutions which will meet the UK net zero by 2050 challenge.”

Explaining why she took the unusual decision as secretary of state to personally oversee the shipping brief, Ms Trevelyan said: “I took shipping personally because I consider it to be one of the critical elements for growth and transformation, and indeed, for tackling the decarbonisation challenge globally.

“We are an island nation and have always been dependent on the sea as a result for all our trade and our diplomatic or geopolitical strength. I have no maritime family, I think it’s just my own instinct about how the UK fits on the world stage. Maybe it comes from the fact that the map on my wall as a child had the UK in the middle… The instinct comes from a deep sense of the fact that we are sitting in the middle of the world surrounded by water, so I’ve always believed in the importance of the maritime sector and maritime security.”

In terms of detail, Ms Trevelyan has promised further updates once she has had time to review her new brief, but she stresses the importance of collaborative working and has invited the industry to be part of the government’s green growth agenda.

“My door is 100% open for everyone to come and share their thinking and their vision, and I intend to harness the energies of everyone to deliver. I’m a group leader and believe in many hands making light work. So I expect everyone to put their shoulders to the wheel, even though it’s a ship, and make sure that we move this forwards at the pace it needs to do.”

The View: Talk before you walk