Subterfuge tanker in collision with boxship in Malacca Strait

An aframax tanker recently engaged in illicit tanker trades has been involved in a collision with a post-panamax containership chartered to Maersk in the waters of Batu Pahat, Malaysia 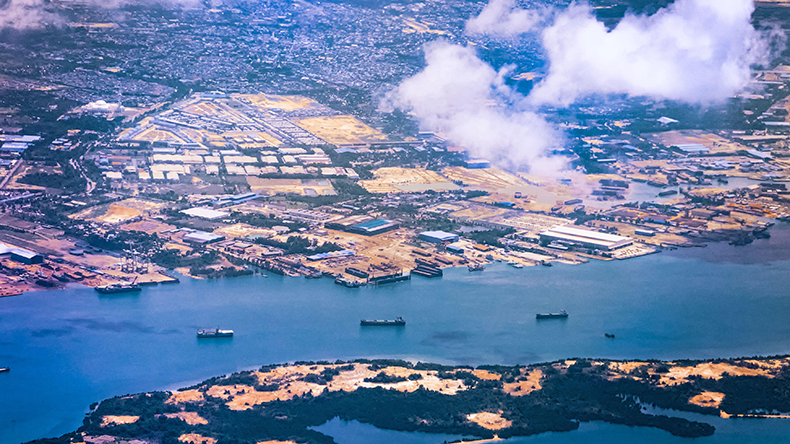 Source: Natallia Pershaj / Alamy Stock Photo A crude oil tanker was involved in a collision with a post-panamax containership in the Malacca Strait on September 28.

A CRUDE oil tanker previously associated with deceptive shipping practices has been involved in a collision with a post-panamax containership chartered to Maersk.

The incident on September 28 involved the 20-year-old Zephyr I (IMO: 9255880) and the 7,800 teu capacity boxship GSL Grania (IMO: 9285653) in the waters of Batu Pahat, Malaysia, according to Cmdr Mohd Haniff Mohd Yunus, maritime zone director for the Malaysian Maritime Enforcement Agency.

The 2004-built GSL Grania, which is long-term time chartered to Maersk from Global Ship Lease and operates on a 2M (the Maersk and MSC alliance) US east coast to Asia service, was bound for Tanjung Pelepas, Malaysia.

“We can confirm that GSL Grania, a chartered vessel of Maersk, has been involved in a collision with Zephyr I in the Singapore Strait while en-route to Tanjung Pelepas, Malaysia, from Savannah,” Maersk said in a statement.

“All crew members are safe. No pollution or container damage have been reported.”

The vessel has sustained hull damage and is now en-route to Tanjung Pelepas, where further assessments will be carried out on arrival, it said, adding customers have been informed.

Lloyd’s Agent’s information stated GSL Grania’s master claimed the collision was caused by Zephyr I “losing control”. The Panama-flagged Zephyr I, which was on passage from Primorsk, is understood to have sustained considerable damage to its bow during the collision but has not spilt any of its cargo, according to local media reports.

Mystery surrounds the identity of the beneficial ownership of the Zephyr I, which was sold earlier this year. The ship was engaging in shipping practices described as deceptive by the US Treasury Department. This includes spoofing its automatic identification system signals, flag and name and switching of ownership twice since March.

The 2002-built vessel was initially sold in March by Swedish shipowner Lundqvist Rederierna under whose ownership it was named Alfa Italia. The buyers were listed as Monumont Ship Management.

Its registered owner was changed earlier this month to Skylla Navigation Corp, a company registered in the Marshall Islands, according to Lloyd’s List Intelligence data. At the same time, the ship’s name was changed from Zhen I, under the Palau flag, to Zephyr I.

Monumont Shipping is also the owner of three other elderly tankers, also engaged in sailing and trading patterns that suggest it has been shipping US-sanctioned Iranian oil.

Like the recently renamed Zhen I, all tankers were flagged in Palau. The 24-year-old aframax Bovista (IMO: 9199713) had been undertaking ship-to-ship transfers of cargoes in international waters off Fujairah, for transhipment to tankers in waters off Malaysia for onward shipment to China, vessel-tracking data show.

The suezmax Julia A (IMO: 9236353) has spent protracted periods at anchor in waters off eastern Malaysia, where many tankers engaged in shipping Iran-origin crude and fuel oils are based.

The 2004-built long-range one tanker Boceanica (IMO: 9267132) is also owned by Monument Ship Management, according to Lloyd’s List Intellgence.

As for the former Zhen I, this vessel was twice recorded as having loaded Russian crude oil from the Baltic port of Primorsk and unloaded the cargo via ship-to-ship transfer operations in mid-Atlantic. It also shipped a cargo directly to Asia from Primorsk.

Zephyr I was entered with the American Club on or about 12 September, the marine mutual confirmed in an email to Lloyd’s List. The ship joined others in the same fleet, after going through the club’s standard due diligence procedures. The casualty has resulted only in hull claims, it added.

Bulker ‘stable’ after collision with LNG carrier in Gibraltar