Engine slip means methane emissions will still double for shipping voyages in Europe by 2030, even if all fuel is renewably sourced, according to a study by the International Council of Clean Transportation

EUROPE would need to provide annual subsidies amounting to €17.8bn ($17.8bn) by 2030 to bridge the cost gap between renewable or synthetic liquefied natural gas marine fuels and conventional, fossil fuel supplies, according to the International Council of Clean Transport.

Without policy support, shipowners could pay as much as €10,000 per tonne for biomethane or €2,350 per tonne for e-LNG or e-methane by 2030, around seven to 30 times more than the estimated cost of the fossil fuel equivalent in eight years’ time.

Even so, methane leaks in internal combustion engines fuelled by LNG would still have profound climate change impacts, even for renewably derived e-LNG fuels, a study by the ICCT says.

It calculated that the carbon price in Europe would have to increase nine-fold from its current level to promote any shift to renewable LNG. If all LNG used for voyages came from renewable sources, methane emissions from shipping would still double in Europe. There would be a failure to meet global pledges on methane reduction. 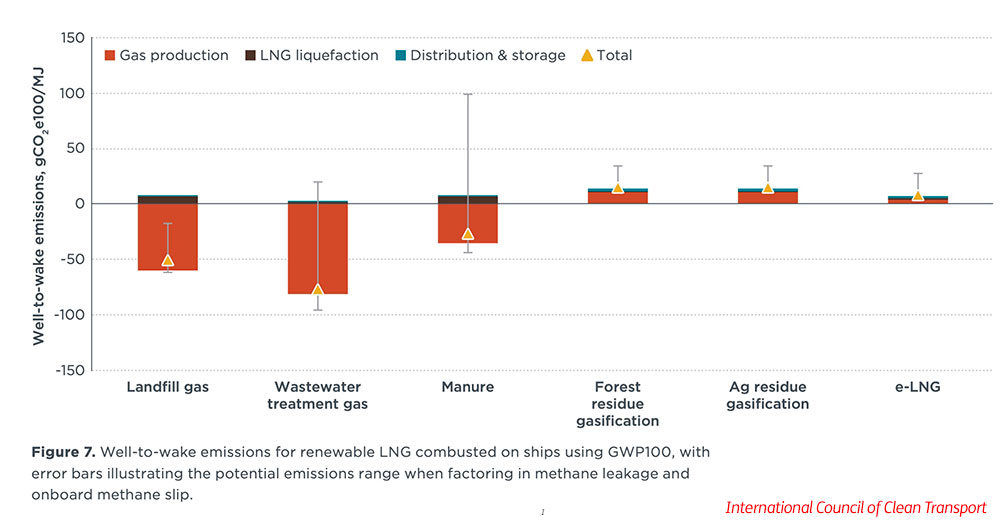 Synthetic drop-in e-diesel or e-methanol produced from either renewable electricity (via electrolysis) or gasified biomass had similar production costs and technical constraints as producing LNG, but were better options, the ICCT said.

LNG has been positioned as so-called bridging fuel as shipping transitions to zero-carbon targets amid strident criticism from international environmental groups, including the ICCT.

About 1,000 vessels are trading that can use LNG, with a further 700 ships on order, said the ICCT, citing statistics from shipbroker Clarksons.

Swapping to so-called drop-in fuels such as liquefied biomethane, e-methane — also known as e-LNG or synthetic LNG or methane — produced from renewable sources is frequently touted as the next pathway to lowering greenhouse gas emissions in shipping.

However, the council’s study concludes that potential European supplies of LNG from renewable sources by 2030 would be low and availability limited by the very high cost, unless the European Union doubled current, equivalent industry subsidies. 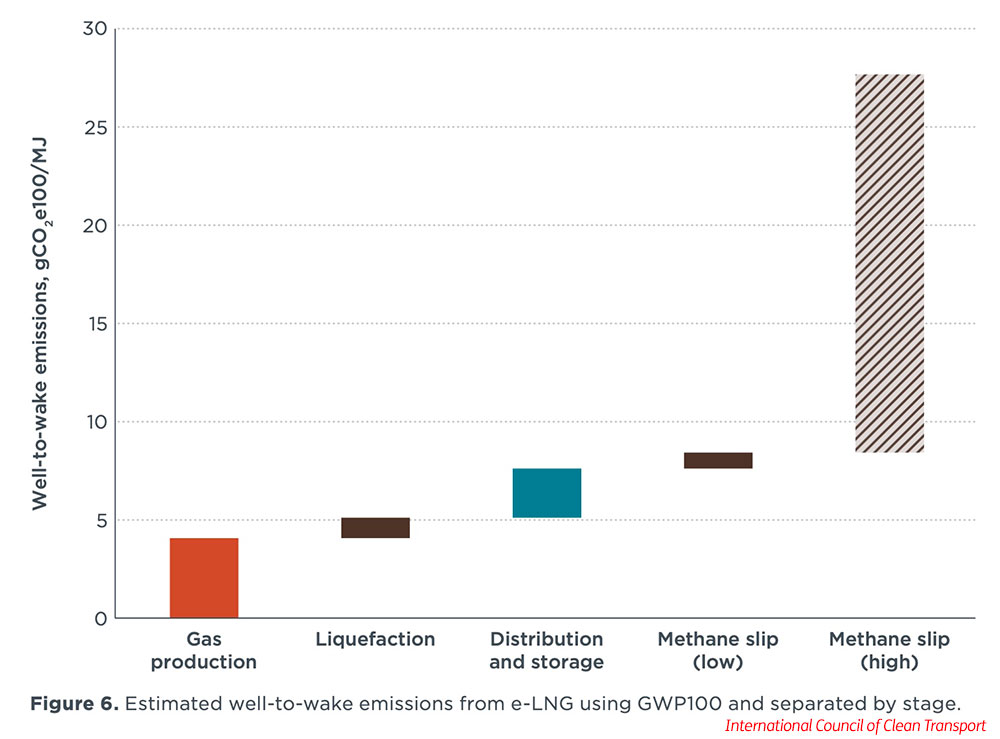 “It is important for policymakers and all stakeholders to understand that other fuels could offer low life-cycle emissions without the methane problem,” the report said.

“Synthetic diesel and green methanol have production costs and technical constraints similar to renewable LNG, but these liquid fuels are easier to store on board than LNG and could be supplied using existing distribution networks.

EU subsidies equivalent to €1,200 per tonne for renewable LNG in the form of biomethane would see a switch to meet 4% of demand forecast global marine fuels in Europe in 2030, according to the ICCT. To bring this figure to 90% of demand via biomass feedstocks, the subsidy would need to rise to €2,400 per tonne, “higher than any other policy incentive in Europe”.

Global LNG marine fuel demand was forecast to rise to 36.2m tonnes by 2030, three times higher than 2019 levels, according to the study. The EU’s share, based on ship voyages between the 27-member countries’ ports, was seen at 20.5%.

E-methane is produced via carbon dioxide hydrogenation at high temperatures, but its viability is uncertain given the large amounts of energy required to first capture the hydrogen, and then combine the carbon dioxide with zero-carbon hydrogen.

The power-to-gas process breaks down water into its component parts using electrolysis to produce hydrogen and oxygen with electricity used generated from renewable sources such as wind or solar.

Biomethane is produced through the gasification of solid biomass followed by methanation with feedstocks used to produce biogas including animal manure, agricultural waste, food and green waste, or wastewater sludge.

FuelEU Maritime policies now being finalised mandate that LNG can be used as a marine fuel until 2040 when shipowners will have to switch to e-methane or biomethane.

A government subsidy of €2,400 per tonne was needed to see the industry switch to synthetic fuels, according to the ICCT report.

The environmental group estimated that 42% of LNG marine fuel demand would be met by e-LNG, with biomethane produced from agricultural residues also at 42% with subsidies at this level.

If 90% of LNG marine fuel used in the EU was renewable in 2030, the ICCT estimated a 79% fall in carbon dioxide-equivalent, well-to-wake emissions (based on a 100-year global warming potential) compared with using fossil fuel supplies.

Whether LNG used in 2030 was renewable or not, the ICCT said that overall emissions would still rise compared with 2019 levels, because of methane slip in dual-fuelled internal combustion engines.

Methane emissions — even with €17.8bn in subsidies annually — would double, the ICCT said, and triple with lower levels of policy support.

With 100% renewable LNG, the ICCT assessed methane emissions from engine methane slip in EU shipping at 164,000 tonnes in 2030 and upstream (or production) emissions at 31,000 tonnes.

This would fail to meet targets set at the Global Methane Pledge signed at the COP26 climate change conference last November. Signed by 103 countries. It aims to cut world methane emissions by 30% from 2020 levels over the next decade.

LNG-fuelled ships sailing in Europe would need to emit fewer than 70,000 tonnes of methane annually to meet the target, said the ICCT.

This could only be achieved if most ships used ‘best-in-class’ engines. These high-pressure dual-fuel engines accounted for 11% of the current 1,000 vessels on the water and would drop to 7% by 2030 as shipowners favoured ordering ships with cheaper four-stroke engines, according to the study. 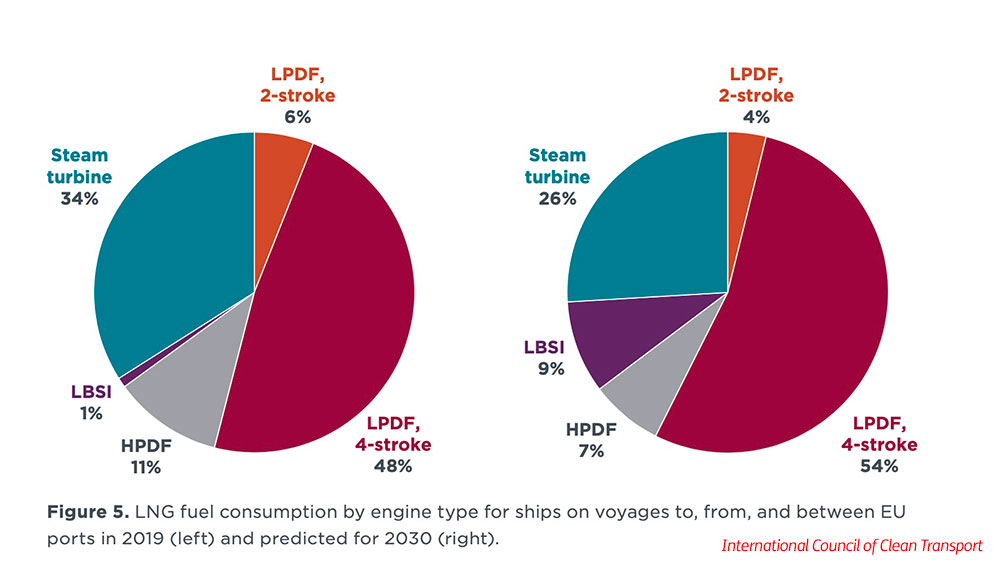 “We do not believe it is realistic to think that the existing fleet could or would be modified to achieve the same low methane slip emissions as high-pressure dual fuel engines by 2030.

“We maintain the projected 2030 engine mix and assume that methane slip from low-pressure, dual-fuel and lean-burn spark ignition engines could be cut in half. Total methane emissions would be approximately 114 kilotons, which is still higher than 2019.”

The International Maritime Organization estimated that international shipping’s vessel-based methane emissions in 2018 were at 148,000 tonnes compared with 59,000 tonnes in 2012.

Prior industry studies have shown that greenhouse gas emissions were reduced by between 6% to 23% for LNG-fuelled ships compared with marine fuel oils — with the significant variation due to engine type.

The study did not allow for the possible introduction of technology now under development by marine engine manufacturers that aimed to halve methane slip on the leakiest engine type for new models available by 2025.