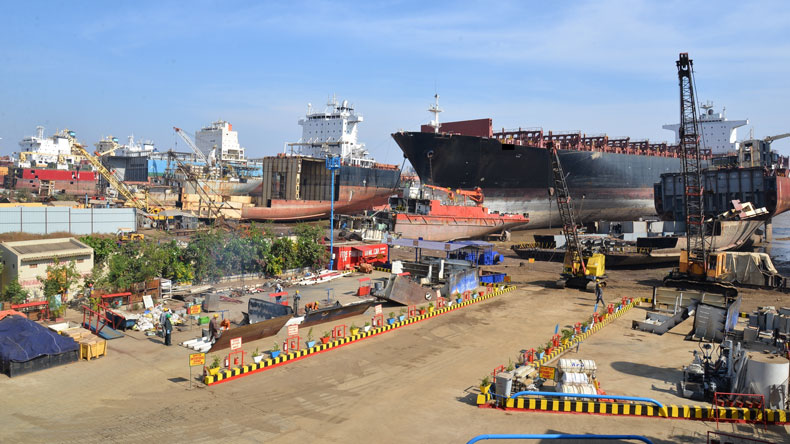 No containerships have been scrapped so far this year.

SHIP recycling is showing signs of life after the biggest market downturn in a decade, as the collapse in freight rates for large bulk carriers pushes owners of capesize bulkers to send them for scrap.

Last month, 25 ships of a combined 537,000 gross tonnes were either beached or sold for scrap, according to Lloyd’s List Intelligence data. That compares with 159,980 gross tonnes from 15 vessels confirmed as demolished during July, the lowest level of recycling activity seen in a decade.

“What we are currently witnessing is a correction of the dry cargo freight segment and in particular in capesize units which we anticipate to start keeping the recycling facilities busy,” vessel cash buyer GMS senior trader Vagelis Chatzigiannis told Lloyd’s List. “It remains to be seen if this will spread to other dry cargo types such as panamax and smaller units prior to the time when we start witnessing an inflow of containerships.”

Recently reported scrap sales in the capesize bulk carrier segment included the 18-year-old, 174,000 dwt Star Tianjin (IMO: 9292565) which was sold by Chartworld Maritime Management to Indian buyers for $600 per light displacement tonne on an “as is” basis with delivery at Visakhapatnam, India.

Pricing levels, which have dipped by around 20% from the record highs seen in the first quarter of the year, appear to have stabilised with average prices being quoted by Chittagong demolition yards currently around $570 per ldt.

“We are still at historically high levels and it would only be logical for pricing to face some corrections closer to historical average levels (circa $400 per ldt),” said Mr Chatzigiannis.

“Nonetheless, fundamentals seem to be supporting the current pricing so I would not expect a major correction in the short term unless factors like currencies and commodities witness major corrections.”

Following the severe downturn in demolition markets during the summer, aggravated by the Indian subcontinent monsoon season, current demand for ships for scrap is being driven by the Indian market.

“India remains the most resilient market and is now becoming the go to destination, albeit at lower prices, for shipowners wishing to get their vessels delivered comparatively hassle and headache free,” according to a recent GMS report. “The other major subcontinent markets, Pakistan and Bangladesh, have been teetering perilously close to the brink with Pakistan having been beset by catastrophic flooding with thousands of people losing their lives and millions displaced.”

The other key ship demolition market of Türkiye remains quiet as currency pressures and local sentiment curb any upturn in scrapping activity.

Despite limits on demolition capacity, owners are unlikely to consider other countries for scrapping.

“China is currently maintaining its policy of recycling only China-flagged vessels, and there are no indicators at least for the time being, that foreign flagged vessels would be allowed to be recycled any time soon.

“With regards to other nations, there are some facilities which are evaluating ship recycling projects, and developing their infrastructure in that respect, but that would be reflecting individual facilities mostly rather than multiple facilities in the same country,” said Mr Chatzigiannis.

Demolition sales in the dry cargo sector may be on the rise but scrapping activity this year has been mainly driven by the tanker sector.

With no containerships having been sold for recycling in 2022, according to Lloyd’s List Intelligence data, liner operators and non-operating owners are expected to demolish older, less efficient tonnage as downward pressure on freight rates accelerates in the major container trades.

“We believe that when increased carbon abatement regulations kick in next year this will require the slowing down of speeds of older ships and potentially cap the volume of demolition of containerships,” Braemar container market analyst Jonathan Roach told Lloyd’s List.

“This is really a short-term fix for services that deploy older ships and may require additional tonnage to maintain schedule integrity. This situation/solution to slowing ships down is short term and will only last a couple of years until fleet renewal has replaced a big percentage of the older non-eco boxships.”

“There is a containership demolition bonanza on the way but we may have to wait until the end of 2024 through 2025 to really see demo markets heating up,” said Mr Roach, adding that freight markets are expected to normalise by mid-2023. “At this point charter earnings are likely to downwardly react and demolition could become an option again.”

Liner operators and non-operating owners are in the process of modernising and future-proofing their vessel fleets to satisfy shippers as well as regulators, adding further to expectations that elderly boxships will hit subcontinent beaches from 2023.

The Lloyd’s List Podcast: It is time to take another look at recycling