Ukrainian government will ask the UN to include the port of Mykolaiv in the initiative, while Russia casts doubt on the extension of the existing agreement

There are 60 requests to load at Ukraine’s export hubs under the Black Sea grain corridor initiative, with about 980,000 tonnes of grain and other foodstuffs exported so far 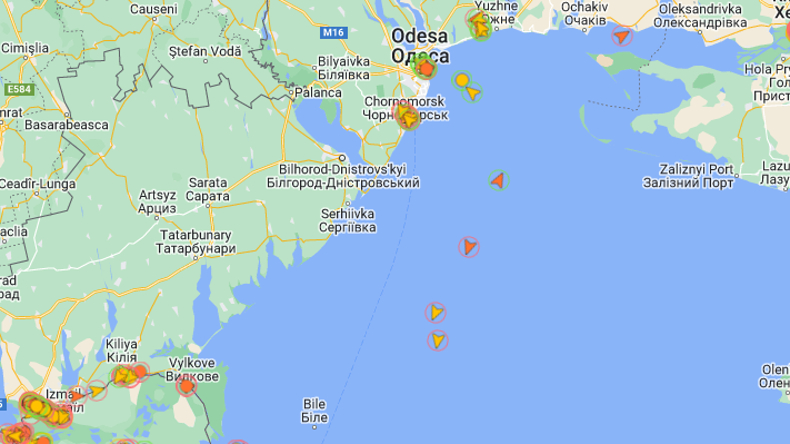 Source: Lloyd’s List Intelligence / Seasearcher A total of 44 ships have left Ukraine. The image above shows the bulk carriers and general cargoships active in the grain corridor.

A TOTAL of 44 ships have left Ukraine under the Black Sea grain initiative, with 984,536 tonnes of agricultural products on board.

According to Ukraine infrastructure minister Oleksandr Kubrakov, there are 60 applications for inbound vessels to pick up cargo at the ports of Odesa, Chornomorsk and Yuzhnyi.

The departure of Oris Sofi (IMO: 8920282), recently renamed from Mela Rossa according to the JCC, and Zelek Star (IMO: 9379117), carrying sunflower oil and peas respectively to Türkiye, were delayed to August 26 because of weather conditions.

After three weeks of operations the JCC has introduced a new route for ships to travel to and from the export hubs which will come into effect on August 26.

“It allows for shorter transit in the maritime humanitarian corridor and easier planning for the shipping industry,” says the JCC.

Ukraine has expressed interest in extending the grain corridor to include a fourth port — Mykolaiv.

The port’s infrastructure has been damaged by several Russian attacks. However, the port is technically ready to start operations as the damages are not critical for the export of agricultural products, according to Odesa-based Lloyd’s agent Eurogal.

It is not safe for the port to operate though. Ukraine’s Ministry of Infrastructure will reportedly make an application to the United Nations for the inclusion of Mykolaiv in the grain corridors initiative “when the military situation allows”.

Automatic identification system data from Lloyd’s List Intelligence shows that there are seven bulk carriers and two general cargoships stuck in and around the port of Mykolaiv as of August 26. It is possible there are more vessels as many ships have turned off their AIS due to the circumstances.

While the grain corridor, in its current form, has had the desired result of freeing idled grain reserves, there are doubts whether the deal will be extended.

Russia’s ambassador to the UN, Vasily Nebenzya, said there are “alarming trends” regarding the Black Sea initiative at a UN Security Council meeting this week.

The purpose of the meeting was to discuss Russia’s invasion of Ukraine.

Mr Nebenzya said that only one of the ships leaving Ukraine’s export hubs has travelled to Africa.

He is referencing the Brave Commander (IMO: 9136931) which picked up a cargo of wheat for Djibouti as part of the World Food Programme’s response to the drought in Ethiopia.

“This is completely inconsistent with the originally stated goal of combating hunger in countries in dire need of grain,” said Mr Nebenzya.

He does not mention bulk carrier Karteria (IMO: 9236092), the second vessel chartered by the WFP which passed JCC inspection on August 21.

The vessel is docked at the port of Chornomorsk, according to Lloyd’s List Intelligence vessel-tracking data.

It will be transporting 37,000 tonnes of wheat to Türkiye. From there, the cargo will be moved to a different ship bound for the agency’s operation in Yemen.

The first ships to leave Ukraine and travel the Black Sea corridor arrived at the ports before the invasion started. They are fulfilling existing contracts.

Most of the vessels that have left in the initial weeks of the initiative were loaded with corn products because this was the harvest at the time of invasion.

JCC’s interim head Fred Kenney told Lloyd’s List that the silos need to be emptied before they are filled with wheat.

The true cause of the global food crisis, Mr Nebenzya told the UN, is sanctions against Russia. He called for a resolution to the problems that are impeding export of Russian food and fertilisers to the global market.

Western governments are explicitly not imposing sanctions on Russian agricultural and food products, although the EU has implemented an import ban on fertiliser.

“We emphasise that the extension of the grain deal, the term of which is 120 days from the date of signing, would be facilitated by tangible results for Russian foreign trade operators equivalent to those we are seeing for Ukrainian exports,” said Mr Nebenzya.

“So far there are still significant reserves in this part of the grain deal.”