Lloyd’s List weekly showing of the data and figures behind our news, analysis and markets coverage

A total of 689,649 tons of grains and foodstuffs has been exported from Ukraine’s Black Sea ports, transpacific rates continue to slide and Algoma links up with Furetank for eco chemical tanker order 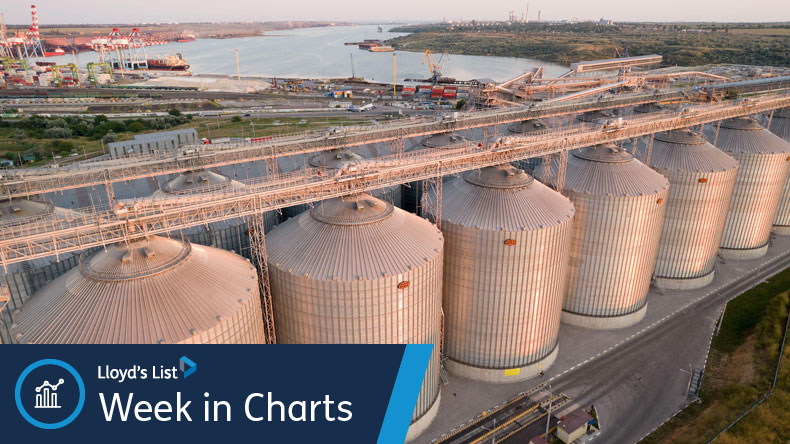 Just under half of the vessels that have departed the export hubs were pre-invasion arrivals, according to Lloyd’s List Intelligence data.

The port of Chornomorsk has been the busiest, seeing 28 outbound sailings since the beginning of August.

A total of 689,649 tons of grain and foodstuffs has been exported as of August 21, according to the Joint Coordination Centre.

The joint venture, to be named FureBear, will be owned equally by the two shipowners and will own two 18,000 dwt “Vinga-class” ships, which were ordered by Furetank in January and July for delivery in 2023 and 2024.

The order brings the total contracts for this series of tankers, designed by Swedish consultancy FKAB Marine Design, up to 13, of which eight are already in service in the Gothia Tanker Alliance where Furetank is a leading partner.

China’s ports take up one-quarter of the top 100 ranking positions, and just under 40% of total teu trade — or 264.5m teu — handled by the world’s elite container facilities.

With the top 10 unchanged, it also meant that China still lays claim to having seven ports to its name among the 10 largest globally. As many as 16 Chinese ports held ranking spots in the top 50.

In short, China’s dominant role in global containerised trade continues unwavering. And, while there is evidence of further growth at ports in Southeast Asia, as more companies set up manufacturing bases in the region, talk of a shift of production away from China is wide of the mark.

Spot rates on the China-US west coast trade have dropped below $5,000 per feu, with weakening market sentiment playing one carrier off another for lower prices, writes APAC editor Cichen Shen.

Drewry’s Hong Kong-Los Angeles container rate benchmark this week reported a 7.4% drop to $5,219 per feu, the steepest week-on-week decline since the index began to head south in March this year.

The ongoing economic slowdown could be the much-needed break that helps alleviate supply chains.

The Organisation for Economic Co-operation and Development, the International Monetary Fund, Oxford Economics and the likes have all been hurriedly downgrading economic forecasts in 2022 as increasingly gloomy developments give rise to further risks.

Further, a worse-than-anticipated slowdown in China, reflecting Covid outbreaks and lockdowns, plus additional negative spillovers from the war in Ukraine have all jolted a world economy already reeling from the pandemic.

London-based consultancy Drewry has significantly lowered its forecast for volume growth in 2022 since the start of the year.

However, further downward revisions are expected, according to senior analyst Eleanor Hadland.

Turkey-owned ships made up 43% of the vessels that arrived, or were due to arrive in Ukraine’s export hubs, as of August 18.

Lloyd’s List’s record of global container throughput totals stretches as far back as 1973. Comparing the ports that held the top-ranking positions nearly half a century ago with those of today, the regional variation is immediately apparent. Yet perhaps even more striking is the astronomical rise in port volumes.

Charting the fate and fortunes of the world’s elite container facilities over the decades is reflected in the changing face of containerisation.

Singapore was the second busiest port in 2021. The box port has been one of the busiest since 1988.

Major ports connected to and along the River Rhine are receiving more commercial vessels than in the past year, despite severely low water levels that are inhibiting transport, indicating that it is cargo volumes that are taking the hit.

Between July 25 and August 14, just after the water levels in the Rhine began to fall to concerning levels, major ports connected to the waterway recorded more arrivals than over the same period in 2021.

One Hundred Ports: The numbers tell the story